What Causes Oral Syphilis and How Do You Treat It?

According to the Centers for Disease Control and Prevention (CDC), more than were diagnosed in 2018. Of those, 35,000 were primary and secondary syphilis, or the earliest stages of the infection.

When syphilis is spread during oral sex, bacteria enter a cut or opening in the lining of the lips or mouth. The resulting infection is called oral syphilis. Lesions from the infection typically appear where the bacteria entered your body.

Syphilis is divided into three stages:

These stages help you understand what symptoms you might experience. It also helps doctors understand which treatment to offer.

While syphilis is a common STI, it can have long-term and potentially serious consequences if it’s not diagnosed and treated properly. Read on to learn more about how syphilis is shared and how it’s treated.

Causes of syphilis in the mouth

Oral syphilis is an STI caused by the bacteria Treponema pallidum. It can enter the body through cuts or sores in the vagina, penis, anus, or mouth.

Less commonly, syphilis can be spread through close, unprotected contact, such as kissing. However, it’s not spread through sharing eating utensils or drinking glasses.

A chancre, or round, firm sore, is likely to develop where the bacteria entered your body. This chancre is typically painless and is one of the first signs of syphilis in the mouth.

Symptoms of syphilis in the mouth

Oral syphilis can be a bit difficult to spot. That’s because the symptoms of syphilis look like many other conditions, including a pimple. Also, the sores aren’t usually painful.

Symptoms of different stages of syphilis sometimes overlap. Not everyone experiences these symptoms in the same order or at the same time.

These are the most common symptoms of syphilis by stage.

Diagnosing syphilis in the mouth

Simply observing a chancre isn’t enough for a diagnosis. A doctor or dentist will want to draw blood or take a fluid sample from the sore for further testing.

A biopsy of tissue or fluid is sometimes used to diagnose oral syphilis. This allows a doctor to see the bacteria under a microscope.

More likely, however, a doctor will draw blood for two blood tests—nontreponemal and treponemal tests. Neither test alone is definitive, but the two tests together can confirm a diagnosis of syphilis.

In primary and secondary stages, the treatment is one injection of this antibiotic. In later and unknown duration stages, the dose of the antibiotic will be the same but requires multiple injections.

It’s important to complete treatment if you receive a diagnosis of oral syphilis. Left untreated, syphilis sores may go away on their own in a few weeks. However, that doesn’t mean the infection is gone. The bacteria is still present in your body and additional symptoms are likely to appear later.

What’s more, untreated syphilis can cause long-term damage to your organs, such as your heart and brain. Ultimately, this damage can be fatal.

It’s a good idea to abstain from sexual contact with new partners until your sores are completely healed and your doctor confirms the bacteria is no longer present in your blood. To confirm this, your doctor may request you come back for blood tests every 6 months for a year.

Treatment is vitally important, as untreated syphilis can lead to long-term and potentially serious complications. This includes organ damage and failure.

Once you’ve been treated, it’s still possible to get the infection again. It’s important you tell all sex partners about your diagnosis so they can be tested and treated if necessary. Otherwise, you may get reinfected and require treatment again.

In the long term, the best way to prevent oral syphilis is to use consistent and correct barrier methods, such as condoms and dental dams, during sexual activity.

When in doubt about any unusual spots or symptoms, it’s a good idea to see a doctor. It’s important to get an early diagnosis for the highest likelihood of success and the lowest risk of long-term complications. 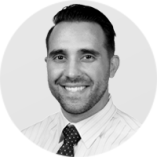