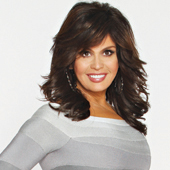 Between a string of successful singles, starting with her number-one country-pop ballad “Paper Roses,” hosting duties on The Donny & Marie Show, and subsequent film roles, Marie Osmond was undoubtedly one of the most enterprising entertainers of the 1970s. Four decades later, at 52, the mother of eight still maintains one of the busiest schedules in show biz with a longstanding co-residency at Las Vegas’ Flamingo Hotel Showroom and top-selling country album with brother Donny, both titled Donny and Marie, a successful stint on Dancing With the Stars, and two bestselling autobiographies chronicling her bout with depression. In her spare time, she designs award-winning doll collections, oversees Children’s Miracle Network, which provides state-of-the-art health care and research through 170 children’s hospitals, and acts as spokeswoman for the American Heart Association, “Go Red for Women,” and Nutrisystem, through which she’s achieved and sustained an impressive 50-pound weight loss. Osmond took a break from her many engagements to chat with Healthline about her amazing transformation, working with brother Donny again, and the sage advice her grandmother gave her about aging.

What's it like recording with Donny again and what can fans expect from the new album?

I finally got Donny to be ‘A Little Bit Country,’ too. Our new album is ‘Donny and Marie.’ Yes, Donny came up with the title. Isn’t he creative? [wink].  It was our first time to record together in 28 years. Our Osmond fans had been asking us to record together for decades, so we decided that since we were working together five days a week in Las Vegas, this was the perfect opportunity to produce a new album. Legendary Nashville producer, Buddy Cannon put the album together and it features great songwriters like Carole King, Babyface, Gavin DeGraw, and Richie Sambora.

How has the Vegas show been going?  What keeps your interest night after night?

When we originally reunited to perform in Vegas in 2008, we had a six-week contract.  Those weeks all sold out and we were asked to extend for two years and then another two to the end of 2012. It’s been a perfect opportunity, especially when I was a single mom, because I moved my family from Utah to Las Vegas and I could travel less and be with my kids more.

Las Vegas audiences are great and their energy and enthusiasm is infectious. Being on stage and going all-out every night is the best way to forget your worries. I’m always still a bit nervous before every show, concerned that I do the best I can for every audience. As a performer, I think if there comes a day when I don’t have butterflies in my stomach before a show, then I should retire. That hasn’t happened and I still look forward to performing and having fun with our audience.

Your recent single is called ‘The Good Life.’ Have you achieved the good life, and what is the good life to you?

The good life is a state of mind. It’s your attitude about life. There is no problem-free life, no matter what your circumstances happen to be, so it’s about keeping perspective and staying hopeful. Every day brings you things that you can enjoy, even if it’s as simple as eating an orange. Sometimes we’re so focused on ‘what’s next’ that we miss the blessing in today.

We all go through very low times and some suffer more than others, obviously, but it often comes down to choosing how you will let your circumstances affect your attitude. Personally, my faith has carried me through every single day.

Do you think that your weight loss has opened new doors for you again in music?

I know that weight loss has opened new doors for me in every aspect of my life. I learned a lot about portion size and balancing proteins and carbs for optimal weight loss from doing the Nutrisystem program. I’ve seen and spoken to many women who feel like they have a whole new life after losing pounds on Nutrisystem.  My physical health has improved. My knees and joints thank me every day, especially trying to keep up with four kids under age 16!!!  [laughs] I think, as a performer, losing weight has made me feel and look younger and that has translated into me having more energy to put into new projects.

What inspired you to lose weight?

One word—spandex! I was going to be a contestant on Dancing With the Stars. I had watched the show and saw the costumes… or should I say lack of costumes… that the females wore. I didn’t want to have to present myself in spandex to the world when I was heavier than I had ever been in my life.  One evening, about two months before the show started, I was at QVC doing a show for ‘Marie Osmond Porcelain Dolls.’ I had decided to start dieting that week and was in the process of researching the variety of diets available. Later there was a QVC show for Nutrisystem and I watched it in the dressing room and thought, ‘This diet could actually work with my life.’ They couldn’t make it any easier to be able to lose weight.

What can you do now that you couldn't do before?

Breathe deeply! Seriously, I didn’t realize how much 50 extra pounds was taking away from my ability to get enough oxygen. Onstage, carrying the extra weight, I’d be out of breath before the end of the opening song. That’s not a problem anymore.

As the spokesperson for Nutrisystem, what makes Nutrisystem different than other diet programs?

Everything is done for you, and I can’t even tell you how much that helps when you have a busy life. Let’s face it, many of us go for fast food because we don’t have the time or energy to do something else. Nutrisystem is healthy, fast food that will also help you lose weight. Nutrisystem does the work of balancing the nutrition, counting the calories, and measuring the portions for you, and it all comes right to your front door every month. To date, I have lost 50 pounds on the Nutrisystem program and still maintain my weight on Nutrisystem and usually eat at least one Nutrisytem meal or snack every day. The bars they have created are so good and nutritious that I carry some in my bag every day. That way, if I get hungry, I’m not tempted to grab a bag of potato chips. Also, they now have a protein shake that I drink before shows and it carries me through a constantly-active, two-hour show.

Donny once teased Rosie O'Donnell about her weight on her show.  What was your response then and how do you feel about it now?

Oh, trust me, I made him pay for that thoughtless remark. He went back on her show and got down on his knees in a puppy costume to ask forgiveness. I know he never intended to hurt her feelings. I think that people who have never had a weight issue can’t quite comprehend what a sensitive everyday issue it can be for those of us who have had one. Mostly, I think we have to get past this media-promoted image that to be an attractive woman you have to wear a size zero or two. We need to take the spotlight off of body size and put it on the heart and mind and life achievements. After all, no one ever becomes memorable in history for the accomplishment of being a size zero. 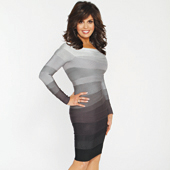 Absolutely. My mother loved to sew and made most of our clothing, including my brother’s costumes when they were first starting out as The Osmond Brothers. I learned to sew at her elbow and she was the first to teach me a love of design and fabrics. My mother always had a project going and I’m just like her that way. Heartfelt Giving is a book I created in 2010 to make projects easier for beginner and intermediate quilters and sewers. The patterns come with the book, so it’s all-inclusive. I get a lot of emails and Twitter and Facebook comments from women who have tried it for the first time and love it. That’s exactly what I hoped would happen.

What advice do you wish you had been given about aging from your mother?

My mother was very open about what it meant to be a woman at every age. Probably the best aging advice I got was from my Grandmother Osmond. She said: ‘Always take care of yourself, because no one else will.’  When I was younger I thought that seemed negative, but now I realize that what she said is the simple truth of the matter: No one can make you eat healthy, get enough rest, take care of your body with exercise, or keep you mentally active. You have to choose to do those things for yourself.

Learn more about what happens to us as we age.

What do you think when you look back at “Paper Roses”-era Marie Osmond?  In which way have you grown the most?

Life experience and hopefully wisdom gained by learning through those experiences. I was a 12-year-old child when I recorded Paper Roses, even though I was working in a very adult business. I think I learned a number of things the hard way. However, still being in this business for over four decades has given me a strong sense of self.