Man 2.0: How to Support the Men You Love with Their Mental Health

Many men don’t know how to ask for help.

By Dan Doty on October 14, 2020 — Fact checked by Jennifer Chesak
This is Man 2.0, a call for an evolution in what it means to identify as a man. We share resources and encourage vulnerability, self-reflection, and empathy from us to our fellow man. In partnership with EVRYMAN.

One of the scariest moments in my life was a near-drowning in my early 20s. I was in the jungle in Ecuador, studying and learning about indigenous culture.

A group of fellow students and I were down on the Napo river, a big, broad, brown stretch of water. We were with some local kids who wanted to swim out to a nearby island.

We were having a total blast.

It was a perfect day, and we were all just going with the flow. It was a beautiful scene — a really special moment in life.

But at the time I was a terrible swimmer.

I didn’t overthink it and just followed suit. I dove in and started swimming. I wasn’t prepared for the current and I misjudged the distance. It was a swim I should not have attempted.

Halfway through, I cramped up and panicked.

I don’t know how long it lasted, but I had to fight to keep my head above water. I was terrified and desperate. I could have easily drowned right there.

I’ll never forget how those moments felt. I was literally gasping for breath. I was in a complete panic and unable to call out.

Nobody knew I had just had a brush with death.

When mental health issues take hold, it often feels like drowning. It takes all of your effort to stay afloat, and it’s often impossible to shout for help.

This is especially true for men.

It’s even possible for loved ones to be right there watching the drowning occur. It’s scary, difficult, and confusing for them because they often want to help and don’t know how.

Men’s mental health has been statistically declining, with suicide rates towering over those of women. It’s clear that men are struggling now more than ever.

Thankfully, there’s a movement to help men learn they don’t have to struggle alone.

They can reach out, they can find a therapist, a men’s group, or a good friend. Help is now more available, and many people are fighting the old male stigmas and stereotypes.

Still, many men can’t or don’t know how to ask for help.

From the perspective of a parent, partner, sibling, or friend, it’s incredibly hard to know how to effectively approach and support a man who’s hurting and struggling.

Many people are in this position. If this is you, know that you’re not alone.

Showing up for men in need

Society is changing, and we can come together to learn how to better support men.

Here are 5 strategies to show up for a man in need:

Countless men I’ve worked with have seen a therapist, hired a coach, or started meditation because their spouse or best friend did first.

When these activities begin to bring about change, the man often doesn’t want to be left behind.

Men rarely respond well to being told what to do, lectured, or nagged. But whether they let on or not, they do want to feel better and change. If you take steps toward positive practices, men will notice.

But if you take care of yourself, get healthy, and find fulfillment, many men will see the writing on the wall and join in.

Strategy 2: The messenger is key

Men will take advice or direction from other men they admire or respect.

Many men believe that men who are willing to get help and support are “different” or “weak.”

There are many men who’ve never seen a single man in their inner circle be honest about their mental health.

For many men I know, it’s public figures like Joe Rogan or Tim Ferris. Both of these men have shared vulnerable messages, awareness, and openness about mental health.

Sometimes all it takes is hearing about mental health from someone you hold in high regard.

There are many men who’ve never seen a single man in their inner circle be honest about their mental health.

This is the direct approach — but with a few important distinctions.

Whether you’re a spouse, friend, or co-worker, he’ll respond best to your deeper, more vulnerable emotions.

Prepare for a conversation by slowing yourself down and zeroing in on the emotion that’s driving you to approach him. If it’s fear, own that. Then express it as authentically as possible.

You could say, “I’m scared to have this conversation because I don’t really know how to do it right. But what I’m really scared of is that I don’t know if you’re OK or not.”

Many men have very little vocabulary to express how they feel. You may need to lead by staying with your own emotion and letting him feel it.

In these conversations, don’t drive to a result or a fix right away. Be as vulnerable as you can. True emotions are deeply compelling, even to the most shut-down men.

If leading by example and vulnerable conversations aren’t moving the needle, it might be time to stand and fight for him when he can’t fight for himself.

One common trope that men use to stay on their island is “I don’t want you to worry.”

If this is a response you’re receiving, you can make it very, very clear that you are worried.

This is the moment for tough love: “Get in the car, I made you an appointment with a therapist.”

Or unplug his video game console and say, “I can’t live like this. We need to talk.”

Sometimes men will respond to the clear energy that someone is fighting for them. When they don’t have the capacity to stand up for themselves, a proxy might get the ball moving.

If a man is verging on or acting out destructive behaviors, immediate action is required. If suicide is a concern, get familiar with best practices immediately.

If a man is potentially suicidal, ask direct questions about their thoughts and feelings. Talking about it directly doesn’t push people to act. It offers an opportunity to not be alone in the experience.

At the same time, avoid blaming, shaming, or discounting what they’re feeling.

Trust your gut and get help. Don’t attempt to do it alone.

Help is out there

If you or someone you know is in crisis and considering suicide or self-harm, please seek support:

While you wait for help to arrive, stay with them and remove any weapons or substances that can cause harm.

If you’re not in the same household, stay on the phone with them until help arrives.

Every man that’s struggling has his own path to walk, and these strategies aren’t effective every time for every man.

Often, we need to continually employ multiple strategies to make it work. There’s no one-size-fits-all approach.

In these intense times, we need each other more than ever. If you’re attempting to approach a man who’s struggling, it’s important that you have others to turn to as well.

Make sure you don’t get in over your head to save someone else.

Dan Doty is the co-founder of EVRYMAN and host of the EVRYMAN podcast. EVRYMAN helps men connect and help each other lead more successful, fulfilling lives through groups and retreats. Dan has dedicated his life to supporting the mental health of men, and as the father of two boys, it’s a very personal mission. Dan is harnessing his voice to help support a paradigm shift in how men take care of themselves, others, and the planet. 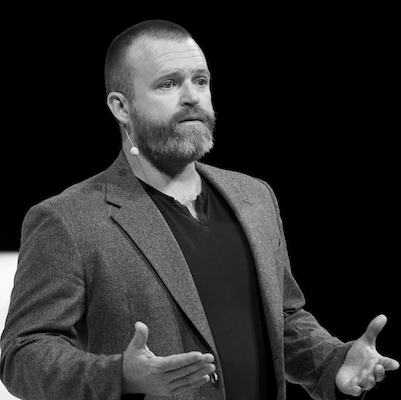