It’s trendy. It’s fun to eat. And for those who have an affinity for sticky rice and seafood, sushi is delicious. But not all sushi is created equal. Some pack an impressive nutritional punch, while other forms of the Japanese food may add significant cushioning to your waistline.

Whether maki or nigiri, how healthy your sushi is depends on the ingredients. The type of rice, the toppings, the fillings, and the type of fish (or lack thereof) all play a role.

Overall, sushi is healthy, but choosing the best sushi takes a little practice. Read on for our tips on how to choose the healthiest rolls!

What Exactly Is Sushi?

We usually think of sushi as raw fish, but this isn’t the case at all. The term “sushi” refers to white, sticky rice that’s seasoned with sweet rice vinegar and forms the basis of the dish. However, while rice is the foundation, it’s often what’s added to the rice that gets the most attention.

Generally, when we think of sushi, we think of maki rolls. These are made by rolling rice and various other ingredients in a sheet of nori, a type of dried seaweed. Another form of sushi is nigiri, which is not wrapped in a roll. This variation is a piece of raw or cooked fish that’s pressed onto a ball of rice. 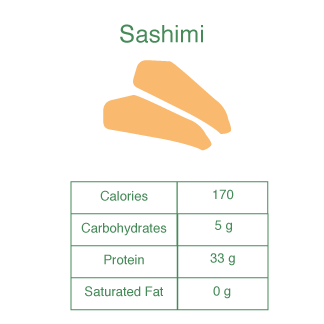 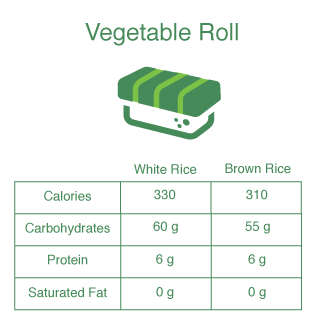 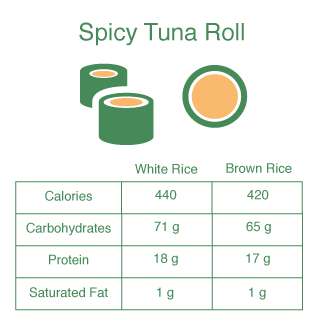 White rice is a simple carbohydrate, which means it’s heavily processed and quickly raises blood sugar when eaten by itself. However, the additional ingredients found in sushi usually make it quite a healthy meal choice. Cucumbers, avocado, and fish are all high in healthy fats and protein and make for a satisfying and complete meal.

While the ingredients and nutritional components of sushi vary from restaurant to restaurant, having a general idea of what you’re getting into can help you make the healthiest decisions.

How to Select the Healthiest Sushi

When it comes to choosing the best sushi for your health goals, it’s important to remember that sushi can be prepared differently from one chef to the next. In other words, a scorpion roll at one Japanese restaurant may not have exactly the same components, quantities, or nutritional make-up as a scorpion roll at the next joint. So be aware of the differences and don’t be afraid to ask. In general, you want to:

Though sushi rice is traditionally white, most sushi restaurants will also prepare it with brown rice on request. Using brown rice instead of white can add a bit of fiber to your meal.

Sashimi is raw fish — no rice or additional ingredients. Though not everyone loves it, you may find you like this lower-calorie option.

3. Say No to Tempura

Tempura is the process of battering and then frying food, usually seafood or vegetables. It’s often used in sushi preparation. If you see tempura, you know at least some of your ingredients have been fried.

California rolls and spicy tuna rolls are just two examples of rolls that often have cream cheese or mayonnaise in them. They’re completely unnecessary and high-calorie additions to your sushi, which is just as delicious without them!

Many sushi restaurants sell fancy rolls, or rolls that are many times larger than the traditional variety. By opting for the smaller, more traditional rolls you can save yourself some calories and sample a greater variety. Traditional roles are usually much cheaper, too!

Soy sauce, miso dressing, and peanut sauce are just a few options when it comes to dipping your sushi. But these additions add up quick. One packet of soy sauce contains 489 mg of sodium, over 20 percent of your recommended daily intake and peanut sauce can add a significant amount of calories as well as sodium.

*The nutritional information comes from Genji, a company that provides fresh sushi to several grocery chains, including Whole Foods.