Domestic Violence: Hurting the Economy as Well as the Victims

Domestic violence, sometimes referred to as interpersonal violence (IPV), directly affects millions of people in the United States every year. In fact, nearly 1 in 4 women, and 1 in 7 men, experience severe physical violence from an intimate partner at some point in their life, according to the (CDC).

These estimates are likely low. Because of the pervasive social stigma associated with IPV, many individuals directly impacted by it are unlikely to report it, due to victim blaming, racism, homophobia, transphobia, and other related prejudices.

Research has, time and again, found correlations between certain events and holidays, and rates of domestic violence reports. One 11-year study that looked at almost 25,000 incidents of partner maltreatment saw significant spikes of reported IPV on Super Bowl Sunday. The figures were also higher on New Year’s Day and Independence Day.

In 2015, the National Football League teamed up with the No More campaign to air an anti-domestic violence spot during the game. It featured a real call to 911 by a victim of IPV, who had to pretend she was ordering pizza when she was actually talking to a local police dispatcher.

This was a rare, and much needed, instance of violence in the home being presented as an issue that needs to be tackled on a national level. IPV is often portrayed as a private issue by the media and criminal justice system. In reality, such violence — which need not even be physical — creates ripple effects that extend to entire communities and beyond. As we look forward to kick-off on Super Bowl 50, 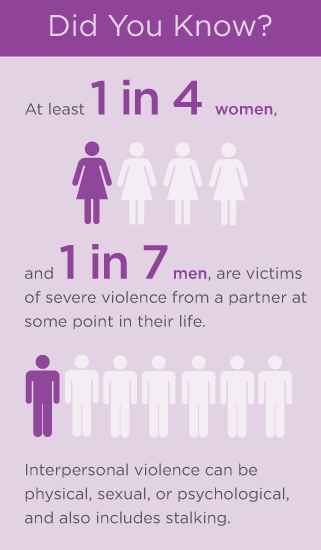 An intimate partner is anyone with whom a person has “a close personal relationship,” according to the . That can include both current and former sexual or romantic partners.

Intimate partner violence is a pattern of coercive or controlling behaviors. These may take any (or any combination) of the following forms: 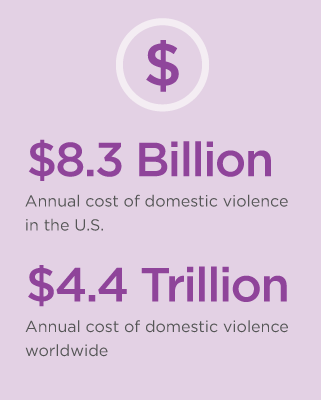 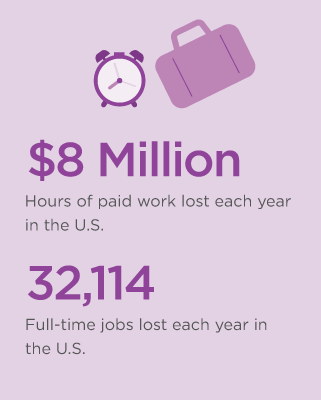 When we think about how much domestic violence costs, we tend to think in terms of direct costs. These might include medical care, and the costs of policing, incarceration, and legal services.

But IPV also incurs a host of indirect costs. These are the long-term effects of violence that impact the victim’s quality of life, productivity, and opportunities. According to the World Health Organization (WHO), these might include psychological costs, lessened productivity, lost earnings, and other nonmonetary costs.

According to a 2004 study from the , the total cost of IPV against women in the United States exceeds $8.3 billion each year.

That research relied on 1995 data, so in 2015 dollars, this number is likely to be much higher.

Globally, according to the Copenhagen Consensus Center and using 2013 data, the annual cost of IPV worldwide is $4.4 trillion, which is about 5.2 percent of global GDP. The researchers note that the actual figure is probably much higher, because of underreporting.

To understand that the effects of IPV extend beyond the home, we need look no further than the toll IPV takes in the workplace. Data from the National Violence Against Women Survey (NVAWS) published by the estimates that women in the United States lose almost 8 million days of paid work each year because of IPV.

That’s the equivalent of 32,114 full-time jobs. And IPV affects household work too, with an estimated additional 5.6 million days lost.

In addition to lost workdays, IPV makes it more difficult for victims to concentrate at work, which may further impact productivity. A national poll conducted by the Corporate Alliance to End Partner Violence (CAEPV) in 2005 found that 64 percent of IPV victims felt that their ability to work was at least partially the result of domestic violence. 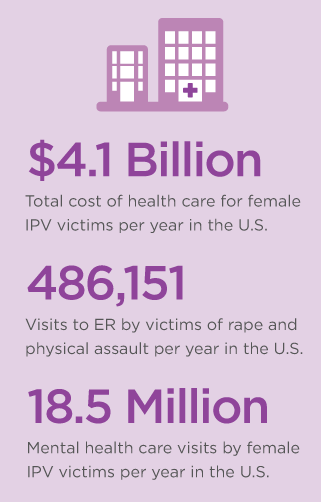 The physical health costs incurred by IPV are both immediate and long term. Based on 2005 data, the estimates that IPV results in 2 million injuries to women, and 1,200 deaths.

Treatment for IPV-related injuries is often ongoing, meaning that victims need to seek healthcare services multiple times. According to a national 2005 study, women who experience IPV-related injuries will need to visit the emergency room two times, see a doctor an average of 3.5 times, visit a dentist an average of 5.2 times, and make 19.7 visits to physical therapy.

Whether physical or psychological, IPV is traumatic. Data from the 1995 shows that 1 in 3 female rape victims, over 1 in 4 physical assault victims, and nearly 1 in 2 stalking victims sought mental healthcare services. The number of visits on average ranges from nine to 12, depending on the trauma experienced.

It is difficult to put a dollar amount to such visits given the complexity of the U.S. healthcare system, but estimates from a indicate that IPV can cost anywhere between $2.3 to $7 billion “within the first 12 months after victimization.”

The Costs to Children

IPV also directly affects children exposed to it, and in multiple ways. IPV and child abuse co-occur in 30 to 60 percent of U.S. cases, according to a 2006 report from the National Institute of Justice.

In 2006, UNICEF estimated that 275 million children around the world were exposed to violence in the home; that number has likely increased. Their findings suggest that children who are exposed to violence may have emotional or behavioral problems, be at greater risk of experiencing physical or sexual assault, and may be more likely to mimic abusive behaviors. (Note: Abuse is always a choice made by a perpetrator; not all children who witness abuse go on to perpetrate abuse.)

These findings underscore the fact that violence is not a private problem, but in fact a cycle that affects children, their peers, the workplace, and, by extension, all of us.

It is important to reiterate that the cost of violence is difficult to pin down for a variety of reasons, and the estimates given here are likely low. Taken in conjunction with the emotional and physical tolls on victims’ families, friends, and communities, the cost of IPV in the United States is a bill we simply cannot afford to pay.

How Can You Help Someone Affected by IPV?

If a friend or someone you care about is being abused by their partner, the following tips can make a huge difference:

Check out the Center for Relationship Abuse Awareness for more tips on supporting a friend (or co-worker) who is being abused.

Where Can I Go for Help?

Many resources exist for victims of abuse. If you are experiencing abuse, make sure it is safe for you to access these resources on your computer or phone.