Evolution of Our Innovation Project

The DiabetesMine Innovation Project began in 2007 as an idea to improve the functionality and aesthetics of the medical devices and tools that patients with diabetes use — and often wear on their bodies — every day of their lives. The initiative went viral, and quickly developed from online conversations into the DiabetesMine Design Challenge, an international crowdsourcing competition that has awarded over $50,000 in prize money over the years.

In Spring of 2007, DiabetesMine editor-in-chief Amy Tenderich posted an Open Letter to Steve Jobs, calling for the gurus of consumer design to help revolutionize design of diabetes devices. The outcry was picked up by TechCrunch, the New York Times, BusinessWeek and a whole bunch of other leading blogs and publications.

San Francisco-based design firm Adaptive Path came forward to tackle the challenge head-on. Their team created a prototype for a new combo insulin pump / continuous glucose monitor called the Charmr. Unlike anything designed for diabetes before, it was about the size of a USB stick, with a flat, color touch screen and can be worn on a chain as a necklace or dangled on your keychain!

Watch the video about this visionary creation here:

Inspired by the passion and commitment to device innovation, we launched the first annual DiabetesMine Design Challenge in Spring 2008. We sparked the imagination of hundreds across the nation and globe, and received press from dozens of health and design publications.

In 2009, with the help of the California HealthCare Foundation, we brought the contest to a whole new level with a Grand Prize of $10,000. That year, we received over 150 amazingly creative entries from students, entrepreneurs, developers, patients, parents, caregivers and more.

The 2009 Grand Prize winner was a system integrating an insulin pump right into the iPhone, called LifeCase/LifeApp. Samantha Katz, a Northwestern University graduate student who co-created the LifeCase concept, went on to become an insulin pump product manager at Medtronic Diabetes Care. She also became one of our esteemed judges.

In 2010, we expanded the honors to three Grand Prize Winners, each receiving $7,000 in cash, plus a package aimed at helping them move forward with their design idea. Once again, dozens of universities participated, including Carnegie Melon, MIT, Northwestern, Pepperdine, Stanford, Tufts, UC Berkeley and the University of Singapore, to name a few. The Zero is a great example of a visionary combo diabetes device from a talented freelance designer, this one from Turin, Italy.

In 2011, we continued our three Grand Prize packages, awarding the prizes to Pancreum, a futuristic wearable artificial pancreas; the Blob, small, portable insulin-delivery device for discreet injecting; and iPhone app to help encourage young people to test their blood sugar.

We’re especially proud of the fact that this contest motivated many young designers to focus on diabetes and health issues, to improve life for everyone living with chronic illness.

And we’re equally excited to report that, according to the Chicago Tribune, the DiabetesMine Design Challenge “generated a buzz in the industry and ... help(ed) revolutionize the design of diabetes devices for the nation’s 24 million diabetics.”

In 2011, we also turned our attention to the Next Big Challenge in improving quality of life for people with diabetes: fostering collaboration among diabetes design stakeholders.

We launched the first-ever DiabetesMine Innovation Summit held at Stanford University. The event was an historic, invitation-only gathering of the various stakeholders involved in designing and marketing tools for living well with diabetes. 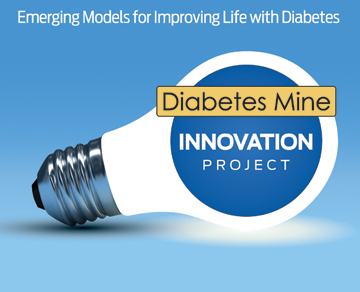 The aim was to kick off a new era of collaboration among these groups and assure that the actual users of these products (us patients!) are central to the design process.

In 2012, in order to involve even more vocal e-Patients, we hosted our first-ever DiabetesMine Patient Voices Contest.

We issued a call for short videos in which patients articulate their wishes and ideas for how best to meet patient needs. Ten winners received full scholarships to attend and participate in the 2012 DiabetesMine Innovation Summit.

The 2012 event drew over 100 experts, including the three senior FDA directors; the CEO and Chief Medical Officer of the American Diabetes Association; the CEO of Joslin Diabetes Center; several famous endocrinologists, researchers and CDEs; and representatives from the following organizations:

The Innovation Summit continued to grow, with the theme, “delivering on the promise of diabetes technology.” Our event featured live updates from the FDA and five of the nation’s top health insurance providers. Attendance topped 120 movers and shakers in the diabetes and mHealth world.

In order to dig deeper into the hot issues of data sharing and device interoperability, we hosted the first-ever DiabetesMine D-Data ExChange event at Stanford, a gathering of key innovators creating applications and platforms that leverage diabetes data to produce healthier outcomes, reduce healthcare costs, increase transparency to policy decision-makers and care teams, and improve prospects for patient engagement. This is now a biannual event.

To learn about the DiabetesMine Innovation Events, please visit:

The DiabetesMine Design Challenge: Blast from the Past

Check out our 2011 innovation winners »

Browse a gallery of 2011 contest submissions »