Lyme disease can usually be cured with antibiotics, but there is debate in the scientific community about people whose Lyme disease is chronic.

Lyme disease is a bacterial illness carried by ticks. Although other animals are capable of carrying the bacteria, transmission to humans from other animal sources has not been fully supported by the current scientific literature. The Infectious Diseases Society of America (IDSA) maintains that it is easily diagnosed and usually curable with a short course of antibiotics. The IDSA represents 9,000 U.S. doctors.

But a growing number of Americans are saying their Lyme disease symptoms persist well beyond the three-week course of antibiotic treatment. They complain of muscle aches, headaches, and fatigue. They have found doctors to treat them with more antibiotics, but not without controversy.

The number of Lyme disease cases in the United States more than doubled from 1995 to 2009, to almost 30,000, according to the IDSA, but the U.S. Centers for Disease Control and Prevention (CDC) that Lyme disease cases may be up to 10 times higher than reported. Talk of chronic Lyme disease has been gaining momentum, with famous doctors such as Dr. Richard Horowitz making the talk show rounds.

Patients who describe general symptoms such as achiness and fatigue plead for doctors’ help. Those who are diagnosed with fibromyalgia and chronic fatigue syndrome sometimes have the same reaction. But in the case of Lyme disease, doctors aim to cure the illness with long-term antibiotics, not just manage symptoms.

Medical boards in states such as New York have questioned doctors who prescribe antibiotics for “post-treatment Lyme disease syndrome,” as the CDC. Organizations such as LymeDisease.org are battling to have the IDSA treatment guidelines removed from the National Guideline Clearinghouse, a branch of the U.S. Department of Health and Human Services.

“The people behind pushing this ‘syndrome’ (including numerous people who have chronic fatigue and other conditions that are difficult to diagnose and treat, and who are therefore looking for answers) have gained remarkable political power,” Dr. Otto Yang told Healthline. Yang is an infectious disease specialist at the University of California, Los Angeles (UCLA).

A bill to shield doctors in New York from the retribution of government regulators for treating chronic Lyme disease patients with antibiotics is sitting on Gov. Andrew Cuomo’s desk now.

Doctors promoting the bill say their patients have “chronic Lyme disease,” an ongoing condition caused by the original infectious tick bite. They choose to treat it with antibiotics beyond the stated IDSA guidelines. Some of these doctors place patients on antibiotics intravenously for six months or even longer, Dr. Daniel Cameron told Healthline.

Cameron serves as president of the International Lyme and Associated Diseases Society (ILADS). He declined to say how many members the organization has. ILADS is the engine behind the chronic Lyme disease movement. 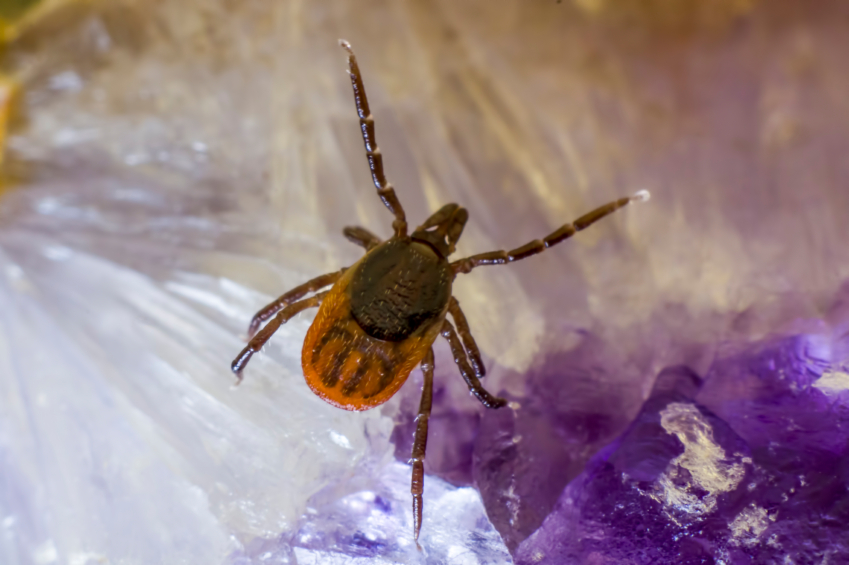 The blacklegged tick (Ixodes scapularis) transmits Lyme disease in the Northeast and Midwest. It can be distinguished by its red body and black legs.

Although the widely accepted Western blot test used by most doctors to test for Lyme disease may come back negative, Cameron says patients can get tested elsewhere and receive a positive result.

For example, a company called IGeneX offers testing using the Western blot, but says their technique is more sensitive. It has two extra protein “bands” to better detect an ongoing Lyme disease infection, Cameron said. The president and CEO of IGeneX, Nick Harris, Ph.D., was one of the founders of ILADS.

Cameron authored a 2010 article “Proof that Chronic Lyme Disease Exists” in the journal Interdisciplinary Perspectives on Infectious Disease. In it he laid out research showing that some people with Lyme disease have symptoms for six years or longer after completing the standard treatment. Thinking problems, arthritis, and nerve damage can be debilitating for these patients.

In the article, Cameron quotes the Dr. Mark S. Klempner trials as showing that such patients have a quality of life equivalent to that of someone with osteoarthritis or congestive heart failure. But the Klempner trials, published in the New England Journal of Medicine, also concluded that prolonged antibiotic use (for 90 days) was so ineffective that the data and safety monitoring board recommended the trials be discontinued.

“States have been lobbied to cover treatment of this syndrome, since it is not recognized by insurance as a real disease,” Yang said. But Cameron said insurers often do pay for the treatment.

Find Out More About the Lyme Disease Antibody Test »

Are Antibiotics a Prescription for False Hope?

“In some cases, people may have serious illnesses that do not get diagnosed because they think this is the answer,” Yang told Healthline. “Also note that many people feel better on antibiotics, but the mind is powerful, and it is well known that the placebo effect is generally 40 to 50 percent when the evaluation of a treatment is subjective (e.g. fatigue, mood, insomnia, appetite … anything that depends on human perception).”

“In some cases, people may have serious illnesses that do not get diagnosed because they think this is the answer. Also note that many people feel better on antibiotics, but the mind is powerful, and it is well known that the placebo effect is generally 40 to 50 percent when the evaluation of a treatment is subjective.” — Dr. Otto Yang, UCLA

Cameron told Healthline that those bitten by a tick may not only be suffering from Lyme disease, but from other co-infections as well. Testing for co-infections is not easy.

He argues in his paper that doctors frequently treat patients for recurring infections, and Lyme disease should be no different. “They act as though the jury’s deliberated and there’s no reason to reconsider their position,” he says of the stance taken by the IDSA.

Cameron said the idea that patients are being needlessly treated with medications that cause uncomfortable side effects does not take into account the whole picture. “There are plenty of side effects from antibiotics, but there are plenty of problems if you don’t get well and are living with a chronic disease. Loss of job. Loss of education,” he said.

Cameron said people come to him who are in so much pain they cannot work and are also having relationship problems due to their illness. Most get better, he said, some in a month and some in a year. He said doctors who stop prescribing antibiotics after three weeks are missing an opportunity to help a patient.

CDC: We Are Not ‘Dismissing Your Pain’

Dr. Amesh Adalja, an infectious diseases specialist and an assistant professor at the University of Pittsburgh, says there is no scientific evidence to suggest an ongoing infection in patients with lingering Lyme disease symptoms. He said all infections require a recovery time beyond when the antibiotics run out. He said that continuing antibiotic treatment after a few weeks for people who have Lyme disease carries “a lot of risk and no real benefit.”

Adalja said the positive test results that some laboratories produce are just a way to support a doctor’s diagnosis. “It is not a valid way of approaching this,” he said. The CDC also warns against prolonged antibiotic use because it can drive the growth of bacteria that are resistant to antibiotic medications.

Oral antibiotics can cause gastrointestinal upset, and those who take antibiotics intravenously are subject to line infections. Last year, the CDC to halt unnecessary prescribing of antibiotics.

Yang said Lyme disease is a “very well understood condition, with close parallels to another old and well understood disease, syphilis, which is caused by a related … bacterium.”

The CDC’s online information on “post-treatment Lyme disease syndrome” skirts the controversy by emphasizing that all patients need personalized care.

“Your doctor may want to treat you in ways similar to patients who have fibromyalgia or chronic fatigue syndrome,” the CDC site says. “This does not mean that your doctor is dismissing your pain or saying that you have these conditions. It simply means that the doctor is trying to help you cope with your symptoms using the best tools available.”

Get the Facts: Is It Lyme Disease? Check Your Symptoms »