The Way to Wellville program challenges five small U.S. towns to become healthier in five years, and it could have a huge impact on the health of cities nationwide.

Can five small American communities turn their health around in five years? And if they’re successful, will other towns in the U.S. follow suit?

Esther Dyson, a renowned tech investor, is optimistic that the answer to both of these questions is yes. In May 2013, Dyson founded the nonprofit Health Initiative Coordinating Council (HICCup), which is sponsoring The Way to Wellville, a national competition to find five communities with a maximum population of 100,000, to compete over five years for the greatest improvement in five measures of health and economic wellbeing. HICCup has received applications from more than 40 communities.

Dyson, who is chairman of EDventure Holdings, is no stranger to turning big ideas into reality. She is an active angel investor, best-selling author, board member for 23andMe and Voxiva (txt4baby), and advisor focusing on emerging markets and technologies. From 2008 to 2009, she lived outside of Moscow, Russia, training as a cosmonaut.

Dyson’s excitement about The Way to Wellville is evident as she describes what, for most people, would be a very hectic itinerary to find the competition’s finalists. Speaking to Healthline from the airport in Portland, Maine, Dyson said, “We’re now visiting ten of the cities to find the final five. We were visiting Oxford County, which is about an hour north of here. On Friday we were in Scranton, Pa. Tomorrow we’re going to be in Clatsop County Oregon, and then on to Lake County, Calif. What I’m doing is fun.”

A Day in the Life

When Dyson visits these small communities, she said, “You meet one or two people who filled in the application. Then you meet the other people in the community who are working together in a coalition; ideally someone from a school, city government, employers, people from the Chamber of Commerce, the local health system, and the YMCA. A lot of nonprofits focus on everything from child abuse to pregnancy to mental health, and you ask them, how are you working together?

What are the challenges to health in your community? What are you doing about school food? What problems do you want to solve? What things are you doing that you would like to do more of but you lack resources? Do you lack financial resources? People almost always do. But what about the knowledge? Have you evaluated the impact of what you are doing?” 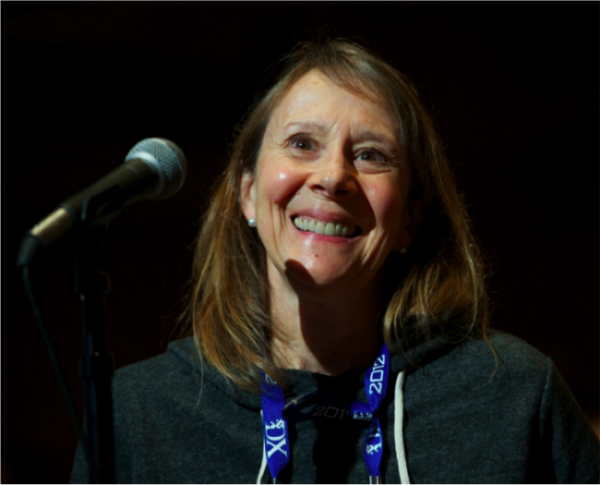 Dyson said the discussions have been very inspiring because the people in these communities are trying to make a difference in their own lives.

Poor access to food, including school lunches, is one of the most common problems she sees. “If you don’t have a car, you can’t drive to get healthy food and you can’t get a job. Bad health and poverty are very much intertwined,” said Dyson.

There may not necessarily be a winner in the Way to Wellville program, Dyson said. “We’re honestly not sure yet; like everything else, the whole thing is an experiment. We are going to talk to them and ask, what would work the best? There is some sense that we really don’t want to compete; we want to collaborate. We do want to have some kind of prize and publicity; the kind of thing that makes people get excited and care,” she said.

Dyson said the applications from all the communities were “so good, inspiring, and credible,” that in addition to the Wellville Five, Greater Wellville will be created. “It will be a network, a community, and a vendor platform for all 41 communities to share ideas and strategies with each other,” she said.

Dyson went on to say she is excited about the opportunities for these communities when outside resources discover them. “They have an interest in becoming dramatically healthier, and this has advantages for other entities that wish to get involved, such as a vendor who wants to do a pilot, or a funder that wants to fund somebody. They can find one of these places in Greater Wellville and reach out to them,” she said. “We are trying to create a place for these communities to find the resources that don’t even know these communities exist.”

How did Dyson come to focus on this new wellness venture? “I was a tech investor and getting increasingly uninterested in apps to find concerts and to help you organize your music collection. I wanted to deal with more interesting problems,” she said. “I got more involved in healthcare. I realized health is much more interesting than healthcare. Why fix it? Why not create it in the first place?”

Four years ago, Dyson learned about a healthcare contest, called XPRIZE, that involved health insurance companies. “I wanted to be a judge for this, but that never happened, and I kept thinking, that’s a really good idea. Someone should do that. Finally I realized, what about you?” she said. “I held a bunch of brainstorms to figure out how it should work. I changed it a bit from what XPRIZE was doing, to be physical communities of 100,000 people or fewer, and more focused on health, nutrition, bike sharing, and preventive health, and that’s what became The Way to Wellville.”

“We want people around the country to ask for healthy foods, to exercise more, and to do all these things — not as part of a program, but because this is the way life should be.” — Esther Dyson

Unlike other health initiatives, which are often undertaken by people who have a disease or a family member with a disease, Dyson said, “I don’t have anybody in my family who has died of cancer. For me it’s more like, I’m healthy. Other people should have the same advantages that I do. It’s not that I’m disciplined. I’m lucky. I have access to good food. I live in the city. I walk a lot. I’ve been swimming every day since I was 18.

There are a lot of people who live in places where their health is being undermined every day. They have bad conditions, poverty, and lack of access to exercise, and I wanted to change that. The causes vary and it’s not just obesity. It’s the things that come with obesity, such as diabetes. But if you change the environment, it’s just easier to make the right choices.”

A Better Way of Life

While HICCup plans to raise funds from private concerns, Dyson explained that the real goal is to help the communities assume that responsibility. “We don’t want the money to come through us; we want to help the community get access and interest from donors, but also vendors who want to do pilot projects, such as food companies who want to test healthy menus, and people who want to invest with social impact bonds,” she said. “There are lots of ways to raise money, not just from wealthy private donors.”

If HICCup is successful, one might think Dyson would want to expand the initiative nationwide. But she says no. “We want to prove how it works, and then we want other people to expand nationwide,” she said. “We want to show that it works and then we want other people to say, ‘We can do that, too, in bigger communities.’ We are going after smaller communities that don’t require as many resources. We want people around the country to ask for healthy foods, to exercise more, and to do all these things — not as part of a program, but because this is the way life should be.”

Find Out More About Wellbeing and Community Involvement »