A team of Harvard researchers has developed an inexpensive test that can identify sickle cell disease in 12 minutes. This could mean life-saving interventions for children with the disease, especially in low-resource countries like those in sub-Saharan Africa.

When these misshapen cells travel through small blood vessels, they get stuck and block blood flow. This causes pain and other serious problems, such as infection, acute chest syndrome, and stroke.

SCD is most common in West and Central Africa, where as many as 40 percent of people carry the genes for sickle cell disease, and up to 2 percent of all babies are born with a form of the disease. In Nigeria, with a population of about 177 million, about 150,000 babies with sickle cell disease are born each year.

, 90,000 to 100,000 people in the United States are living with SCD. Two million Americans carry the sickle cell genetic trait.

Test Will Save Lives in Low-Resource Areas

The new test, developed by Ashok A. Kumar, a postdoctoral fellow in the department of chemistry and chemical biology at Harvard University, and his colleagues, is a simple finger prick blood test. It provides results in 12 minutes and costs about 50 cents.

The test, which is described in a paper published in Proceedings of the National Academy of Sciences, may help identify children with the disease before the start of acute symptoms. This will allow for more timely intervention, especially in low-resource areas.

Speaking to Healthline, Kumar said, “The reason we worked on creating a low-cost, rapid, and simple test for SCD is because every year 300,000 children are born with SCD, and about 80 to 90 percent of these children are in Africa and India. Recent studies showed that in sub-Saharan Africa, between 50 and 90 percent of the children born with SCD die before the age of 5. Most of these children don’t have access to the healthcare infrastructure that we have in the United States and in Europe.”

Learn About a New Blood Test for Celiac Disease »

SCD is currently diagnosed by separating blood proteins through a process called gel electrophoresis. Every child born in the United States is screened for SCD. Kumar explained that this screening involves the use of very large, expensive equipment in centralized hospitals and some laboratories in the United States.

“If you are talking about some of these places where they don’t have centralized facilities, there are a lot of costs involved and the equipment is not available in many places. We are trying to create a test that is very cheap and that can be done on its own,” Kumar said.

The test Kumar and his colleagues have developed is simple and relatively painless. “You touch the tip of the tube to the blood and it will load automatically. Then you slide a piece to cover a hole and put it in a small centrifuge and spin it for ten minutes. Then you can look at it and read by eye to see if there is red at the bottom or not. This isn’t cleared as a diagnostic yet, but we found that if there is red at the bottom, it correlated very strongly with someone having SCD,” said Kumar. 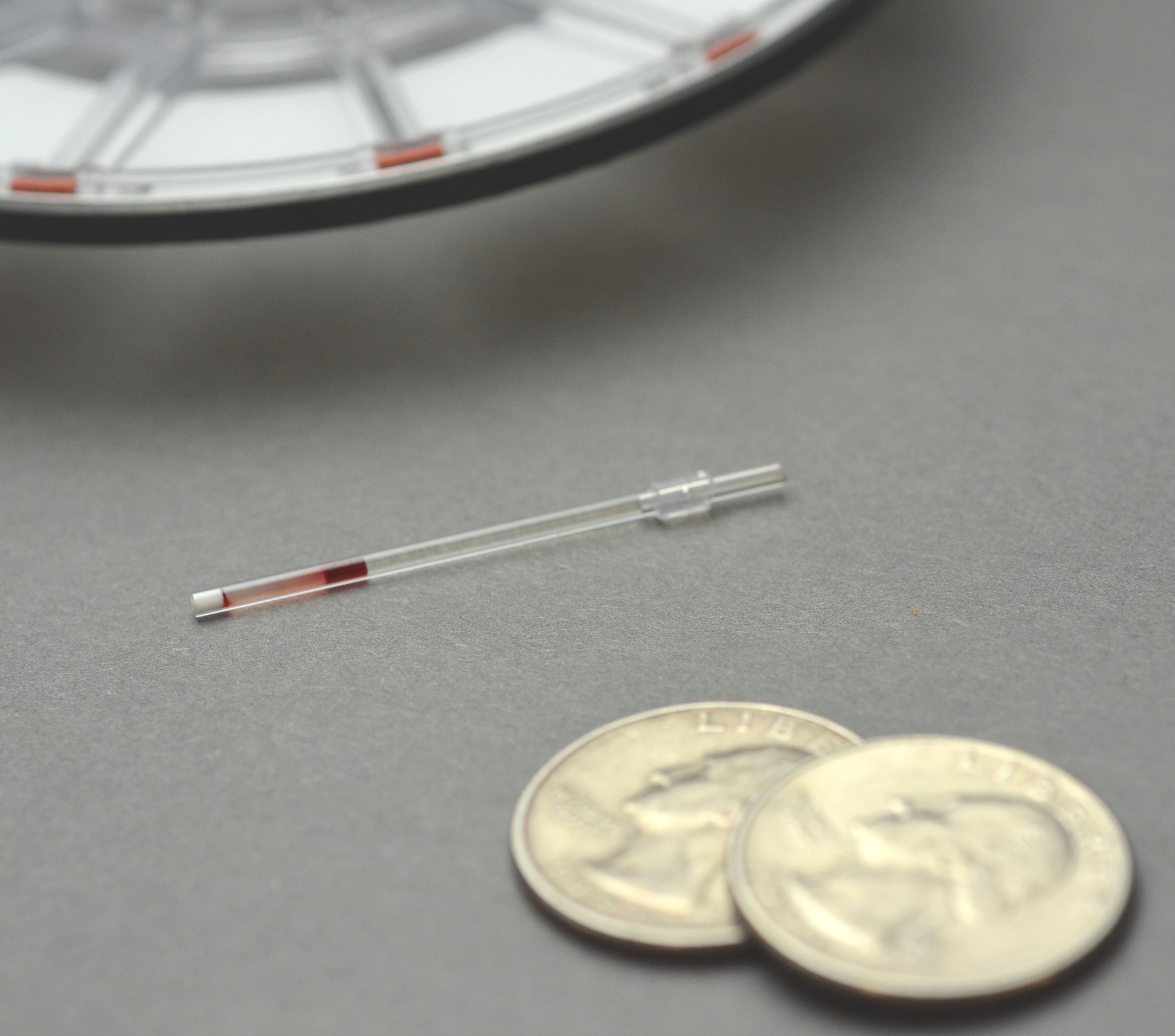 Photos in this article courtesy of Ashok A. Kumar.

The test is based on two simple ideas that have been in the scientific literature for decades. The first is that, in sickle cell disease, you get very dense blood cells. The cells form a sickle shape and also lose water and become more dense.

“People who have studied this have shown that if you compare blood from someone with SCD to those who don’t have SCD, they have a large number of very dense cells present in SCD. These dense cells are not present, generally, in someone who doesn’t have the disease,” said Kumar.

The researchers also based their test on the observation that when you mix different polymers together in water, they separate into different layers — as happens when you mix oil and water. “The oil, which is less dense, will sit on top of the water,” Kumar explained. “And if you were to drop something into that, it would sink or float to different positions, depending on how dense it was. Some things will float on the surface of the oil, some will sink to the bottom of the water, and some things will get stuck at the interface between the oil and water.”

Kumar credits hematologist Dr. Thomas Stossel of Brigham and Women’s Hospital in Boston, whom he met at a symposium, with encouraging him to work on a test for sickle cell disease. “Stossel had been working in Zambia for ten years with a nonprofit he and his wife have there. He had seen the need for a low-cost rapid test, and he felt this technology might be able to play a role there,” Kumar said.

Although the early findings are promising, more studies will be required to find out if the test is accurate enough to use in the field, Kumar said. Thus far, the researchers have conducted a field trial in Zambia. They have also received a grant from the Center for Global Health for another field trial in Zambia with the University Teaching Hospital there.

Read the Latest Updates on the West African Ebola Outbreak »

An Outside Expert Weighs In

Commenting on the development of the new test, Dr. Jeffrey Glassberg, associate director of the Mount Sinai Comprehensive Sickle Cell Program at Mount Sinai Hospital in New York, told Healthline, “In the United States, life expectancy for people with SCD more than doubled between 1979 and 2006. The primary drivers of this improvement were high quality preventive care and newborn screening. Newborn screening allowed every child with SCD to be identified at birth, so they could receive the best preventive care possible. It is especially important that children with SCD take daily penicillin for their first five years to prevent deadly infections.

“Unfortunately, the laboratory tests used in the United States to screen and identify people with SCD are just not feasible in lower resource settings,” Glassberg added. “This new test developed by Kumar and colleagues may someday make newborn screening possible in areas of the world where sickle cell is endemic.”