One scientist says funneling large amounts of money into a single line of research, as in the search for an AIDS vaccine, rewards pet projects and leaves many researchers out in the cold.

In an April 2013 speech, President Barack Obama said the U.S. government must “only fund proposals that promise the biggest bang for taxpayer dollars,” as federal spending cuts have left a dwindling pool of money available for biomedical research.

But there’s no agreement in the scientific community that government grants are actually distributed in the fairest and most effective way.

In December of 2012, Stanford researcher Dr. John Ioaniddis blasted the federal process for funding scientific projects, calling it “totally broken.” published an analysis he performed of peer-reviewed research. He determined that only 40 percent of scientists with highly cited research had won grant funding.

Dr. Otto Yang, a scientist and physician in the department of microbiology, immunology, and molecular genetics at the University of California, Los Angeles (UCLA) AIDS Institute, told Healthline he believes one example of questionable allocation of money is the hundreds of millions of dollars the government has funneled toward research into an AIDS vaccine. He says the money could have been put to better use.

Yang said one research project in particular—the Center for HIV/AIDS Vaccine Immunology and Immunogen Discovery (CHAVI-ID) at Duke University, the Scripps Research Institute, and other locations—has received a huge amount of federal funding for vaccine research, with proportionately little to show for it.

The National Institutes of Health (NIH), the government body in charge of funding medical research, told Healthline it has given CHAVI-ID $426.6 million during its 10 years in existence. It readily defended the science the Center has produced.

“The scientific community is making incremental progress toward an HIV vaccine. This is reflected in the modest vaccine in a large clinical trial and by research that is . It is also reflected by the discovery of powerful to HIV and —knowledge that is informing structured-based HIV vaccine design,” the NIH wrote in a press statement.

From the beginning, the CHAVI-ID program has .

Yang maintains that the government should support a diverse range of research projects, especially since no one yet knows how to design an effective AIDS vaccine—or an AIDS cure, for that matter—and answers could come from any direction.

HIV Vaccine: How Close Are We? »

Yang said all that money devoted to CHAVI-ID could be better spent on smaller, individual research grants known as R01 grants. Investigator-initiated R01 grants offer up to five years of support to build and develop an idea for as much as $1.25 million.

Jeremy Berg is a scientist at the University of Pittsburgh. He said projects such as CHAVI-ID are needed to reach goals as ambitious as an HIV vaccine, arguing that R01 grants would not produce such a dramatic end result. He also said it may take time before large breakthroughs emerge. “But with that said, because you’re spending so much money, you need to make sure [such projects] are being carefully thorough and carefully managed,” he said.

Berg noted that scientific research produced the highly effective antiretroviral medications that exist today, not only making HIV a manageable disease but also greatly lowering the risk of transmission. Pharmaceutical companies also played a large role in funding that research, however.

But Yang is skeptical. According to his figures, CHAVI-ID has received even more money than the NIH estimates. Yang said that nearly half a billion dollars for CHAVI-ID could have funded “the equivalent of 384 of those R01s, supporting 1,920 years of research. Has CHAVI produced that?” 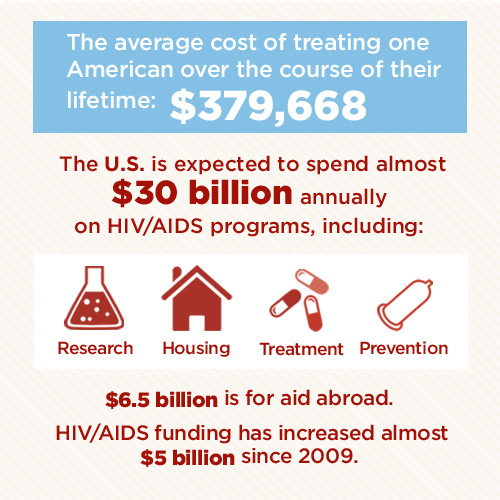 Yang pointed to further waste that comes along with NIH grants: “indirect costs.” Individual institutions negotiate a percentage of indirect costs that get funneled to a laboratory to support the costs associated with the research. Some universities get 50 or even 90 percent more money on top of the research grant.

The money is supposed to pay for things like laboratory maintenance and equipment, but Yang said many universities are using it for anything and everything, with virtually no oversight of how the money is spent.

Berg has written about indirect costs that come along with grants and admits the use of the funds has been controversial. But he added that such money is “not a slush fund.”

NIH funding has taken a dip in recent years due to the economic downturn and budget cuts known as sequestration. This year the NIH requested a $31.3 billion budget but received $29.9 billion instead. This represented a 3.5 percent increase from cuts in 2013 but not enough to make up for the full effects of sequestration, a 5 percent cut. Next year’s NIH budget, which Congress has yet to approve, calls for $30.4 billion.

The shrinking pot of money comes on the coattails of an economy that has already frustrated scientists for more than a decade. A massive expansion of NIH funding during the 1990s was followed by a relatively flat budget for years thereafter. That led to a shortage of funds for multi-year projects that had already been given a green light.

Find Innovative Clinical Trials for HIV in Your Area »

Berg, a former NIH official who oversaw a $2 billion budget as director of the National Institute of General Medical Sciences, told Healthline that the expansion brought more people into the system and led to “a hypercompetitive environment with more applications being submitted and fewer dollars.”

Yang said the root of the problem is a dysfunctional system that tends to amplify, rather than tamp down, existing biases, despite the fact that scientists have a say in how federal grants are distributed through an advisory process called peer review.

Yang, who has published a guide to writing successful NIH grant applications and is an expert on peer review, said there are many different kinds of NIH grants. Some, like those used to fund CHAVI, are known as program grants. These grants are awarded to address a need determined by the NIH, as opposed to ideas proposed by independent investigators.

The NIH says that about 20 percent of its funding goes to projects targeted toward a specific research area or in response to a specific request for a proposal. That amount has remained constant over the past 10 years.

But Dr. Paul Krogstad, an HIV researcher also working at UCLA, told Healthline that a drop in NIH dollars “is keeping people out of research and leading funding to being directed toward an agenda directed by program officers.”

‘Hail-Mary Passes’ or a Conservative Approach?

The NIH told Healthline that the number of grant applications submitted for review has spiked during the past decade, but declined last year. Some scientists have argued that’s an indication that their peers are becoming frustrated and leaving the field.

The percentage of projects that successfully receive NIH funding has declined steadily since 2001, from about 31 percent to 17 percent today. The percentage is even lower in the field of HIV research—some say an estimate of 10 percent is optimistic.

Ioaniddis called the peer review process one that encouraged “conformity, if not mediocrity.”

Yang, Berg, and scientist Bruce Torbett of the Scripps Research Institute all told Healthline that the peer review process works about as well as it could in light of cutbacks in funding.

“What we’re told is that a one (the highest score a grant can be given) should be a grant that’s ‘paradigm changing’…That’s good because that’s where some breakthroughs come. But now that’s being overly emphasized at the expense of people who do the steady, important work that moves a field ahead.”

But Yang argues that the quality of peer reviews has dipped because NIH staff members are overwhelmed with so many grant applications to review.

He also fears that funding is being directed toward so-called ‘Hail-Mary passes,’ instead of measured research. “What we’re told is that a one (the highest score a grant can be given) should be a grant that’s ‘paradigm changing,’” Yang said. “In other words, completely new and different. That’s good because that’s where some breakthroughs come. But now that’s being overly emphasized at the expense of people who do the steady, important work that moves a field ahead.”

Berg sees it differently, fearing that the current environment could end up favoring more conservative research with a better chance of a payoff in terms of funding and real-world applications.

Berg and Yang agree that the NIH needs to invest in both types of research, just as a Wall Street investor would choose a stock portfolio based partly on stability and partly on risk.

Unlike Wall Street, however, the scientists say the government should be transparent about the grant approval process and should take an unbiased look at the many innovative research projects still waiting in the wings.