CDC: Now Is the Time for Everyone to Get a Flu Shot

Last flu season about 46 percent, or half of all Americans six months and older, were vaccinated against influenza, but only 34 percent of healthy 18- to 64-year-olds got the flu shot.

The National Foundation for Infectious Diseases (NFID) and the Centers for Disease Control (CDC) held a press conference today along with several medical experts to encourage Americans to get vaccinated against the seasonal flu.

Dr. Thomas Frieden, director of the CDC, told the press, “There’s one thing to know about flu; it’s unpredictable and the best thing you can do to protect yourself, your patients, and your family is to get a flu vaccination this year and every year. It is safe and effective. We recommend everyone six months and over get a flu shot this year.”

Frieden went on to say that while it’s difficult to predict whether the coming flu season will be severe or not, or exactly which strains of flu will be circulating, “We can predict that the best way you can protect yourself is to get a flu vaccination, and now is the time to get one.”

The reported a surge in flu vaccination coverage among healthcare providers, based on data collected from more than 4,000 hospitals.

“Overall, 82 percent of healthcare providers working in these hospitals were reported to get a flu vaccination. The highest report was among hospital employees (86 percent) … Immunization rates are still lagging in nursing homes, long-term care facilities, among allied health workers, and people who work at various levels of the hospital. There’s more to be done there,” said Frieden.

Learn What Happens When the Flu Turns Deadly »

Last year, Frieden said the flu hit young adults and middle-aged adults harder than it usually does. “They accounted for a larger proportion of cases. Last year it was predominately the H1N1 strain, which first emerged in 2009. That strain remains in this year’s flu shot, and you need this year’s flu vaccination to protect you against this year’s flu.”

Frieden said that the CDC is particularly concerned about the low rate of flu vaccination among adults with high-risk conditions, including asthma, lung disease, and heart disease. “They’re at high risk of hospitalization or dying from flu. Their [vaccination] rate is only 46 percent … Typically, most of the hospitalizations and deaths are in this population.”

Dr. William Schaffner, past president of the NFID and a professor of preventive medicine and infectious diseases at the Vanderbilt University School of Medicine, was at the conference, and spoke to Healthline about the flu season.

Find Out: Are Flu Shots Safe for MS Patients? »

Some people are concerned that they can get the flu from having a flu shot, or that they will get sick after getting the shot. Schaffner said, “You can’t get the flu from the immunization. That’s a myth. Scientific studies have shown that many times it was just a coincidence that the person was developing a respiratory infection … We can tell them with great assurance, other than a sore arm, and about 1 percent of people who get one degree of fever, anything beyond that was not the vaccine.”

Schaffner said it is also a myth that the vaccine doesn’t work or doesn’t work very well. “We know the vaccine is not a prefect vaccine. But it is a good vaccine, and it prevents many infections and the complications of those infections. Researchers are working day and night to make a better flu vaccine. We can do a lot of good with our pretty darn good vaccine, while our researchers work to make a better one.”

Should a person who suspects they have a cold postpone getting the flu shot? Schaffner said, “What’s recommended by the Advisory Committee on Immunization Practices, is that if you have a mild ailment you can go ahead and get the vaccine. If you are more sick, and have a temperature of 101 degrees, it is better to put it off. If you have a mild cold, that won’t harm you and you want to go ahead and get the vaccine.” 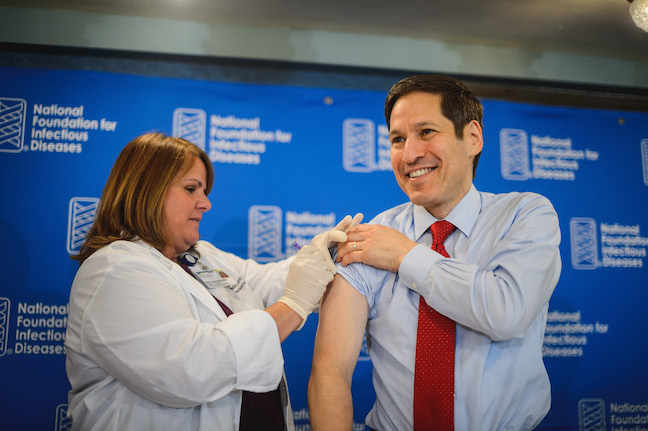 Some people complain that after they get the flu shot their arm is sore. Schaffner explained, “The needle puts the vaccine directly into the muscle, and the vaccine is designed to stimulate the immune response … The vaccine is doing its job and it causes a transient irritation. To alleviate pain, a little Tylenol works. Ice is not necessary.”

Healthline asked if there is any time limit on when a person gets the vaccine. Schaffner said, “I don’t want anyone to procrastinate. On average, flu peaks in the United States in February, so clearly if you put it off and you are past Thanksgiving or Christmas, it’s still a good idea to get the vaccination. It takes ten days to two weeks for your body to build up the protection.”

Finally, Schaffner said some people don’t want to get the shot because they say they never get the flu. “They forget that they can give the flu to others, such as older people and those with diabetes,” he said. “Some people don’t like needles. If you are between age two and 50 and otherwise healthy you can get the nasal spray vaccine.”

Last year, more kids got vaccinated than ever before. Frieden said the estimated coverage was 59 percent among kids. Asian, Hispanic, American Indian, and Alaskan Native kids had higher vaccination rates than African American or white children (who had rates higher than 55 percent).

However, last year there were more than 100 documented deaths of children from influenza, and more than half of those deaths were in children who didn’t have a preexisting condition. About 90 percent of these children didn’t get a flu shot.

Frieden said, “There has been a lot of understandable media attention to clusters of enterovirus 68. We’ve seen this virus before. It peaks in the fall. We may well see more cases. Many of the kids with the most severe illness were kids with asthma. So making sure that asthma is well controlled and every kid with asthma gets a flu shot is more important than ever this year.”

Dr. Paul A. Offit, chief of the Division of Infectious Diseases and director of the Vaccine Education Center at the Children’s Hospital of Philadelphia, told the media, “Not a year goes by when a child doesn’t die at the Children’s Hospital of Philadelphia from a vaccine-preventable disease. Mostly it’s flu. When the 2009 pandemic hit, we had five children die of influenza.”

Offit told the story about his friend’s 8-year-old child who came into the ER with the flu and died after eight days. “To watch these parents lose their future is hard. The parents’ reaction is they can’t believe this happened to them … There is nothing trivial about flu. I’ve been asked by reporters about enterovirus and Ebola, which hasn’t caused any deaths in the United States, and yet flu causes thousands of deaths.”

Pregnant Women Are At High Risk

Most pregnant women are now getting a flu shot, but their vaccination rate is still just 52 percent.

Dr. Laura E. Riley, an associate professor of obstetrics, gynecology, and reproductive medicine at Harvard Medical School and director of obstetrics and gynecology infectious disease at Massachusetts General Hospital, told the press, “No otherwise healthy pregnant woman should ever have to go to an intensive care unit gasping for air and trying desperately to save her newborn from delivery prematurely. During pregnancy and in the immediate postpartum period, influenza can lead to severe respiratory infection and even death. When mothers become this acutely ill, they are at risk for delivering their babies way too early.

“The best prevention for the flu is the flu shot,” Riley added. “An overwhelming number of studies have shown that the flu shot is safe in pregnancy during all trimesters. There is no increased risk of birth defects, miscarriage, or preterm delivery from the vaccine itself. The vaccine benefits the mother because it prevents severe illness for her, and it protects the baby from infection in the first six months of life before the baby can be vaccinated. My strongest recommendation is, don’t delay, get your flu shot.”

The CDC also issued a new recommendation for a second form of pneumococcal vaccine, called the conjugate vaccine, which has been proven effective in kids. “We’ve seen the number of pneumococcal cases plummet in recent years. The Advisory Committee on Immunization Practices now recommends people 65 and older get this newer vaccine,” said Frieden.

Shaffner added,”Getting influenza also increases a person’s risk of getting pneumococcal disease. For those 65 and older, the CDC now recommends two vaccines against pneumococcal disease: the conjugate vaccine (PCV13) already recommended for universal use in children, is now recommended for adults age 65 and older; that along with well-known polysaccharide vaccine (PPV23), which has been used for many years in the age 65 population.”

Frieden said that the CDC is preferentially recommending nasal spray vaccine when it is available immediately for healthy children two to eight years old who don’t have any contraindications.

“If it is not available immediately, get any form of flu vaccination,” he said. “We recommend that you stay home if sick, stay away from other people if sick, wash hands often, and cover coughs and colds. If you have symptoms of flu, particularly if you have an underlying condition and your doctor prescribes anti-viral medicines, take them. They’re a good second-line defense against flu.”

Learn Where to Get Free or Cheap Flu Shots »

Photos courtesy of the National Foundation for Infectious Diseases.