If you have diabetes, you probably want to get advice from other diabetics. Maybe you need a medical supply that you forgot to take with you on vacation. Now there’s a new mobile safety app, dubbed HelpAround, that lets diabetic patients and their families connect with one other.

When 34-year-old Annie Hemmesch was two months pregnant with her second child, she found out that her health insurance provider no longer covered continuous glucose monitors and sensors. Hemmesch, who has had Type 1 diabetes since she was 19 years old, asked other diabetics she knew if they had any extra sensors, but to no avail.

Then she sent out a message on HelpAround, a new mobile app that provides a “mobile safety net” to people with diabetes and their families. Within a week, Hemmesch, who lives in Chicago, received the sensors she needed, at no cost, from two strangers living in two separate states. The supplies she received carried her through to the end of her pregnancy.

Speaking to Healthline from Israel, Yishai Knobel, CEO and co-founder, said that HelpAround uses patent pending technology to continuously update a personalized set of nearby, potential diabetes helpers, and is a free downloadable app from iTunes and Google Play. The app is available in Spanish, French, English, and Hebrew. 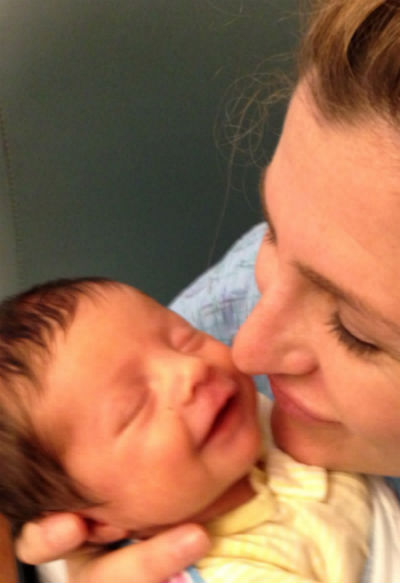 Photo of Annie and her baby, courtesy of Annie Hemmesch.

Getting Help to Those Who Need It

“As a pregnant diabetic, your blood sugars are so unstable. The health and success of my pregnancy was honestly attributed to these sensors. You read these horror stories of pregnant diabetic moms who don’t know where their blood sugar level is at and something bad happens to the mom or the baby. It is very common. I was desperate to find sensors. I could only get my hands on one or two at a time, and that was not enough to cover me for the duration of my entire pregnancy,” said Hemmesch.

After learning about HelpAround, which was in the beta testing phase, she logged on, created an account, and typed in, ‘I am a Type 1 diabetic, pregnant, need a sensor, does anyone have any extra sensors they can donate?’

“One woman, whose daughter had switched to a different brand, said she no longer needs them. Another woman, who was my age, said, ‘I never use them, here you go.’ They both donated the sensors to me. I knew I would do that for a person because we’ve all been in that situation. If you are sick, you get it; you know the need for it,” said Hemmesch, who was shocked by “the love of humanity” and that the women weren’t asking for something in exchange.

Read More: Diabetes Patients May Be Distressed, Not Depressed »

“The sensors cost about 10 dollars and they last three to five days, which would be pretty pricey. I had enough for the whole pregnancy, thanks to these two women. HelpAround is amazing. Everyone can see the message and they see where you are from. You can say Chicago and you can populate it to show people nearby, and you can see who needs help in your area,” said Hemmesch.

So, is there really a difference between HelpAround and the numerous social communities for diabetes patients, such as ones on Facebook and Twitter? “Thank god I came across this site, because the Internet, Facebook groups, and even groups for only diabetics, are just too big. Sometimes people read those; sometime they don’t. They aren’t a niche market like HelpAround. I’m a diabetic; I need help. That’s all you are going to find here. It was incredible. It makes you feel good knowing there is something out there for other people,” said Hemmesch.

Hemmesch recalled that ten years ago she had extra insulin pump supplies. “The pump supplies are terribly expensive … People don’t know about a donation platform. When I found out about HelpAround, I was so relieved knowing that whatever I donate will end up in the right hands.”

Learn About Diabetes Risk in Latinos »

A Friend with Diabetes Inspires HelpAround

How did Knobel come up with the idea for HelpAround? He explained that a friend who had Type 1 diabetes forgot his test strips at a sports stadium. “Does he jump back in the car and drive an hour home or go and start looking for a pharmacy in the area? What if he could search the stadium for other people with diabetes? There are 20,000 people in the stadium and 10 percent have diabetes; the only question is, how do you find them?” Knobel said.

Now, six months after beta testing, finding more and more people with diabetes appears to be a no-brainer for HelpAround. “We’ve had good beta usage in the past six months, and now we are going to what we call public data. On the app, you see a circle of faces of people who are nearby who are potential helpers. These are strangers, but they have designated themselves as helpers. If you are Type 1 and you added Type 1 to your safety net, you’ll see Type 1 helpers. The same thing applies for Type 2. If you have parents or children with diabetes, you have different populations that fit your specific profile. When you post a help request to the community, you choose who to ask. And you can ask for someone far away or nearby in my community,” said Knobel.

Stand by Me — And My Doctor

Mike Hoskins, age 35, who was diagnosed with Type 1 diabetes when he was five years old, is the managing editor of Diabetes Mine, an online diabetes newspaper. He echoed Hemmesch’s sentiments about HelpAround’s ability to help people with diabetes.

Hoskins, who is very familiar with social media sites for diabetics, said, “I can’t say I have heard of anything like this. It goes one step beyond blogosphere, Twitter, and many forums. There really hasn’t been an app like this. I knew a woman who lives in Israel who was traveling in the U.S. She ran out of supplies and she turned to HelpAround and found someone locally to help her.”

After a couple of months using the HelpAround app, Hoskins received a more serious call for help from a woman living in central Indiana, who said she was having dangerously high blood sugar levels. “It was a pretty vague message, but I saw this person was relatively in the same area. I reached out, ‘my name is mike, long time Type 1, what do you need help with?'”

After learning that the person didn’t have an endocrinologist, Hoskins put her in touch with his endocrinologist in Indianapolis by email. “She never went to see him, but I kept in touch with her and she is doing okay now,” said Hoskins, who cautioned that although patients may want to help others, they should not give medical advice, but rather encourage these patents to seek medical help.

Feeling the Love Online and on the Phone

While Knobel did not wish to disclose numbers, he said that in the early stages of HelpAround’s launch, 85 percent of help requests received a response. “The same people are there to help other people and to ask for help. This is part of the dynamic of the safety net. I’m there for you; you’re there for me because we all struggle with the same condition,” he said.

Through a partnership with TeamHealth, HelpAround is also offering 24/7 live phone support with registered nurses from its mobile app. Users will be able to ask diabetes-related questions for free up to three times a month.

HelpAround has also developed a web-based Safety Net widget for EsTuDiabetes.org, which is one of the largest Spanish-speaking diabetes patient community websites. “They are an online desktop space community with hundreds and thousands of users in Spanish. There is now a group of EsTuDiabetes on HelpAround. There is a big online community of parents, and they have a designated group in HelpAround where they can help each other beyond just the online website,” said Knobel.

Knobel went on to say that since launching HelpAround, he has found that people with diabetes have a high level of camaraderie. “They are looking to help other people because they understand what they are going through,” he said. “This is also a patient engagement platform designed to let healthcare providers, brands, and retailers join the patient conversations. Any enrollment by retailers and brands will be in a way that adds value to the patient.”

Part of a Community

One of the greatest benefits of HelpAround is helping diabetes patients feel they are not alone.

Hemmesch said she is addicted to HelpAround because it makes her feel normal. “Sometimes normal people don’t understand what we are really going through. A lot of times people ask not just for help with durable medical goods, but they say, ‘I’m running a 5k on Friday, I’m afraid my blood sugar is low. I’m really stressed out; my blood sugar is going crazy, has anyone been through this before?’ People can offer their experience and advice. It’s like a support group,” said Hemmesch.

Hoskins agreed. “Whether you are living with diabetes for a month, or a few years, or 30 or even 75 years, we all basically want to know there are other people like us out there, and that what we’re experiencing, and the questions we have, that there are other people feeling or asking the same types of things,” he said.