Consumers Like Wearable Technology but Worry About Data Security

Nearly half of people who use fitness devices or health-related mobile apps are worried their data could be stolen, a Healthline survey reveals.

In 2014, there were an estimated 21 million wearable tech units sold worldwide. That’s expected to grow to 150 million units in 2019.

While consumers appear to be in love with wearable technology, many who now use health-related devices are concerned about the security of their data on them.

A survey conducted by Healthline in mid-June revealed that more than 45 percent of wearable and mobile app users are worried that hackers may try to steal their personal health information.

About 25 percent were concerned about data on a Fitbit or a health-tracking app. About 10 percent expressed concerns over security on their Apple Watch. 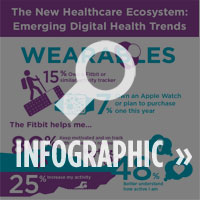 Of the 15 percent of consumers that own a Fitbit or similar activity tracker, more than 80 percent of them say the device keeps them motivated to stick to their exercise routine.

Only about 7 percent of survey respondents said they own an Apple Watch. Of those, more than 41 percent said they bought the device for health or fitness reasons.

Get the Facts: Which Wearable Tech Device Is Right for You? »

Checking in with Apps

More than half of the 3,679 Healthline readers who responded to the survey said they use at least one mobile health app. Almost 50 percent of participants said they use as many as four apps with two apps being the average.

Users indicated that they wanted to see more medical and fitness apps. Results showed that users wanted more blood pressure trackers/logs (74 percent). Next was food logs and calorie counters at 63 percent. Then came medication reminders at 62 percent and blood sugar trackers at 57 percent.

About a third of survey participants have been using their app for three to eight months. Another third had been using the devices for less than three months.

However, 43 percent said they have stopped using a health or fitness app within six months of starting it. Nearly 30 percent of them said they quit because they weren’t making enough progress.

“Healthline.com’s survey findings demonstrate a strong interest among consumers and care providers in the advancement of wearables and mobile apps,” said Dean Stephens, CEO of Healthline.

“However, there is lingering and noticeable concern around the protection of personal health information. This should be a warning bell for manufacturers to ensure that the security of this new technology is a top priority.”

Where They Go for Medical Treatment

More than 71 percent of those surveyed said they still seek medical treatment at their doctor’s office while 20 percent said they have sought care at an urgent care clinic. More than 13 percent have used a retail health clinic such as CVS Minute Clinic.

Another 9 percent used a telehealth service for a minor illness. About 90 percent of them said the experience was the same or better than a doctor’s office consultation.

The Healthline survey was conducted from June 17 to June 24. It has an error margin of plus-or-minus 5 percent.