Patients who test positive for Hepatitis C have a new test available called the Abbott RealTime HCV Genotype II test, which identifies the specific strain of the virus, enabling physicians to tailor treatments to patients.

July 28 is World Hepatitis Day, and Healthline sat down with Dr. Robert Bilkovski, senior associate medical director for medical affairs at Abbott, to discuss how the Abbott RealTime HCV Genotype II test, which was approved by the Food and Drug Administration in June 2013, can help doctors improve Hepatitis C patients’ treatments

Bilkovski told Healthline that Hepatitis C is “a silent epidemic” that kills more people each year in the U.S. than HIV, causing about 350,000 deaths a year. “Most people do not know they have the disease, so it’s important to know if you have risk factors.”

The biggest risk factor that Bilkovski identified is among the baby boomer population, mainly because of their high illicit drug usage and sexual practices during the 1980s. “If you are a baby boomer, you should talk to your doctor and get screened for Hepatitis C. If you get screened by lab tests, and you’re identified to have Hepatitis C, The Abbott RealTime HCV Genotype II Test is the next step as part of that evaluation,” said Bilkovski.

There are six different strains of Hepatitis C, known as genotypes. In the U.S., 75 percent of all HCV infections are genotype 1; genotypes 2, 3, and 4 are less common in the U.S., and other genotypes are rare. It is possible to be infected with more than one HCV genotype; this is most likely among injection drug users, and people who received contaminated blood products before 1987 (when viral inactivation started) or a blood transfusion before 1993 (when effective screening procedures were instituted).

“Knowing the genotype from the assay gives the doctor the ability to provide more personalized treatment to be able to provide the best probability of treatment success,” said Bilkovski.

The Abbott RealTime HCV Genotype II Test is a simple blood draw test. “The test is able to look at very selected parts of the genetic makeup of the virus, called nucleotides. By looking at that pattern we have the ability to see whether or not that specific nucleotide pattern, almost like a fingerprint, is for genotype 1, 2, or 3. By being be able to do that at the molecular basis, we will be able to provide doctors with the type of genotype that patient has if they are infected with Hepatitis C,” said Bilkovski. 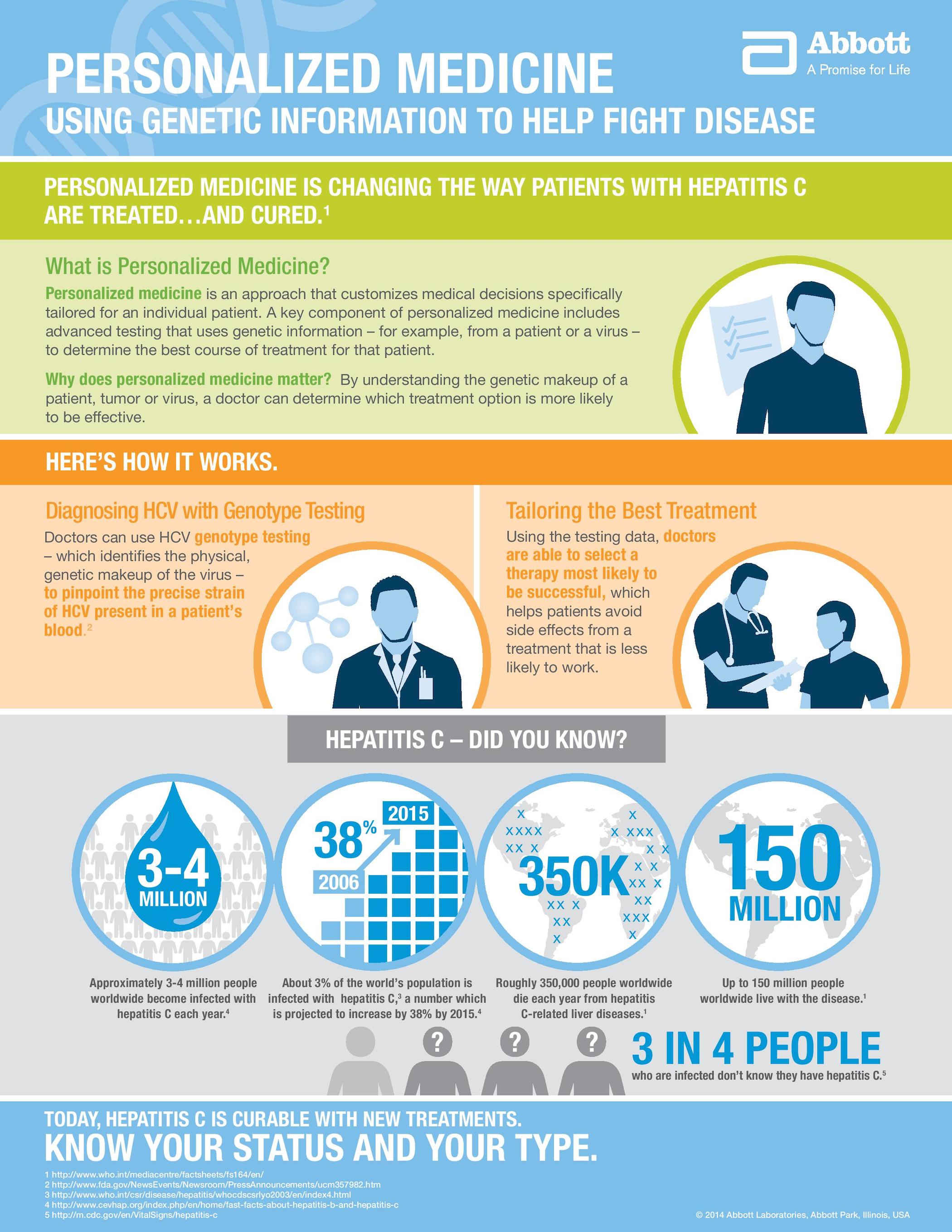 Bilkovski added, “Once you know the genotype, the doctor puts that information together and prescribes the most effective and tolerable treatment regimen personalized for the patient, based on their infection, to get the best probability of cure.”

Working as an ER physician in the inner cities of Detroit, Bilkovski had needle stick exposure. “While performing an invasive procedure, a blood contaminated needle went into my hand. I had to be monitored and prophylaxed for HIV and Hepatitis C. Fortunately, with testing, I was able to identify I did not get exposure. Just because you have risk for exposure, doesn’t mean the virus will actually go into your bloodstream. Hepatitis C does have the risk for blood borne transmissions, but it not as strong a risk as with HIV. It’s still there, but not as strong of a risk for transmission.”

Bilkovski concluded, “Up to 80 percent of individuals, when they get exposed to Hepatitis C, don’t even know they got infected. Over time, Hepatitis C, when it becomes chronic, will result in scarring of the liver. Slowly over time, after you get infected with Hepatitis C, that liver is scarring down to the point that it goes to cirrhosis, which is liver failure. The risk is that at least one to two percent of patients who have cirrhosis will go on to develop a form of liver cancer that is also fatal. The most important thing is to be able to identify if you have it; you need to go and get tested.”

A Patient’s Triumph Over Hepatitis C

Connie Welch knows the angst of being diagnosed with Hepatitis C, and she also knows what it is like to triumph over the disease.

Welch told Healthline, “I contacted Hep C in an unusual way. In 1992 I had foot surgery, and two years later I was contacted and told that a convicted drug felon, who worked at the center at the time as a scrub tech, would take a vial of medicine and shoot up with the syringe with the patient’s IV bag, put normal saline back into that same syringe and put it back on the tray. ”

Welch, who has two children, was in complete shock to learn this news. “It was horrific. It was very scary learning about Hep C and that there was not a cure. The doctor sat me and my husband down for an hour and a half and explained everything about Hep C.”

After being tested three times, Welch learned that her Hepatitis C was active and doing damage. She has had two liver biopsies and three treatments in a course of 20 years. “I was tested for my genotype and I’m genotype 1.”

Following a three-drug combination treatment, which included the drug Incivek for the first four weeks of the treatment, Welch went nondetected. The treatment lasted 24 weeks. “I am now two years post treatment and I’m still nondetected. I just received a new diagnosis and they said I am Hep C resolved, which means cured.” In 2012, I did my last treatment. I was able to receive a cure. That was pretty phenomenal,” said Welch.

In 2012, Welch created a website at www.lifebeyondhepatitisc.com, which offers resources and support to patients and their families. “I had no idea what was going to be the final outcome with my treatment, because I had two other prior treatments that had failed. It was a journey for me, too. We are all in this together, and I want to reach out to other Hep C patients to tell them there’s hope, hope for developments in treatments, and that there’s so much more that can be done to help liver patients now than 20 years ago.”

Welch concluded, “Being two years post treatment, I don’t consider my Hep C journey over, because there are other patients going through it. My personal victory is not complete until Hep C is totally eliminated. There are a lot of patients and their families who are scared. You have to encourage them and show them some of the differences between the new and old treatments. Treatment today is 12 weeks versus 48 weeks. That is phenomenal.”