Cancer centers and hospitals nationwide are beginning to offer a breast imaging technique called tomosynthesis, also known as 3D mammography, and patients and doctors are reporting a myriad of reasons to get excited about this new screening tool.

Fast. Easy. No pressure. These are just some of the words Eileen Curd used to describe her experience having a 3D mammogram recently at Moffitt Screening and Prevention clinic in Tampa, FL.

Healthline sat down with Curd to find out what patients can expect. We also talked to Dr. Bhavika Patel, a radiologist at Moffitt Screening and Prevention, to learn about the benefits of 3D mammography.

Pointing out that she and a friend go together for their mammograms every year (if one of them forgets, they “nag” each other), Curd said, “The 3D mammogram was great. It was much faster than the regular mammograms I have had in the past. I felt less pressure. The radiologist read it right away and said he could see right through the density of my breast.”

Curd has experienced a cancer scare in the past. When she heard that Moffitt had installed a 3D tomosynthesis machine, she said, “I knew if they are trying something it would be state-of-the-art. A mammogram has never been extremely painful for me, but I did find this exam even easier. They do two pictures per side. You hold your breath for ten seconds. It’s very fast. The doctors say the image is clearer.”

Curd, who has been involved with the the Moffitt Cancer Center foundation for 19 years, said that a 53-year-old woman, who had a “clean” mammogram a year ago, was diagnosed with breast cancer two weeks ago. “This mammogram showed cancer. If she had waited two years, I don’t think the outcome would have been very good,” she said. “It’s so worthwhile to get a mammogram every year. It definitely saves your life.”

Will More Women Get Screened?

Curd is not alone in her excitement. Patel told Heathline, “Our screening volume has tripled ever since this has taken off. There are 30 people on the list for screening mammograms today. Typically, it’s a lot less than that,” she said.

The new breast imaging technique is getting a lot of publicity, Patel said, and “it makes people want to come out and get the mammogram done, especially because we are doing the tomosynthesis and it is new for us. When something new hits the market, and there are good study reviews, it motivates people to give it a second go, if they weren’t doing it before, or it reminds them to come in and get screened.”

Patel envisions 3D mammography eventually replacing standard mammograms. “It allows us to look at the breast in-depth. People use the analogy, when comparing this with a standard mammogram, of looking at a book. You have the covers and then you have your actual pages. With tomography, you are able to actually scroll through the pages and see each and every aspect of the breast. A lot of times we would see asymmetries or something we thought was an actual mass, but when you come back and look at it in real time on diagnostic imaging, it ends up just being superimposed tissue. But with tomography we are able to actually see that this is just tissue superimposed on one another and it’s not an actual finding, so it is going to decrease our recall rate. Studies have shown that tomography decreases recall rates by 15 percent. 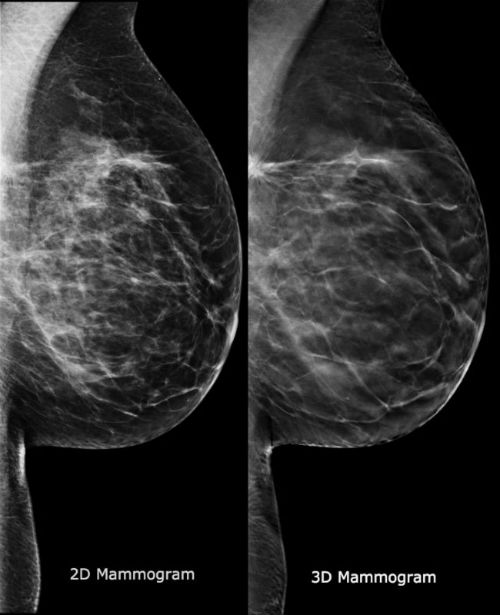 “If doctors see something that looks suspicious after an initial screening mammogram, patients get called back for additional images or an ultrasound. If something does look suspicious, they come back to take a biopsy,” explained Patel.

“From the patients’ perspectives, it helps them not have to come back and it reduces their anxiety. From the doctors’ perspectives, it gives us more peace of mind knowing we’re looking at the breast as best we possibly can at this point,” said Patel, adding, “There are also fewer biopsies.”

Getting More (and Better) Images

3D mammography uses the same compression technique as a regular mammogram, but allows doctors to see a much more nuanced image. “The imaging device makes a circular arc over the breast so you are able to get different angled degrees of the breast,” Patel said. “You only get four images when you do a standard mammogram, and that’s why it doesn’t take as long for us to read.”

Noting that the new tests take radiologists about twice as long to read as a standard mammogram, Patel said as radiologists get more acclimated to using it, that may change. “You do have a lot more images to look at,” she said. “With this, we are getting anywhere from 30 to 60 images that we are actually scrolling through, so you get a lot more images and a lot more information in real time, but it takes exactly the same amount of time for the patient.”

Patel said Moffitt has two tomosynthesis machines, and in the few weeks since they began using the new technique, doctors are very pleased. “We love it. I absolutely love it. I prefer it to a standard mammogram. Initially, there was a little bit of anxiety because it’s a new modality. There’s always a learning curve when you start something new, but ultimately, once we started using it, we see how much better it is and how much more it lets us look at the breast without getting confused by superimposition of tissues.”

Reducing False Positives Is a Perk

“The problem with a lot of screening tests, in order to increase our sensitivity, meaning detect more cancers, we typically end up decreasing our specificity, and we end up finding a lot of stuff that isn’t cancer,” Patel said. “The perk of [tomosynthesis] is that it is the first modality that has come out in a while that lets you increase your detection rate, but not necessarily increase your false positive rate.”

So, if you offer 3D mammograms, will women come? Patel says it depends on whether patients aren’t coming in for screenings because of concerns over radiation versus anxiety. “There’s been a lot of negative publicity for breast imaging as far as having high recall rates and false positives. Once people start seeing this is helping to do away with some of that, it potentially could bring more women to get screened,” said Patel, adding, “Insurance companies are expected to start covering 3D mammograms in January.”

Perhaps Patel summed up her enthusiasm and outlook for 3D imaging best when she said, “It’s very exciting. We have residents and fellows who come through and it’s fun teaching them. There will be a day where they won’t know how to read mammograms or know what a mammogram is, because I think this is going to be the new thing of the future.”