Anyone going on a brand spanking new insulin pump is probably filled with anticipation and excitement, but there’s always a little bit of trepidation when it comes to a new piece of medical technology. Will it meet my needs? Will I like using it? Most importantly: will it work? The fear of potential problems like motor error, malfunctioning buttons, and occlusions can throw a wrench in anyone’s pumping anticipation.

Apparently, those wrenches have been flying around the Diabetes Community quite a bit lately, especially last summer when the newest insulin pump hit the market.

We have discovered dozens of new Tandem t:slim users who’ve taken to the Internet, reporting on blogs and social networks that their pumping honeymoon swiftly came to an end with the onslaught of occlusions using Sanofi’s Apidra insulin. Naturally we wondered what could be the cause, whether or not this was strictly a t:slim issue, and whether or not there is anything anyone can do about it.

Occlusions are basically just blockages that prevent insulin from being delivered. If you have a blockage, pressure will build and usually your insulin pump with alarm, letting you know something has run afoul.

“There are several reasons why they happen, ” says Dr. Brian Levy, an endocrinologist and Senior Director of Clinical Affairs at Animas. “They include kinking of tubing that goes from the pump to the insertion side, or more importantly, the kinking of the catheter. Most cannulas are made of Teflon or plastic which can kink. It can also be due to problems at the insertion site, inflammation that can happen around the insertion catheter or the presence of scar tissue. If a patient uses the same place on their abdomen, there can be chronic build-up of scar tissue.”

Occlusions can and do happen in all insulin pumps, whether tubed or patch pumps, and they have happened with all three types of fast-acting insulin on the market.

But a 2008 research study published in the Journal of Diabetes Science and Technology showed Apidra had the highest probability of occlusions in pumps over five days (despite the FDA’s recommended site changes every 2-3 days). That was comparing Apidra to both Humalog and Novolog, although the probability of an “early occlusion” occurring during the first 72 hours was actually highest in Novolog.

In of insulin pump sets, published in that same journal, researchers found that during the 48-72 hour mark occlusions occurred independently of the insulin used. However, that study only involved in 12 patients and the authors even note that occlusions are rare.

The issue at hand is that after Tandem released the t:slim last summer, some new users started noticing something curious. Occlusions started occurring. A common theme: all the patients used Apidra.

Melissa Lee, a type 1 PWD in Texas, said that she started noticing the problem early on. “As early as my second cartridge,” she says.

Another longtime type 1, Bernard Farrell in Massachusetts, who’s one of our resident tech gurus in the Diabetes Online Community, jumped on the t:slim boat early on and discovered the exact same problem. Both he and Melissa have since switched insulin brands, both to Humalog.

We also heard from D-Mom Jodee Martin, whose 13-year-old son recently went on the t:slim. After speaking with Tandem, she speculates that, “Apidra may not be compatible with the pump. The makers of Apidra suggest that Apidra be changed every two days in this pump, so that may be the problem but our whole reason for getting a pump with a 3ml cartridge was so that we could change every third day.”

We contacted Tandem to see if they had any ideas what was going on. Steve Sabicer, the company’s PR rep, says they’re looking into the issue, but are aware that Apidra is only indicated for 48-hour use in any insulin pump (!), based on that 2008 study showing Apidra had a higher occlusion rate in pumps over several days.

Due to this and what they saw as the limited number of users on Apidra, Tandem did not include Apidra in their clinical trials — but focused instead on the two most prescribed fast-acting insulin on the market, Humalog and Novolog, in its FDA submission.

What?! Apidra isn’t “indicated” for use more than 48 hours in any insulin pump? When pumps are clearly meant to last at least 3 days?

“Our Phase 3 pump submission for Apidra was 48 hours, therefore we are indicated for 48 hours,” she said. “When used as directed, Apidra has shown a low rate of pump clogs and infusion-site reactions.”

The reason? Back when Apidra was approved in 2004, it was standard for insulin to be approved for just 48 hours. Crazy, huh? It wasn’t until several years later — 2009 for Novolog and 2011 for Humalog — that the regulations were increased to three days for insulin in a cannula, and seven days for insulin in the pump reservoir (presumably because insulin degrades with heat exposure, and the body is quite warm).

We wondered why this fact is so under-publicized, leaving patients to learn about this limitation the hard way?!

Furthermore, Sanofi has no plans to seek approval for a 72-hour use of Apidra, Brooks says, so that means we won’t get any official answers about what happens to Apidra after three days.

It doesn’t seem that Sanofi has really stepped up to make this limitation clear to patients, but what about the pump companies? You’d think they’d at least want to warn patients of this possible fail in advance.

We contacted Animas, Medtronic and Insulet to find out if they’d experienced any recurring issues with Apidra insulin, or were alerting patients to potential problems. None of them would comment other than a canned statement that “when used as directed,” there should be minimal issues with occlusions no matter what insulin is used.

Sean Gallagher, senior director of marketing at Insulet Corp., did clear up one thing: he says the pump companies “are not required from a regulatory standpoint… to test with different insulins for performance.” Right — so if it’s not required, why would any company invest in this?

On the flipside, the insulin companies aren’t required to test their products in every pump on the market either. It turns out the only pumps that Apidra was studied in during their FDA clinical trials aren’t even made anymore — the Disetronic H-Tron plus V100 and D-Tron with Disetronic catheters (Rapid, Rapid C, Rapid D and Tender) and the Minimed Models 506, 507, 507c and 508 with MiniMed catheters (Sof-set Ultimate QE, and Quick-set). Medtronic doesn’t even produce those models anymore, and of course, Disetronic was acquired by Roche and has now morphed into the Accu-Chek Spirit.

Basically, occlusions happen in every insulin pump and with every kind of insulin, and there are plenty of patients who have managed to use Apidra in their t:slim without an issue — but we find it interesting that the only pump company to publish an official statement about using a particular insulin is Tandem regarding Apidra:

“The t:slim Pump is indicated for use with Novolog and Humalog, but we have no reason to believe that there is anything in the t:slim’s pumping mechanism that could contribute to a higher incidence of occlusions using Apidra.  There are distinct labeling differences between rapid-acting insulins and their use in pumps, particularly as it relates to how frequently the reservoir should be changed.  These are things you should discuss with your physician as part of your decision process.”

Some folks wonder if there’s something about the t:slim in particular that doesn’t host Apidra well. One theory, posed by Manny Jimenez, the Tandem customer service rep that Melissa spoke to, is that there is no information about how Apidra responds to the pressure of the t:slim’s unique microdelivery chamber, which is an interior bag that is pressurized versus the traditional plastic cartridges that hold insulin.

No one has vetted this theory, and they probably won’t any time soon. I guess this means we’re back to being guinea pigs…

On her blog Sweetly Voiced, Melissa shared that when she used Apidra in her t:slim, the majority of occlusions happened after 48 hours, but she is not having any occlusion issues at all now on Humalog going for the full three days of usage. That’s the same finding Bernard came up with, when changing his insulin routine.

Dr. Levy, who also practices as an endocrinologist in addition to his work at Animas, says he hasn’t seen any issues with his patients using Apidra in their insulin pumps, but he notes that “the longer one wears an insulin pump without changing the catheter, the more likely an occlusion will occur.”

On that note, Insulet’s Gallagher shared this slide showing how your BG creeps up the longer you keep your pump on: 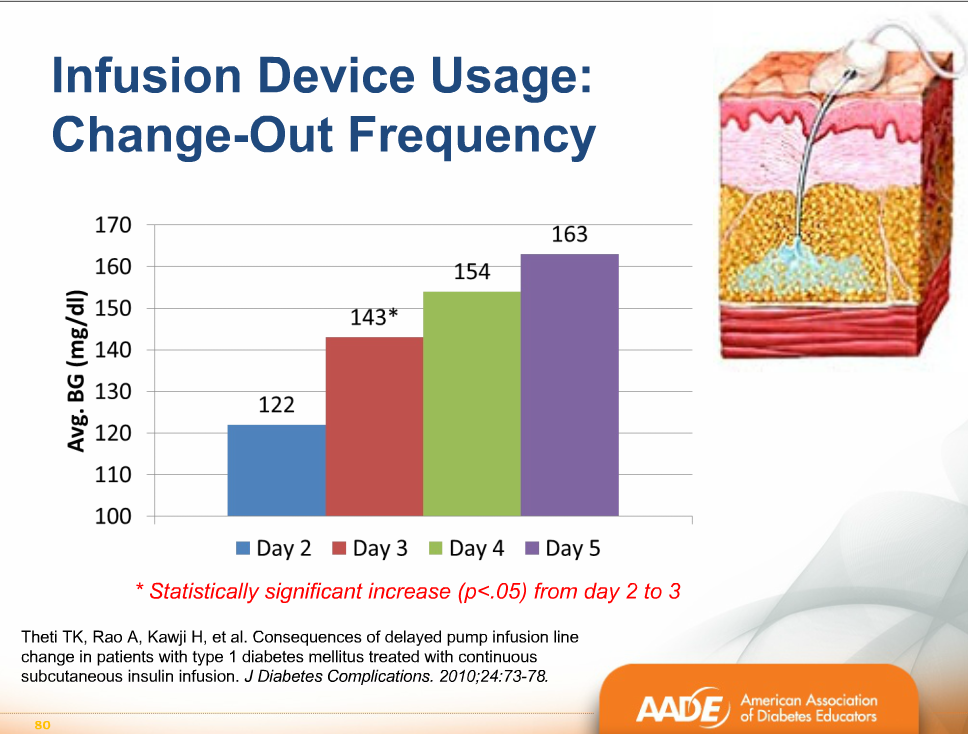 “This is exactly why instructions for use to change their insertion site every 72 hours,” Dr. Levy says. “And we know that many patients do not, for many reasons. It could be cost, or it’s a pain to change the insertion site, or forgetfulness. So that’s probably the most common reason why there is an insertion site issue.”

When it comes down to making a decision on what to do, we PWDs just need to carefully consider our priority preferences for pump models and type of insulin — and if we aren’t willing to compromise on one, we may find ourselves changing our pump sites every 48 hours.

{Editor’s note: Amy uses in Apidra in her Omnipod, and actually does need to change her site every 2 days; looks like we may have discovered the explanation for that.}