The Diabetes Book I Wish I Wrote: Cheating Destiny

Welcome back from Thanksgiving break, everybody. I hope it was an enjoyable one.  You did pretty well on food choices?  Personally, I’m still bloated.  Bought reams of salad yesterday for the “cleansing” peroid 🙂

In any case, what I wanted to share was that I spent some time this weekend with James S. Hirsch’s new book, 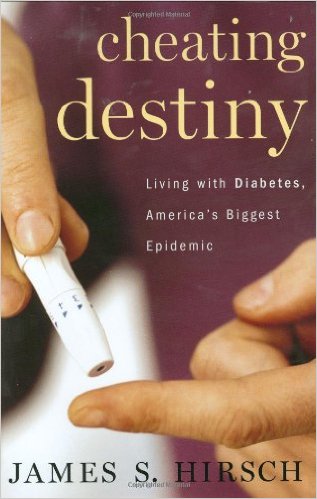 Cheating Destiny: Living with Diabetes, America’s Biggest Epidemic.  I’m about halfway through it now, but it only took me about halfway through Chapter 1 to realize that this is the book about diabetes I wish I wrote myself (all except the part about flipping the car with his toddler son in the back seat).  But still, Author Envy in a big way.

What makes this book so great?  Clearly the result of “voluminous research and dozens of interviews,” it reads like an engaging narrative of the highest order.  In other words, how do you turn loads of statistics and personal testimonials about suffering from an unpleasant disease into a book so compelling it’s hard to put down?  Hirsch has cleverly woven together everything from the carnavlistic commercialism of the annual ADA Expo to the life of “insulin’s poster girl” Elizabeth Evans Hughes to the trials of America’s leading embryonic biologist.

In a chapter called “The Burden of Control,” he writes about the finger-pointing that has long crippled diabetics with guilt — dating back to the unforgiving methods of Dr. Elliott Joslin himself.  Ugh.  But how refreshing to find this phenomenon laid out clearly for all the world to see and understand.  “All diabetics walk on a gentle precipice,” he writes. “But for some the path is narrower, the ridge closer, the descent steeper.”

It helps that James Hirsch is a former reporter for the New York Times and Wall Street Journal, and already an accomplished author as well.  He’s also the brother of reknowned diabetologist Irl Hirsch, medical director of the Diabetes Care Center at the University of Washington.  Both brothers have had Type 1 diabetes since they were children, and James’ young son Garrett was recently diagnosed as well — which plays out dramatically in the book (and was covered recently by Parade magazine).

btw, I met James at a recent book reading here in San Francisco, an intimate event held in a private home.  We chatted briefly. A mid-size guy with scruffy hair and smiling eyes, he was so unassuming I’d never have picked him out of the crowd as the author; he didn’t look like the kind of guy who’d write such eloquent prose.  But then again, not may of us look like we have a chronic disease, now do we?  Lucky us.