The Jury's Still Out on Victoza

Novo Nordisk is well-known in the diabetes community for its insulins, Novolog and Levemir, used to treat mainly type 1 diabetes. But in the last year, Novo launched a new kind of injectable, a "first line of defense for people with type 2 diabetes" called Victoza (generic: liraglutide). It's a glucagon-like peptide-1 (GLP-1) drug designed to stimulate insulin secretion when hyperglycemia (high blood sugar) is present. 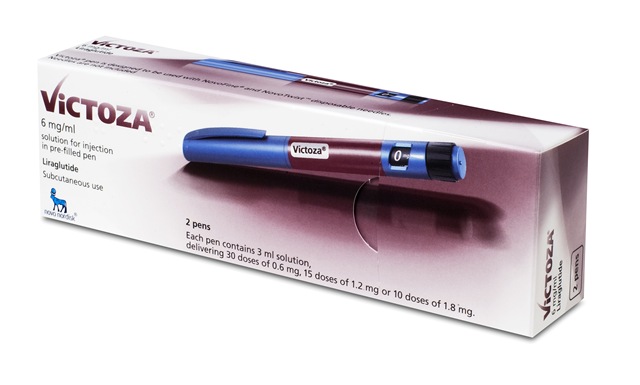 Victoza is still the new kid on the block here in the US, having just been approved by the FDA on January 25. It was approved in Europe last July, and has already been used by a fair number of patients there.

The big question on the market, and among doctors and patients now is, how will Victoza stack up against Byetta, the most well-known injectable drug for type 2 diabetes? Byetta has been very successful as a weight-loss aid, but the nausea it causes makes it intolerable for some people.

One big difference is that Victoza has a longer half-life, so it can be injected just once a day, at any time. Byetta, by contrast, has to be taken at every meal.

How Well It Works

Through an online query, I was lucky to hear from Raymond, living with type 2 diabetes in England: "The doctor prescribed Victoza for me on the 6th of February and I have been taking 0.6mg per day at 8am. I have been able to reduce my insulin from 160 units per day to 100."

The side effects, he says, were some nausea and stomach pains which lasted only about a week. "My appetite and hunger has been reduced and I seldom finish my evening meal. Most mornings I have to force myself to eat breakfast but I know I must keep a regular eating pattern. The Victoza I believe has really helped me as I was fast becoming insulin-intolerant."

OK, so Victoza received two thumbs up from both Raymond and Diabetes Care — but there are still some concerns. Victoza was given a Black Box warning: "Because of the uncertain relevance of the rodent thyroid C-cell tumor findings to humans, prescribe Victoza only to patients for whom the potential benefits are considered to outweigh the potential risk." Although the marker for thyroid cancer present in patients was high, it was still within normal range, according to the authorities. Still, the only way to find out is to continue ongoing cancer monitoring for the next 15 years (!)

There have also been discussions that drugs like Byetta and Victoza can cause an increased . In response, the drugmakers state: "There is no clear association between this class of drugs with pancreatitis. We know that increased risk of pancreatitis with people with diabetes is three-fold over people without diabetes." So while there is a warning that pancreatitis is also a risk, no clear cause and effect have been proven.

Alan Moses, Chief Global Medical Officer for Novo Nordisk, explains Novo Nordisk's POV on Victoza: "Medications for patients are imperfect at best. They don't treat underlying abnormalities of the disease. There are side effects that are not well perceived by patients: weight gain, hypoglycemia. If patients are already overweight, then gaining weight is the wrong direction. It may further exacerbate their disease state as well. Those issues are some of the reasons why Novo Nordisk decided to pursue this therapeutic area."

So Novo believes that Victoza is a fix for all those problems? Mr. Moses admits that the company also became interested in working on Victoza because their insulin products are predominately used by people with type 2 diabetes later in the course of the disease. Victoza gives Novo an opportunity to start at the diagnosis of type 2 diabetes, hopefully to extend the ability of a person to use their own insulin. "We provide patients with reliable, efficacious products the whole life-cycle of diabetes, " he says.

My own endo shared her initial thoughts: "I'm trying it on new GLP-1 candidates so I can get some experience with it. I try it especially on people whose fasting blood sugar is higher than I'd like (over 100) since I think it works better on fasting blood sugars, though possibly not as well on postprandial BGs. Need more time to get a real feel for it clinically."

Still new, it may take time before we know how Victoza really works out for people. Anyone out there tried Victoza yet? Or been recommended to do so by your doctor? How have you found it? Please take a moment to share your thoughts in the comments section here.

The FDA has just issued a safety warning on Victoza, associated with possible risks of thyroid cancer and pancreatitis. Please see our coverage by clicking here.