Dario: Turning Your Smartphone Into a Glucose Meter

Have you heard of Dario, the new smartphone-compatible glucose meter that’s about to debut over in Europe and will hopefully be heading for the U.S. market within the next year?

It’s a bite-sized meter that lets you turn your smartphone into an integrated glucose meter complete with strips, lancet poker, and phone app. More precisely, it’s an integrated unit about the size of a cigarette lighter that includes a basic adapter that connects into a smartphone’s audio jack. Very cool!

“This would be the tiniest all in one device on the market that’s designed with the patient in mind, from the very beginning,” says Dr. Oren Fuerst, CEO of the young Delaware-based startup company LabStyle Innovations that created the Dario.

We haven’t gotten our hands on one of these yet, but the dynamic retro-cartoon video clips the company recently released on its YouTube channel sure make this look like a must-have gadget! A bit reminiscent of the kids’ series Veggie Tales, the spots feature green, yellow and pink figures that look like animated veggies and fruit. There are now four of these videos leading up to the anticipated regulatory approval of Dario in Europe.

Sure, call it over-the-top marketing. But they’re fun and exhilarating, and can’t we use more of that in chronic disease care??

As soon as you connect the device, your smartphone switches to BG-monitoring mode. You then click open the self-contained lancing device that has disposable lancets inside and an integrated cartridge of 25 propriety test strips, allowing you to poke your finger just like any other meter. The reading you get is transmitted directly to the smartphone through an app that’ll be available for free for both iPhones (and i-devices) and Andriod systems (!).

The app will allow PWDs not only to immediately see and automatically upload BG results, but also to add food information into a database — along with easy access to carb estimations, an insulin calculator, and other features like data-sharing online. Not to mention the array of alerts and reminders that PWDs could program in at their choosing.

Dario uses ultra-thin lancets, and you would buy the 25-strip cartridges with propriety strips from the company (or from a supply provider who will eventually stock them). We’re too far out to talk cost yet, apparently, but Fuerst doesn’t envision the cost of Dario being much different than existing meters on the market. 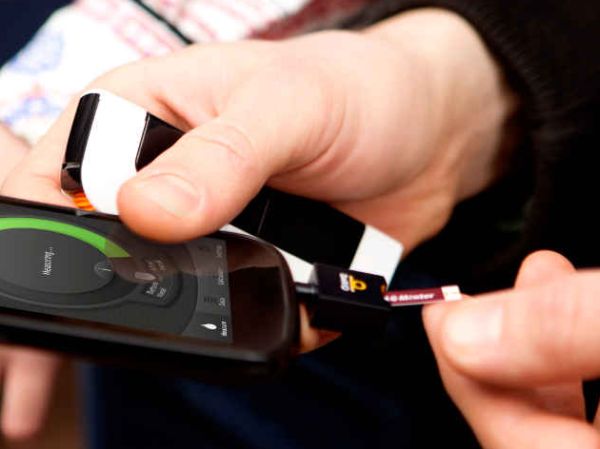 To its founder, the Dario is a cross between Sanofi’s iBGstar and the Mendor meter from Finland that is also an “all-in-one” unit with meter, strips and lancing device. (Note: Nothing new to report on the Mendor since its CE Mark approval back in August 2010; a company spokesman says they’ve yet to receive FDA regulatory approval and there’s no clear timeline on that.)

This is LabStyle’s first product since its founding in 2011. Fuerst, who calls himself a “serial entrepreneur” with years of experience in the innovation and investment world, says the Dario concept originated with a colleague named Dr. David Weintraub in Massachusetts, who’s not only director of one of Israel’s medical centers but also a type 2 PWD himself. The two chatted about the evolution of meters, how these tools really hadn’t changed fundamentally in three decades, and how it was time for a new platform.

You know, it was high time for a new D-device that could “change the game and alter diabetes care as we know it.” A couple years of engineering, clinician and patient review led to what they now humbly dub “one of the most well-designed and patient-focused systems on the diabetes market anywhere.”

Tall order for a device not even approved yet, but we should be able to see soon enough once the Dario gets CE Mark regulatory approval over in Europe — Fuerst expects that to happen “any week now.”

Sexy, But Will It Change the Game?

Honestly, we’ve been hearing about up-and-coming “all-in-one” meters for a long time, and Sanofi’s iBGstar is hailed as the “first plug-in smartphone meter.” So, why is this such a gamer changer in the creators’ eyes?

The Dario does look sexy, with a design that will surely draw customers in. On first impressions from online images and descriptions, the Dario looks like a diabetes device should look in the year 2013... because its appearance doesn’t say “medical device” much at all, except maybe when you’re actually pricking your finger.

Because of these good looks and the fact that it’s small, convenient and self-contained, Fuerst believes the Dario will lead to people want to check their blood sugars more often and that will lead to better health. Our reaction: the idea that it’s going to change behavior and make people more “compliant” is a HUGE order for any device! And probably overly ambitious…

Still, Dario is unique in that users will be able to analyze data directly on the phone app, send data to caregivers and doctors, and even have their data examined in clinical research and epidemiology studies about the distribution and patterns of diabetes management.

Fuerst also says that their hope is to have Dario become compatible with electronic health records (EHRs) and other services that would offer interoperability with insulin pumps and CGMS (continuous glucose monitors), and possibly even Pharma-interaction on the app in terms of learning about or ordering prescriptions if users so desire.

Of course, that made our “privacy red flags” go up on this end. We’re very much in favor of data and device interoperability. But the direct connectivity with personal health records and with Pharma companies’ databases… well, that brings up a whole host of other issues.

When asked how exactly this would happen, Fuerst wasn’t able to say much more than that “it would have to be something developed with regulatory approval.” But hey, the vision’s there, and that helps make this future-facing device even more interesting, right?

“The user experience with look, feel and functionality is what we’ve focused on,” Fuerst says. “Type 1s have been craving a company and product like ours, and it’s so close.”

Like anything in the diabetes world, Your Opinions May Vary on whether this meter is as exciting as it looks. We’re certainly intrigued, and look forward to taking it for a test drive once it’s available Stateside. (They’ve got a signup for those interested in being early adopters here.)

In the meantime, those creative little animated Dario videos might be just the ticket to perk up a crummy D-day!