I have been using Afrezza, the new inhaled insulin developed by MannKind and marketed by Sanofi, for the last three and a half weeks.

So far it’s… mysterious and exciting. Mysterious because the dosing seems ridiculously imprecise compared to the micro-unit counts I’m used to with an insulin pump. And exciting because I’m finding that Dr. Steve Edelman was right – this stuff really does work extremely well! I don’t think I’ve seen such a lovely lack of glucose spikes since around the end of 2004, when my diabetes honeymoon officially ended.

Other major benefits of taking Afrezza as an insulin-pumper I’ve discovered are:

Let me put it out there: I hope this is more than a test drive. I hope my insurance company plays along so I can stay on this stuff!

It’s a funny little thing, this inhaler. My family giggles every time I use it, because yes, it’s reminiscent of sucking on a little ganja pipe (thanks, Shutterstock). Sometimes you can feel a scratchiness on your tongue as you inhale – like the powder passing over.

In training, I was told you have to hold it very level, and be careful not to turn it around or even jiggle it once you’ve placed a cartridge in and pressed the top down – otherwise you run the risk of losing some of the powder. They say you should inhale normally, but I’ve found that if I don’t suck my breath in hard, some powder residue does remain in the cartridge or sprinkle out of the device right after use.

You’ve probably heard that Afrezza comes in 4-unit (blue) and 8-unit (green) cartridges. If you run into any red cartridges, note that those are blanks, for demonstration purposes only. The whole product comes packaged in a box with two foil-sealed sleeves of cartridges and two inhalers, which are meant to be disposed of after two weeks, as residue build-up may block dosing after that amount of time. 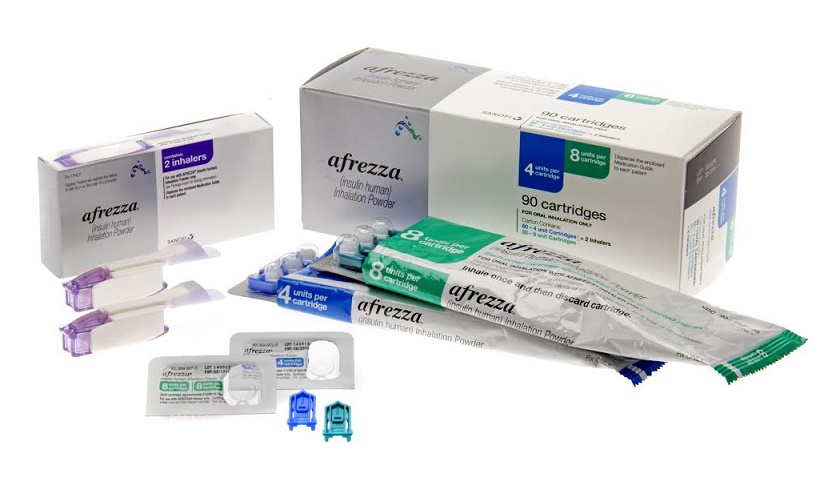 The packaging insert instructs you to keep the cartridges stored in the refrigerator, other than the amount you need to carry around for present use. During training, the Sanofi rep told me that just like with liquid insulin, extreme temperatures can render it ineffective.

My doctor started out recommending that I use Afrezza to cover meals only. But I quickly found that was confounded by giving correction doses on my pump, which were often still active in my system when mealtime came — so it would be impossible to judge the effect of the Afrezza on its own.

So we agreed I should start using Afrezza for both mealtimes and corrections, and that’s when things started getting good. I started seeing pretty flat lines on my CGM, often not exceeding 160 after a meal, and when needed, those Afrezza corrections kick in fast! (within 1.5 hours latest). I found I could watch my 220 melt away before my eyes.

The extremely weird part is the unfamiliar “block dosing” as I call it. As a pumper who’s used to relying on a Bolus Wizard to set precise doses of 3.25 or 5.5 for example, what the heck would I do with just two set options of 4 or 8 units? How could that possibly cover my carbs correctly?

Turns out, this simplicity is one of my favorite things about Afrezza. My doctor started out by suggesting that I dose one 4u cartridge for any meal less than 40g carb, and an additional 4u for over 40g carb. However, we noticed that I was often on the upswing after a meal and would have to keep correcting, therefore we lowered the threshold to 30g carbs.

I eat pretty low-carb, mind you, so I rarely take more than 4 units at a time. But I did notice that when I do eat higher-carb choices, I seem to need even more Afrezza than suggested, and definitely more than I would use with subcutaneous insulin.

Two things I’m still figuring out are exercise, and what to do about “small” corrections when I’m only at 150+ and want to come down a bit without going hypo.

Regarding exercise: the most difficult change in mentality is a new view of IOB – how long does Afrezza really stick around in your bloodstream? Not very long, it turns out. Which is a good thing!

I’ve found that my previous temp basal settings are no longer useful, because they were accounting for at least some residual IOB from my breakfast dose. That is, I mainly work out in the mornings and would reduce my breakfast bolus by 50% in advance of the temp basal I’d use for my workout.

“Now, if I have no choice but to take those 4 units of Afrezza, what will happen during my aerobics class? What should I do?”

That was a frantic email I sent to my doctor, to which she replied: “Probably 0% (temp basal) for one hour after the Afrezza dose, then 50% for as long as you normally would decrease it. If you’d prefer to try something else, go ahead, but have a high index of suspicion for hypos and be prepared.”

So far I only had one exercise-related hypo, and that was when I took an Afrezza correction at the very end of a gym class, and then didn’t end up eating lunch for a while. I guess getting that Afrezza blast while I still had 15 minutes of hard exercise ahead of me wasn’t the best idea.

In terms of making corrections when I need just a small adjustment, like from 145-160, my doctor’s encouraging me not to go back to taking corrections on the pump, which will stick around too long and complicate things. Instead, she’s suggested I try a dose of Afrezza when I’ve been at 150+ for at least 2 hours since my last meal dose – but “at a time when the family is home with you and you’re all alert for possible hypos.” We’ll have to see how that works.

I sure do wish Afrezza also came in 2-unit cartridges, to be able to make these small corrections without having to worry about going low. Meanwhile, my endo and I are still experimenting.

Nevertheless, I can tell you that my numbers – and CGM lines – have been greatly improved in the last weeks. 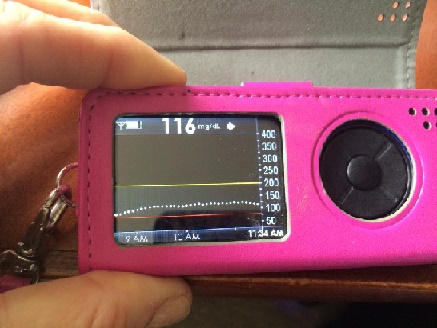 My doctor keeps asking me about this, as apparently it’s been a thing for a number of new patients. So far I mainly feel a dryness and scratchiness at the base of my throat – so that I feel the need to clear my throat often.

Some fellow Afrezza users on Twitter have suggested gargling with water, and/or drinking a glass before or after dosing. Thanks for this and several other tips, D-Peeps!

My doctor also suggested a product called Biotene for dry mouth. Haven’t tried that yet.

Finally, I wanted to note that few new diabetes products have stirred up such a frenzy of investor stalking and patient debate as Afrezza already has. I tweeted recently about the fact that I never had to block any followers on Twitter until I started mentioning #Afrezza.

Here’s the deal: there are Bulls and Bears on both sides of this product. Many have criticized original @Afrezzauser Sam Finta as being a shill for Sanofi and MannKind.

I can honestly say that I was VERY SKEPTICAL myself of this new inhaled insulin. But I’m just keeping it real: so far the stuff’s worked very well for me, and I’d like to keep using it – as long as my scratchy throat and insurance company play along.

More updates to come as we all gain more experience with Afrezza.