Imagine just being able to fire up an inkjet printer and print out perfectly usable glucose test strips. Ah, the money that could be saved, among other things!

It may seem off-the-wall strange, but a startup company that began almost three years ago as a Clemson University student research project in South Carolina, Accessible Diagnostics, is developing what it calls GlucoSense, a new type of test strip made out of commonly-available materials that costs just pennies to make in comparison to what’s out there now.

We also happened to hear of a Bangalore company developing silk-weaved strips featured in a recent NPR story, with hopes of rolling out their offering by year’s end.

These efforts come at a time when both health care costs and the rates of diabetes are skyrocketing in the U.S. and around the world — meaning more people than ever need glucose strips, while fewer have affordable access these essential diabetes supplies.

Since GlucoSense is led by in large part by a young type 1, just finishing grad school, we couldn’t wait to find out more.

A Solution for Tanzania

The Chief Technology Officer is 24-year-old Kayla Gainey, fellow type 1 who was diagnosed at age 2. Kayla got involved at Clemson when she went to speak to her professor, Dr. Delphine Dean, about graduate school and a possible summer internship. She heard about the research project aimed at helping those with diabetes in the East African country Tanzania, where diabetes supplies are far from accessible. Dean had met with the country’s leader, who told her about the huge diabetes problem there and how even donated supplies don’t help much because the meters and strips are often mismatched, and cannot be used together.

So, Dean came back with this idea and soon enough had roughly a dozen students involved, including Kayla. GlucoSense was born.

Here’s a video the team made explaining these issues, and describing how their new low-cost meter and printable strips work:

“I’ve always been a tinkerer and found any excuse to get my hands on a tool,” Kayla says, noting that is what put her on the path of studying bio-engineering with the goal of eventually going into insulin pump design. That all fit right into her own D-world, as she’s been insulin pumping since her childhood and also uses a CGM. “I’m not saying I can do it better than anyone. Just that I understand the patient perspective, and that could be an asset.”

When she started on the GlucoSense project in summer 2012 as one of about a dozen students, Kayla says she started to feel her focus switch in the diabetes device design universe, and she was hooked. Now, nearly three years later, this has become her graduate school project and she’s officially the CTO for Accessible Diagnostics, serving with co-founders that include her Clemson professor and also a local South Carolina businessman and investor.

“This whole startup process has been a happy mistake,” she says. “We weren’t planning for that to happen when this research project began; we were just trying to make a successful meter and strip that could help people in Tanzania.”

The meter isn’t complicated, Kayla says. It’s similar to the old bulky LifeScan OneTouch 2 meter that debuted in the early 90s. The idea is that it’s made from the commercially-available equipment that they have in Tanzania so they can make these themselves, at low cost.

Here’s a look at an early prototype of the meter: 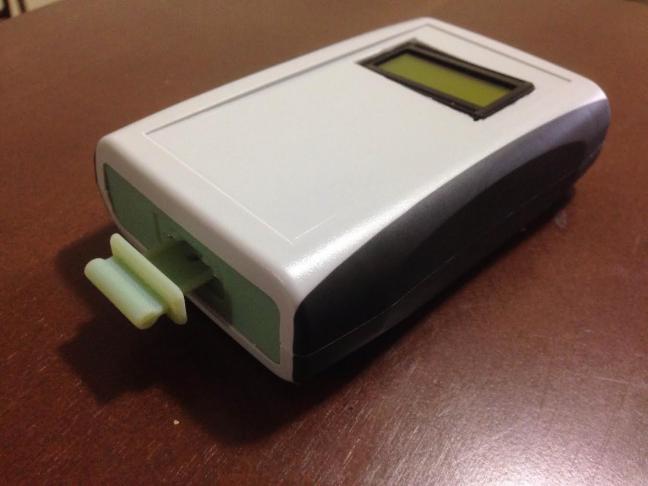 “It’s a rectangular box and not a very tiny meter, but it’s partially because we’re working with 9-Volt batteries. Those are solar-rechargeable there, and that’s important because many homes don’t have power,” Kayla says. “But that adds bulk to it. We went back to the older tech because it’s less expensive.”

As for printing the strips from an inkjet printer: Instead of shooting out ink onto the paper, it spits out enzymes that coat the piece of paper to create these glucose strips. And the cost? Roughly 5 cents per strip, compared to the big-brands that run as much as $1 or more each. 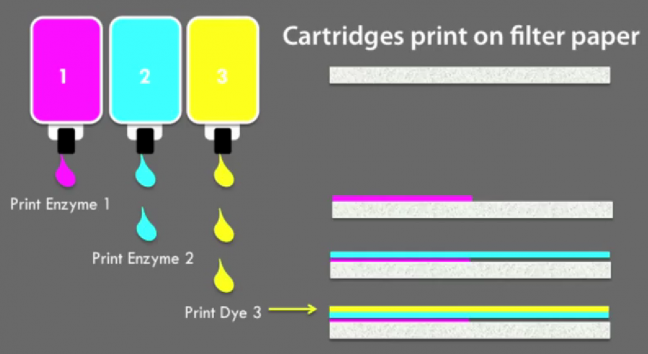 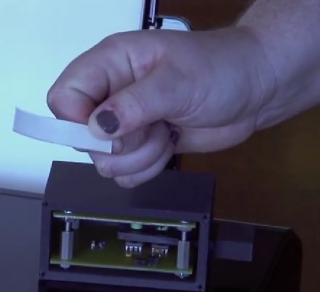 Since the internal components of the strips are different, you also use them slightly differently, Kayla tells us. Normally, you insert a strip into the meter and then apply blood on the edge, and it sucks that droplet into the strip for processing a result. But with GlucoSense, you apply the blood drop in the center of the paper strip first, and then place the paper strip into a cartridge that slides into the meter for reading results.

Actually, Kayla tells us that a big foundation of this technology is the “retro” component; it goes back to the 80s or 90s standard, when blood drops were bigger, the test time was longer, and the meters seemed super-sized compared to our 21st century devices. And Kayla claims that GlucoSense is actually more accurate simply because those factors allow for it. Modern meters have more complicated processes going on inside, packed into smaller packages, so the meters aren’t always as accurate as the ones we had a couple of decades ago.

“With this older tech, there is less room for human error compared to what we have now,” she said.

Kayla says the business is talking with the International Diabetes Federation’s Life for a Child program, exploring a partnership that could get this meter to various places around the global beyond Tanzania, once their prototype is finalized and funding and approvals are in place.

Meanwhile, it’s unclear how and when GlucoSense could make its low-cost testing system available in the U.S. The Accessible Diagnostics team is hiring an FDA consultant to start regulatory conversations, we’re told, and hopefully in the next year they will know more about how regulators are thinking about this “retro” approach to glucose testing.

Volume is one big issue, since one set of GlucoSense inkjet cartridges makes 4,000 strips, which is fine for distribution in a clinical setting (as is practice in the Third World). But for an at-home kit, it wouldn’t be ideal since the strips would expire more quickly than an individual PWD would be able to use them.

Automating production could change that, but much depends on FDA reactions, Kayla says. Of course, they would someday like to see this become an open-source, do-it-yourself system for PWDs everywhere, if possible.

They are hoping to clarify regulatory issues in the next year and have at least some version of their low-cost testing product to sell here in 2016.

“I am very proud of all this, and hope we can also use this to encourage people with diabetes — especially the younger ones,” Kayla says. “I’d encourage diabetics to use their diabetes to help others, to see it as a positive. You don’t have to go out and invent a glucometer or strip. Just go out and be an advocate, help people be aware of diabetes no matter where you live.”