After a decade-long run, Novo Nordisk’s FlexPen is being retired. Yes, one of the most popular insulin pens for people with diabetes is on the way out after more than 1 billion have been sold through the years.

We first saw the new Novo FlexTouch debuted at the American Diabetes Association’s 74th Scientific Sessions in June, where Novo asserted that after “years of feedback” from endos, educators and other health care professionals, several new features have been added to this new pen that make it stand out from its predecessor.

Hmmm… patients weren’t included in that feedback list? Apparently the perspective of people with diabetes wasn’t worth hearing or recognizing when marketing this new FlexTouch to, well, us. So, what did these experts come up with?

This new pen — initially released prefilled with the basal insulin Levemir — sports one major game changer: how it delivers an injection.

Novo has completely re-engineered the insulin pen so that dialing up a dose doesn’t cause the traditional push-plunger to extend out of the back of the pen. Now, this change might not make much of a difference for some of us type 1s, who use only 5, 10, 15, or 20 unit basal doses. But when you start getting into larger doses that are more common for type 2s, the push-button extension on the old FlexPen can actually add an inch-and-a-half to the length of the pen! This is one of those rare times that adding inches is a bad thing, as most people push that insulin pen plunger down with their thumb — meaning you might have to uncomfortably extend your thumb or even use two hands to dose your insulin from the pen.

Not so with the new FlexTouch, that has a flat push-button you just hold down to deliver the dose.

The new FlexTouch also increases the maximum shot from 60 units to 80 units, the same as the competing Lantus SoloStar pen. Remember, an 80-unit basal dose isn’t an unusual amount for our T2 cousins. That said, oddly, the new pen still only holds a total of 300 units of insulin. At maximum dosing, you would only get three full shots before the gun is empty. Is that enough for a street fight with diabetes?

One other change is that this new pen has a longer shelf-life (or refrigerator life, as it may be), of up to 6 weeks versus the 4-week shelf life of the older FlexPen. The FlexTouch can be used for 42 days once it’s taken out of the cool air and used for the first time.

You might also find it interesting that the coloring is different, designed to make it easier to read the markings on the insulin dial. Now, the dosing dial is printed with black text on a white background, compared to the more-difficult-to-read white text on black that the FlexPen had offered.

There’s one other new feature that I personally find to have questionable value: A small protrusion on the barrel of the pen, right in the middle.

I asked the Barbie (err, the pharma rep) who brought me the sample pens what it was for. “Oh that’s so cool,” she gushed. “It’s to keep the pen from rolling off a surface. Watch…” She set a pen on my desk and gave it a flick of her finger. The pen rolled right across my desk, went off the edge, and fell to the floor with a sickening Tha-Wack!

Her face fell farther than the pen did.

To be fair: Maybe it wasn’t meant to withstand the force of that finger-flick. Mike says he’s found his insulin pen often rolls off the table when he sets it down, so this non-roll bump seems like a handy feature to help stop that from happening. Of course, if you were to flick the pen hard enough with your finger like what Barbie did in my office, it would likely still roll off, so to me it’s not a 100% guaranteed to stop the rolling.

Your pen opinions may vary.

My first thought when I took the FlexTouch out of its box was that it’s a good deal fatter than the old pen. But as fatness is hard to quantify, I decided to measure the diameter of both the new and old pens as ring sizes. (Thanks, Zales!)

Still, basal insulin is generally injected at home, so maybe a bulkier pen isn’t too much of an issue. However, I worry about how a less-portable pen might affect fast-acting insulin use. Novo has FDA approval to put Novolog in the FlexTouch as well as Levemir, and it’s worth noting that Novo’s pen page online features a FlexTouch wearing the Novolog orange label. It would make sense from a manufacturing point of view for Novo to make only one kind of pen. Does all of this mean there’s a FlexTouch pen coming to a Novolog prescription near you soon?

I reached out to Sarah Spielvogel, Novo’s senior manager of diabetes product communications, who said the “timing is still to be determined.” So who knows when, then, but it would appear to be inevitable.

But back to the hands-on experience of the pen. The FlexTouch isn’t any heavier in the hand. And dialing up a dose is silky smooth, or as silky smooth as it’s possible to get from plastic parts. As you increase the dose, the pen makes a pleasant noise, a little like winding a watch. But if you over-dial your dose and need to reverse direction, the pen suddenly sounds like a poorly manufactured toy machine gun, and the entire pen shakes in your hand. By comparison, the FlexPen has the same slightly-cheesy ratcheting action in both directions.

Injecting with the FlexTouch is easy, yet oddly disconcerting. The first time I slipped the pen needle into my skin and pressed the “low injection force button,” the pen made a sound like a ticking time bomb and then let out a soft click. Novo calls this last sound “a confirmation click,” and it’s supposed to let you know you’ve fully delivered your dose. With every other pen ever made, I’ve been able to feel when the plunger is rammed home and known that the job is done. With no sensation of plunger travel, I found myself standing in the bathroom with the pen sticking out of me like a fool wondering if I’d gotten my dose, and debating about how long I should hold the pen in place. Now, even 14 or so shots after getting the pen, I’m still not used to it.

Of course, not everyone sees it the same. For example, Mike points out that he’s had trouble in the past trying to figure out when his full amounts have been dosed if he’s not looking right at the dosing dial. So to him, this confirmation click is a handy way to know the full dose is delivered.

When training type 2s using larger doses on the pen, I’ve noticed that people have a tendency to let go of the plunger button too early, stopping the delivery of the insulin. If you look at the dose dial, it will not be at zero, but as someone who likes to worry, I can see PWDs taking partial shots and NOT looking at the device to see if they got it all. When you inject a partial dose, the pen does not make the confirmation click sound, but letting up on the button does make a similar click, so I’m guessing under-dosing is going to be this pen’s biggest problem.

And like the older pen, you can still cap the pen with a needle in place (good) but there’s still not room in the cap to carry an unattached needle. Come on, Guys, another four millimeters would have done that trick!

From one of the dozens of Novo websites:

“FlexTouch is the first prefilled insulin pen with a unique spring-loaded dosing mechanism. When the user dials the dose, the spring is wound tighter inside the pen. The spring is therefore absorbing the force that would normally be created by the user’s thumb.”

I wondered how that works and what the spring looks like? So I thought: let’s cut the pen open and find out! 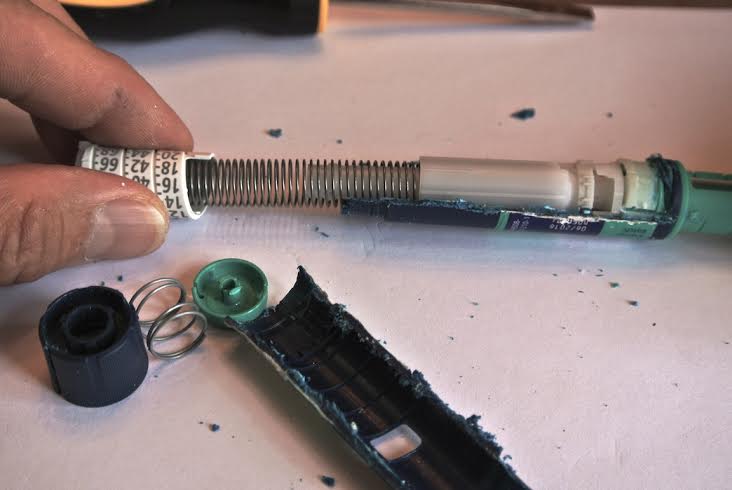 OK, even after cutting it open and studying all its guts, I’ve still got no clue how it works.

I think for type 1s, the new pen will make little difference. I think for type 2s, who shoot larger volumes of insulin, it will be a modest improvement. And while the larger diameter is a minus in my book, I suspect the beefier size might actually be a plus for the elderly patient with arthritic fingers who might have a harder time getting a good grip on a skinny pen.

But to be honest, I’m really not all that wild about disposable pens in the first place. I prefer the refillable type, and have been using a FlexPen only because Novo doesn’t sell their Levemir penfills in the USA. Why do I prefer refillables? Party for the reduced landfill waste, but mainly for the sheer joy of the quality of the damn things. Oh, and speaking of landfills, the old FlexPen was made of a special plastic supposedly designed to biodegrade rapidly. (But I haven’t put one in a compost heap to test that claim… yet.) The good news for those concerned about how the next billion Novo Pens will affect the environment is that, according to Novo spokesperson Spielvogel, the new FlexTouch is made of the same quick-to-break-down plastic that the FlexPen was.

Novo claims that the new pens are available on “more than 96% of commercial and Medicare Part D plans nationwide,” similar to the older FlexPen. They also say that FlexTouch co-pays should be the same as they were for the older pen.

My field rep told me that the FlexTouch pens are already in all the pharmacies, and that her company expects the Levemir FlexPen inventory to be exhausted by September of this year. Novo reps are encouraging docs to re-script all current pen users, as the company is worried that once the inventory is gone, pharmacies might reject FlexPen prescriptions — rather than fill the script with the new pen — leading to delays in PWDs getting their meds.

The Barbie rep who brought me our first batch of samples, after enthusiastically showing me all the features asked me (with naïve sincerity): “Don’t you think these features would make patients who use the Lantus SoloStar want to switch?”

I laughed out loud. Not that the new features aren’t good. But they are evolutionary, not revolutionary. If Novo really wanted to knock it out of the park they should have figured out a way to put 400 or 500 units in the pen — especially since you get another two weeks out of these FlexTouch pens.

But honestly, the point is moot, because patients don’t get to choose their insulin brand. In fact, doctors don’t get to choose their patients’ insulin brand anymore either. It’s often the insurance formularies that dictate which insulin we use. So if insurance companies charge you more for the Novo pens instead of the Lantus SoloStar pens from Sanofi, then it really doesn’t matter if the dosing mechanism has a push button or traditional plunger. It comes down to what insurers tell you.

For the rest who do have a choice, maybe these pen design features will “touch” someone’s life in just the right way to make a difference.