Of course, we get excited about new technology and love being able to test drive the latest gadgets. And with my 32 years of type 1 experience, I do appreciate how far we’ve come. From time to time, I enjoy looking back on the past D-tech to give myself perspective on just how good we have it today.

But as much as I love progress, I’m not a fan of removing basic features that have made our lives with diabetes easier and more flexible in this day and age.

Sadly, that’s what I feel the newest OneTouch Verio Flex glucose meter by LifeScan does. This meter launched at the end of February 2016 seems like a step back in time by at least a decade.

Of course, the whole point of this curvy new white-faced meter is to offer a very prominent “color range indicator” for low, in-range, and high readings (blue, green, red) to help patients who otherwise had trouble interpreting their blood sugar results. What comes to mind are older patients or probably many type 2’s who may be less savvy about what the numbers mean than those of us making insulin dosing decisions all day long.

The company touts: “While it has broad appeal as a simple, intuitive meter on its own, patients can also use the meter’s built-in Bluetooth Smart Technology to wirelessly connect with the companion OneTouch Reveal mobile app available on compatible iOS and Android mobile devices.”

In other words, it’s supposed to be a super-simple meter, but with all the latest wireless bells and whistles. Odd combination. It replaces the now-discontinued Verio Sync, which may still be lingering on store and pharmacy shelves.

There are a number of good points about the new Flex, including the low cost and how it’s the first to include both iOS and Android comparability with its mobile app. We applaud LifeScan for taking those steps, as well as assuring that this new meter uses existing Verio test strips so patients don’t have to grapple with the headache of switching strips to use this device.

It’s also worth noting that LifeScan recently sealed a deal with WellDoc, bringing its Verio Flex meter and OneTouch Reveal app together with WellDoc’s BlueStar app offering the capability for mobile subscription refills — all to offer more mobile health solutions for type 2s, per the press release.

Those are noteworthy offerings. But looking at this new device itself, we found some ironies in the plain but sophisticated logic.

In a nutshell, here’s what the new Verio Flex has to offer and what we think about those features:

Interestingly, LifeScan tells us that the name Flex was derived from “flexibility,” in that it’s aimed at helping PWDs better manage their diabetes on the go.

We’re also told the Flex builds off the “mass appeal of the OneTouch Ultra family of meters” that have pretty much all been discontinued to date, although it uses the Verio platform test strips. That seems to put into perspective what this Flex meter’s missing, mainly the backlight that most of the Ultra meters never had (except for my fave, the UltraSmart, discontinued in 2012). 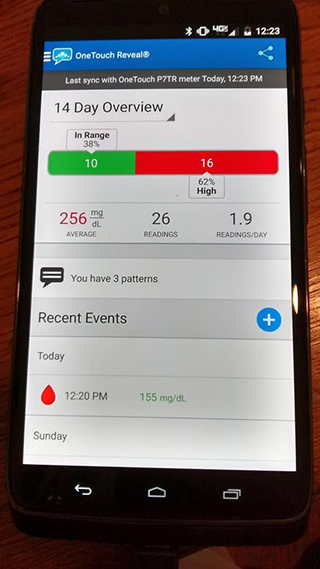 The One Touch Reveal App

Despite our issues with the meter, we like this mobile app.

It’s pretty similar to what’s been out there with the Verio Sync for the past few years, but this was my first personal exposure to it.

From beginning to end, it was simple and easy to use and makes up for a lot of what the meter lacks. I like the pattern views, although as noted above I’d really like to be able to view my 7-day averages on top of the 14, 30 and 90 day trends.

You can add all kinds of info to it, too, like carbs and insulin and exercise. And then you can analyze the various patterns (like the many highs I experienced when taking a short pump hiatus without long-term insulin on board). And it’s also cool that you can share the data with your doctor or loved ones, via text messaging and emailing specific results or PDF reports.

While the mobile app gets our thumbs up, in the end we give the new Flex meter a thumbs down.

In fact, we’re very disappointed to hear that the Verio Sync’s been discontinued, since that was the best in this class with meter display, backlight and port light, and mobile app connectivity. And this doesn’t feel like an adequate replacement, in many ways.

Bottom line: The Verio Flex seems like one step forward, two steps back.

Still, it is a lower-cost option for people who simply need to test their BGs, and it still offers that mobile app connectivity to boot.

Actually, I have a family friend who just reached out on behalf of a co-worker who was recently diagnosed with type 2, looking for suggestions on meters. I’m thinking I may pass on this Flex meter to him, along with a full vial of test strips I had purchased previously to try out the Verio meters. I’ll be curious to hear how someone brand new to T2 reacts to this meter and app.

So there’s that. It’s another option that can help someone who needs it, and that’s always good.