I recently had the chance to try out the latest in diabetes tech from Medtronic, conducting a 14-day test drive of the new Minimed Connect data display platform.

This new system shows both insulin pump and CGM data on a user’s smartphone and also allows for text messages when glucose readings are too high or low. 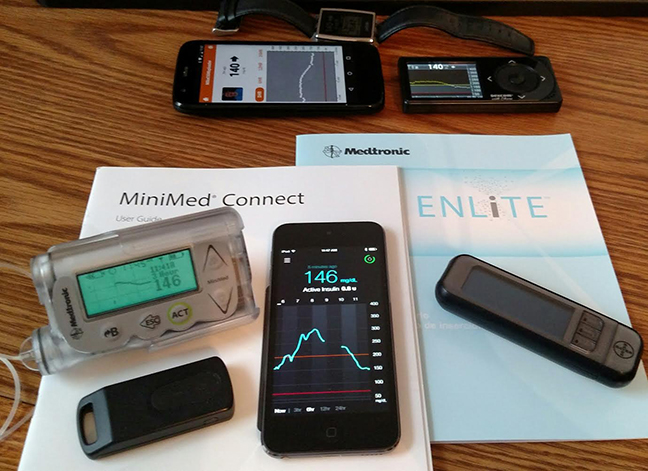 es Association conference in June, leading up to its launch in late September. Basically, it’s an answer to Dexcom’s popular SHARE system and do-it-yourself CGM in the Cloud creations that have been around now for a few years now. In fact, this is a side-by-side comparison to the Dexcom I’m using, with an eye to how Medtronic stacks up to what I’m more familiar with and trust with my life.

After receiving all the needed supplies and attending a local training session, I was ready to begin my test run at the start of December. Note that I hope to keep this trial going for a bit, so this report reflects only my first 14 days of using Minimed Connect to see the data streaming from my 530G insulin pump with Enlite continuous glucose monitor, Medtronic’s integrated pump-CGM system available in the U.S. for about two years now.

I tend to be Mr. Off-Label, someone who doesn’t fully follow FDA recommendations very often. But for purposes of this test drive, I put on my FDA compliance hat as much as possible (while sneaking in a few occasional off-label ripples, of course).

While Minimed Connect is great in many ways and I commend MedT for finally offering a product like this, I found it falls short simply because it’s based on the Enlite sensor that I found amazingly inaccurate, frustratingly unreliable, and way more complicated than it should be.

There are many things I like about this system, but Medtronic has got to do better before the true benefits of this data viewing and sharing can be seen. This new data-viewing tool does not yet realize its potential, as it’s held back by both little issues and the foundational technology it relies on to provide data, IMHO.

Let’s dig in a little, shall we? 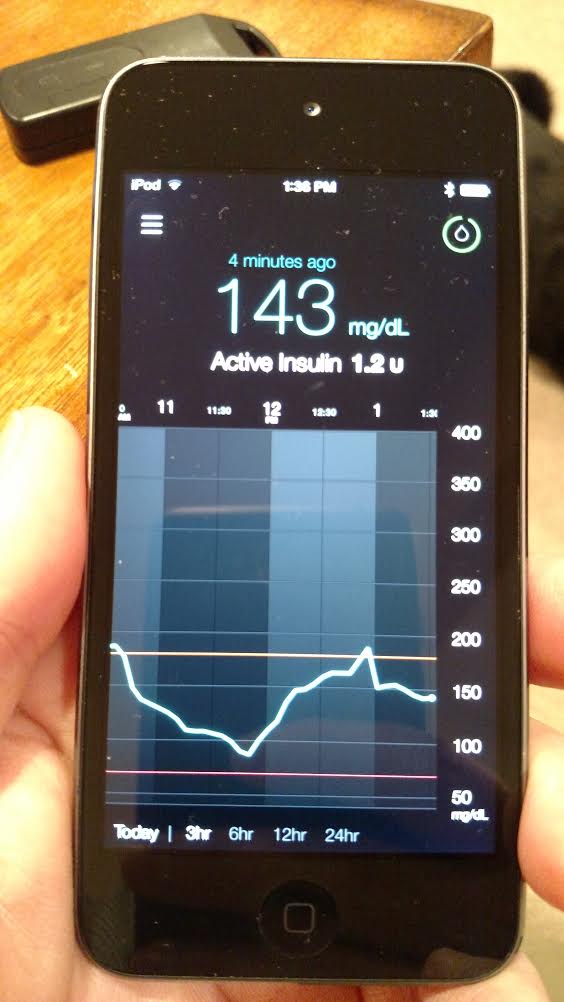 Hands down, I love the look of this diabetes connectivity app.

The phone interface is sleek and modern, and resembles the touchscreen design of the Tandem t:slim pump. The current glucose value is shown very prominently at the top of the screen, with the glucose trend graph below.

Minimed Connect actually works through four pieces – a CGM sensor hooked on to your body that sends data to your integrated pump-CGM, which then sends that to a little black key fob Uploader (2.5 inches x 1 inch x 0.5 inches thick). Finally, that Uploader transmits the CGM data to the app on your iOS-compatible device, where you can view the data.

The system also transmits the data via Bluetooth Low Energy to Medtronic’s web-based CareLink data platform, where it updates that info each night so you can produce reports, share data with your doctor, and or send notifications to caregivers.

Nifty setup, similar to what Dexcom SHARE and the Nightscout/CGM in the Cloud tools have been offering for about two years now.

Here is a quick-glance Pro and Con list of my observations about Connect, as well as my suggestions for future improvements.

It’s important to note that this is the first generation of Minimed Connect, and just like anything else, improvements can and will be made. For Dexcom users or watchers, remember how many complaints there were about the bulky, plug-into-the-wall docking station that came with the unveiling of the original Dexcom SHARE? Or how the first SHARE app didn’t have all the cool interactive features that the new G5 mobile app has? It’s all a work in progress.

Truly, I think MedT has the start of something good here and I commend the company for finally making this move into the mHealth space. It will be interesting to see what comes next.

Moral of the story: MM Connect could be awesome, assuming the CGM results are accurate, and you don’t mind carrying around the little Uploader as a third device on top of your iPhone and insulin pump.

Remember, this whole system is reliant on the Medtronic pump and CGM, so it’s hard to review the app in a vacuum.

The 530G is the company’s most recent pump generation, but the insulin delivery is no different than the previous model, Revel 723 (my pump of choice). Design’s the same, and it does the insulin dosing and delivery job well. Yet, just like with Connect, I believe the Enlite CGM sensor holds back the 530G system from reaching its true potential.

Threshold Suspend is the big claim to fame for this pump generation, as it automatically suspends your insulin if you cross a certain low glucose point (usually 70 mg/dL for most people). This is huge, as it’s the first device to read CGM data and then actually shut down insulin dosing in case of emergency. Yep, it’s the first step toward a closed loop and that’s very exciting on its face.

Unfortunately, as awesome as Connect and Threshold Suspend both are in theory, they’re pretty much useless if you can’t trust the CGM data.

During the first 14 days of my trial run, the most reliable part of my 530G with Enlite experience was that the Enlite is not reliable.

Since the whole point of this was data-sharing and that led me to watch my D-data like a hawk, I meticulously compared results of the Medtronic Enlite to those of my Dexcom G4. The MedT-linked Bayer Contour Link meter was my go-to fingerstick meter, but I also tossed in some tests with my Accu-Chek Nano and OneTouch Ultra meters every so often.

I received four Enlite sensors for this test drive, and so far have used three of them, all of which have been wickedly inaccurate most of the time. Yet my new G4 sensor (FDA-approved for 7 days) that I put on minutes before the very first Enlite sensor, has been streaming along just fine without any issues for two weeks.

Looking at the 13 full days I actually wore an Enlite (since I turned it off in frustration a number of times), and based on my average 10 fingersticks a day, the MedT Enlite was off 73% of the time. Waaay off. As in 50-100 points difference — meaning if I had relied on that number to dose insulin, I would’ve been giving myself anywhere from 2-4 units too much or too little. A majority of those inaccuracies were off-base trends where there were no outside influencers like exercise, Insulin on Board, food in my system or anything unusual to lead the sensor astray. My MedT trainer recommended 3-4 calibrations per day, and that’s what I followed.

In contrast, my Dexcom G4 was within 1-30 points of my actual fingerstick readings 89% of the time.

I also glanced at my CGM data a couple times every hour during these 14 days while comparing the two devices, and by a large margin, Medtronic was usually inaccurate, laughably at times, while Dexcom was reliable to the point where I could have dosed insulin off the results if I’d wanted to. Based on that issue, the Threshold Suspend feature was worthless for me. In fact after a week, I turned the Threshold Suspend and the Low Predictions off entirely.

Between exchanges with my local MedT rep, to customer service calls and what the user guides tell us, the theme of what I heard in response to my Enlite not working well was: “You’re doing it wrong.” Based on sensor placement, pushing the inserter too tight, not calibrating at the best time even though the pump told me to.

I think Medtronic is missing the point.

If we need to follow all of these steps in order for the Enlite to work better, and even then it may be “hit or miss,” MedT needs to look in the mirror and recognize the reality: “You’re doing something wrong in making this technology.”

Sadly, the lack of reliability in Enlite means Minimed Connect isn’t able to do the job that I need it to. So there’s no way I would buy it.

I do encourage other PWDs to try it out for themselves, though, and it so happens MedT is currently offering a free six-week trial of the 530G with Enlite.

The upshot is that the newest MM Connect system didn’t win me over, and I’m bummed that it didn’t do better for me. But of course no one’s writing off Medtronic as an innovator in diabetes tech.

Big news earlier this year (timed with MM Connect’s approval announcement) was how MedT has teamed up with Samsung Electronics for future data-sharing tools and solutions. We know they have a smartwatch CGM display in the works, and they are developing the Connect app for Android. We also know MedT has teamed up with Glooko for data-sharing, and before long we’ll be able to see our CGM and pump data on that platform (along with our Dexcom data, if that’s how we roll)!

We also can’t forget MedT’s announcement in April of a partnership with IBM Watson, bringing the super-smart artificial intelligence that beat out human competitors on Jeopardy into the diabetes data analytics world. That is sure to add a layer of innovation to this, we’d have to think.

The company’s also getting close to filing its next-generation 640G system that has predictive capabilities, along with an enhanced Enlite sensor that’s been many years in the making.

With these developments on the horizon, there’s a lot to look forward to in the next 18 months.

With regards to MM Connect, naturally Your Diabetes (and experiences with any particular tool) May Vary. We do try to look beyond ourselves when trial-testing new stuff, to crowdsource opinions from others in the Diabetes Community.

So if you’ve tried MiniMed Connect, tell us what you think, please!