A new Medtronic insulin pump is now available in the United States, introducing a new des 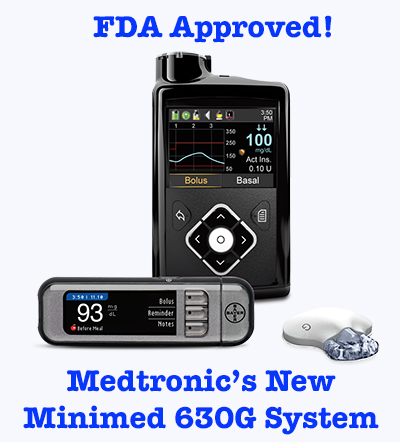 ign and color-screen as part of a complete makeover to these diabetes devices that have fundamentally looked the same for 30 years!

Say hello to the Minimed 630G, which Medtronic announced on Thursday after receiving the FDA’s Pre-Market Approval on Aug. 10. This news caught many by surprise, as the California pump-CGM company hadn’t previewed this product in advance as they typically do before launches. Instead, they’ve focused on their forthcoming 670G hybrid closed loop system, expected to be the first-gen commercial Artficial Pancreas system to hit market in 2017.

A number of users are actually upset that they weren’t warned of this interim product launch, because they’ve recently purchased new products or upgrades. Others were holding out for the future closed loop system.

So we’re all wondering: Just what is this 630G that we’ve heard nothing about before?

Remember, Medtronic got FDA approval in September 2013 for its 530G that automatically stops insulin delivery once a user crosses a certain low glucose level. That was step one in moving toward closed loop technology.

Next up is their Predictive Low Glucose Suspend (PLGS) features that can anticipate oncoming hypos in advance and shut off insulin to prevent them from happening. That’s built into the Minimed 640G system that hit the market outside the U.S. in early 2015. Medtronic ultimately decided it would not pursue bringing that device to the U.S., opting instead to leapfrog that model and focus on getting the first hybrid closed loop 670G to market in 2017.

So now, it seems we’re getting this 630G as a sort of stop-gap device in between the two D-tech generations.

Here’s a quick glance at the Minimed 630G:

Fresh Design: It’s a vertical pump, instead of the traditional horizonal design. This is Medtronic’s first U.S. insulin pump to stand up straight, and you can expect it to be the look for MedT’s pumps going forward. You can hold and operate the pump with one hand, something that hasn’t historically been possible with Medtronic pumps. The device weighs about 5.1 grams more than the 530G with battery inside. It’s also slightly larger, at 2.1 inches wide, 3.78 inches high and .96 inches thick (compared to the Revel design that is 2.0 x 3.6 x 0.8). But really, when you hold both side by side, there’s not much realistic difference in size or weight between the two generations.

Color Homescreen: It offers a bright full-color screen (!) that adjusts automatically to lighting situations, so for example at night it won’t light up as brightly as it might during the day. Chief Patient Officer Louis Dias described the 630G as having a screen that you can touch and it “comes alive,” and Medtronic clarified that the 630G is not a touchscreen device; you’d have to hit a button to wake it up. The homescreen displays information like Insulin on Board (IOB) right on the homescreen, alongside other pump and CGM data. The new screen appears to be much easier to read, a great benefit for anyone with visual impairments. The device itself will only be offered in black (as opposed to multiple colors in the past), but you can buy a number of different skins to color-up your device.

Predictive Alerts: Just like the 530G, this new system includes the same predictive alerts for high and low blood sugars 30 minutes in advance, along with customizable alerts in both audible and vibrate modes. You can also adjust these alerts, using a combination of different alerts or make them louder or quieter depending on your preferences, we’re told.

Sets, Strips & Reservoirs: The 630G will use the same infusion sets and Contour Next test strips as existing Medtronic products. This new device is approved for the 300-unit reservoirs only and not the smaller 180-unit ones (but in theory you may be able to prime the 630G longer in order to use the 1.8mL reservoirs).

New Meter + Remote Insulin Bolusing: The Bayer Contour Next Link 2.4 meter paired with this system looks the same as the previous generation, i.e. thin and plugs into a computer USB drive. It will allow you to program a manual bolus or pre-determined bolus from your meter to the pump, but the meter itself will not include a smart bolus wizard (the pump feature that calculates an insulin bolus based on BG data or carbs). Still, this meter pairing may be appealing to many.

Better CGM Sensor? The 630G uses the same Enlite sensors used with Medtronic’s 530G system, which are FDA-approved for 6-day wear. Medtronic calls this SmartGuard technology, and it’s the cornerstone of their next-generation CGM tech. The company that with the 630G, it’s made “several improvements recently to the chemistry and other manufacturing changes to significantly improve the performance of the sensor.”

New Guardian Link Transmitter: While the 630G uses the same Enlite CGM sensor, it will sport a new transmitter. It’s still shaped like a seashell like past generations, but the new Guardian Link transmitter has a different radio frequency inside. Sadly, no changes to adhesives or stickiness for now.

One-Press Serter: The system includes Medtronic’s new One-Press Serter that it says will make sensor insertion easier and more comfortable. It requires just a single button press during the entire insertion process, compared to the previous-generation serter where you had to push the button twice (once to insert and once to retract).

Suspend On Low: With the Minimed 530G, we’ve come to know the “Threshold Suspend” feature that automatically shuts off insulin for up to two hours once you hit a certain Low glucose level. That feature remains, except now it’s being called “Suspend On Low.” More catchy and straightforward, no?

Pediatric Use: Medtronic tells us this is FDA-approved for ages 16 and older, meaning if you want it for a younger teen or child, a doctor would have to prescribe this off-label. Some physicians don’t mind doing that, but many understandably have concerns about off-label prescribing. Medtronic says it’s exploring an expanded labeling for younger CWDs.

No Minimed Connect: Sorry, this new 630G device won’t talk to the data-sharing Minimed Connect app that MedT launched last year. The reason: as mentioned, this uses a different radio signal than the one built into the 530G that communicates with Connect. The new 630G does not have Bluetooth built in (no word why not?), but Medtronic says it’s exploring how it can bring connectivity into its future generations of D-tech.

Bigger Batteries: Since the color screen sucks up more battery power, the 630G uses AA batteries instead of the Triple As used in previous generations. Medtronic encourages people to use lithium batteries for best energy use.

Accessories: Medtronic says it will offer 5 different color skins for purchase to pimp up your pump, so to speak — as well as pump clips that are different because of the orientation change; as of now, they won’t offer a holster.

Customers can place new orders for the 630G now, though Medtronic says it will likely be 6-7 weeks before those devices start shipping. Customers can use the online form to check out options and even sign up for a six-week trial program.

For existing users, Medtronic is offering a upgrade choices in what it calls the Pathway Program, with different options depending on patients’ eligibility, communications director Janet Kim tells us:

While these upgrade prices are what we’ve been told, we’re also hearing from Medtronic’s customer service reps that nothing is 100% set in stone and it could be 90 days from the announcement before those actual costs are finalized.

For the 630G launch on Thursday afternoon, Medtronic held a 24-minute video chat on Facebook Live, with two company execs introducing the 630G and answering patient questions in real-time. They didn’t get into many specifics of the new device, but largely promoted it as a new option in the “Medtronic family” offering choices for people with diabetes. We think it’s pretty brave and forward-thinking to take the launch directly to the patient community. And in case you’re wondering — yes, they did catch some flack from people who are dissatisfied with their products.

In particular, people are miffed that the 630G does not include Bluetooth, so customers must now choose between a new, innovative-looking color device and their interests in data-sharing and mobile health connectivity. For an FDA-approved device in 2016, that is disappointing.

At the same time, this 630G paves the way for the next-generation 670G hybrid closed loop system; that’s based on the same new pump platform. Now FDA has already approved that platform, which will hopefully make for a smoother and quicker journey toward 670G approval in the coming months.

We’re also anxious to see Medtronic what’s next on a couple of other key D-tech efforts from Medtronic, including:

IBM Watson app: Still in development, this app will supposedly bring a new level of cognitive analysis to CGM data and help predict high and low blood sugars even further in advance.

Glooko Data-Sharing: This collaboration made headlines in Summer 2015 and again earlier this summer, with promises of allowing Minimed CareLink users to upload diabetes data to the Glooko platform for easy viewing online, on smartphone apps, and for sharing data with others. We haven’t seen this yet, but it has to be coming soon…

Android compatability: Word is, it’s coming this Fall. We’re excited to see that (even if it won’t immediately be immediately applicable to the new 630G device), as well as the not-yet-defined new “digital health solutions” that Medtronic is developing with Samsung per announcements over the past year or so.

Whether you love Medtronic or not, this is all positive news. Just think how far we’ve come with diabetes tools and solutions — especially given that Medtronic pumps have looked pretty much the same since that initial Minimed 502 insulin pump in 1983. Now we finally get a new look and feel, along with more powerful features.

Here’s to the future, Medtronic.