Written by Mike Hoskins and Amy Tenderich on September 29, 2016

Wow, what a huge moment for the Diabetes Community! 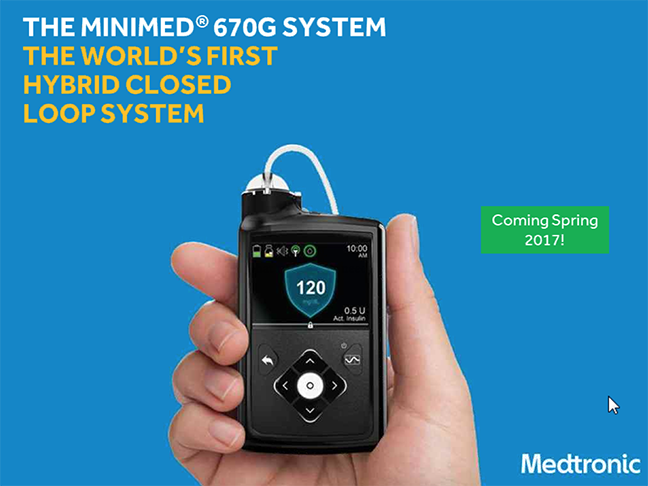 This comes with a firestorm of excitement because it is of course the closest thing to an FDA-approved "" ever to hit the market, yet there are also community grumblings about how the AP label is being used to describe this new technology.

While we in the Diabetes Community realize that it's not a fully closed-loop AP that takes over diabetes control completely, and Medtronic itself is being careful to refer to it as a "hybrid," the new Minimed 670G represents a HUGE step forward in automating our disease management. Woot!

Here's the official letter from the FDA to Medtronic about this clearance, as well as the .

Remarkably, this regulatory approval comes only 104 days (!) after Medtronic submitted thousands of pages of documents, which is seven months earlier than expected and this approval caps more than a decade of research, policy, and product development in getting to this milestone.

“This is phenomenal, and I’m so psyched!” says Aaron Kowalski, Chief Mission Officer of the JDRF and longtime type 1 himself. “It’s amazing to be at this level. Think about it -- this is the first time one of these (automated systems) has been approved… and the short time it took the FDA to clear this. "

So, just what is this new glucose control system, and how does it work?

The term "hybrid" in this case means the system is partially automated but still requires some control by the user.

The way it functions is that the CGM sensor reads glucose data every five minutes, and the closed loop algorithm built into the pump uses that information to increase or decrease basal insulin to keep glucose levels as close as possible to the target of 120 mg/dL. Users still need to enter carb counts and bolus amounts for meals, and alert the system in advance of any exercise. It also does not give automatic correction boluses based on CGM, but it does suggest correction amounts when a fingerstick result is entered just as all standard insulin pumps do now through the Bolus Wizard feature.

does a nice job explaining the details. The MiniMed 670G System has two modes, one more "autopilot" than the other, but both require user intervention (thus, not a completely closed loop):

Manual Mode - in which the system can be programmed by the user to deliver basal insulin at a pre-programed constant rate. The system will automatically suspend delivery of insulin if the sensor glucose value falls below or is predicted to fall below a predetermined threshold. The system will also automatically resume delivery of insulin once sensor glucose values rise above or are predicted to rise above a predetermined threshold.

This is a new type of device never before seen on the market -- and the fact that it's approved here in the U.S. first, before hitting the European and international markets, can hardly be overstated. 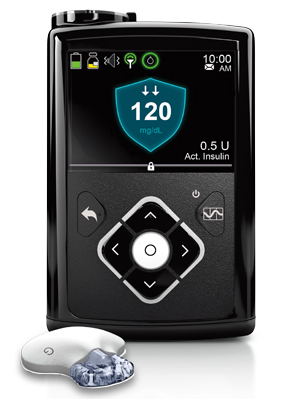 The big difference is that this insulin pump-CGM combo is controlled by a sophisticated algorithm Medtronic dubs its "SmartGuard Hybrid Closed Loop technology," which can make those automatic adjustments to basal insulin and auto shut-off when needed. The product specifics are as follows:

There are a lot of "moving parts" that need to be in place pre-launch here in America, they explain, plus they're currently sitll in the midst of the Minimed 630G launch; that previous model just recently began shipping to patients in the U.S.

Yes, there will be an upgrade pathway to anyone using current Medtronic products -- called the Priority Access Program. It's actually encouraging customers to start on the Minimed 630G in the coming months before the 670G hits the market, advertising that a transition like that will help patients train for the new platform and potentially reduce their out-of-pocket costs to low as $0.

The Priority Access Program runs through April 28, 2017. Medtronic also says more offers and upgrade possibilities may be revealed closer to launch time in the Spring.

Of course, Medtronic will also be working in the coming months with payers and insurance companies on coverage for this technology. With all the recent controversy over these issues (#DiabetesAccessMatters), we hope Medtronic keeps in mind that while many patients will want this system, it may not be the best choice for all -- and choice matters!

The JDRF issued a news release on Wednesday,  expressing excitement about this landmark technology and how quickly the FDA moved. The American Diabetes Association also chimed in with a news release on this approval, noting its significance.

Think about it: Ten years ago, many still thought a closed loop system of any kind was a pipedream. But JDRF laid out a real blueprint on moving toward an Artificial Pancreas. That was still the very early days of CGM technology... and look how far we've come!

"This moved incredibly fast, and it shows how important all the hard work was that we did on the policy side back in the day, to create guidance for these systems," said Kowalski, who personally played an important role in making AP tech development a priority. "That changed everything and created a pathway, and now we're here. It's massive, truly a watershed moment that has the potential to transform diabetes care!"

Whether you consider the Minimed 670G an "Artificial Pancreas" or not is almost beside the point... The fact is we have a device now that's closing the loop in ways we haven't seen before, constituting an early AP generation. It's potentially life-changing technology that's been made available in record time.

In fact, the FDA gave market approval for this Minimed 670G while also requiring additional post-market studies aimed at better understanding how the device works in real-world settings. That shows the FDA is willing to look at existing data and trust the benefits, without holding back for reams of future data.

The journey is pretty amazing indeed, as captured in this post by D-Mom and longtime JDRF advocate Moira McCarthy Stanford on how the organization paved the way to this milestone and beyond.

We also spoke with Jeffrey Brewer, who heads up Bigfoot Biomedical that is developing its own closed loop system expected to be available sometime in 2018. Along with Aaron Kowalski, Brewer is considered to be one of the "Fathers of the AP" given their role in helping to develop and promote the closed loop pathway at the JDRF.

"We're excited that the FDA is moving faster and is more supportive of automated insulin delivery systems and we look to be aided by the same winds!" Brewer told us.

No doubt, this will move the needle forward on the more than 18 other closed loop systems in the works -- especially those that use insulin only. Some add the additional hormone glucagon to the mix to combat hypoglycemia (like Beta Bionics iLET and Pancreum Genesis), which may require more FDA evaluation time.

We're happy to hear our friends within the do-it-yourself community at #OpenAPS are also excited about this newest approval, and what it means for all of us.

It's great to see the FDA moving so quickly, not only on this Minimed 670G approval but with other exciting diabetes tech and data developments in recent years. Clearly, the FDA is recognizing the #WeAreNotWaiting movement, and doing its best to keep up with these fast-moving times.

It's worth noting that the FDA also gave the green light on Wednesday to the Abbott Freestyle Libre Pro system here in the U.S.

This is not a consumer device, but the clinician version of Abbott's new Flash Glucose Monitoring (FGM) technology that's already available to patients abroad.

Also referred to as a "hybrid" system -- but only for glucose monitoring -- Abbott Libre consists of a small round sensor worn for up to 14 days on the back of the upper arm, and a controller that users just swipe over it as many times per day as needed or desired to take wireless glucose readings.

It doesn't offer any alarms for rising or dropping glucose levels, and the consumer version abroad stores just 8 hours of data. The aim is to create a simpler monitoring solution that could also help many type 2's be more in touch with their glucose levels in real-time.

While not a traditional CGM as we know it, Abbott says the regulatory rules classify Libre as a CGM. And what they've approved now is a version designed specifically for doctors to lend to their patients for short-term use, and it only provides blinded data for the doctors to view. It's a first step towards the consumer version, which Abbott has also recently filed for FDA approval here in the States.

Hopefully, that will be coming soon, with FDA's seemingly escalated innovation fast track.

A huge thanks to all those involved -- not least those at FDA -- for moving these important diabetes care tools forward in all of our best interests!

Written by Mike Hoskins and Amy Tenderich on September 29, 2016