While I was off at spin class this morning, I’ve been bombarded with emails about this exciting announcement at the iPhone OS 3.0 preview event going on now:

Lifescan has unveiled an iPhone application that lets users upload glucose readings from their connected blood glucose monitors to their iPhone. “The meter will transmit your data over Bluetooth or the dock connector,” according to the device experts over at Engadget, who are liveblogging the event.  Cool!  I believe it’s the OneTouch Ping model we’re talking about here, based on the posted photos and the fact that that meter is already wireless-enabled. 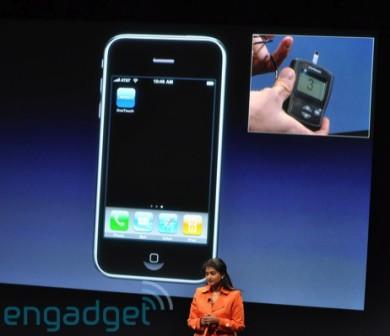 “The app then lets users send their readings and a message about how they’re feeling to caregivers like their parents, children or physician. The glucose reader app also includes a meal builder and insulin schedule for easy tracking by tagging readings as pre- or post-meals. The iPhone app can even estimate, based on diet, how much insulin is needed after each meal. The app also shows glucose levels in a chart form and lists each previous reading.” 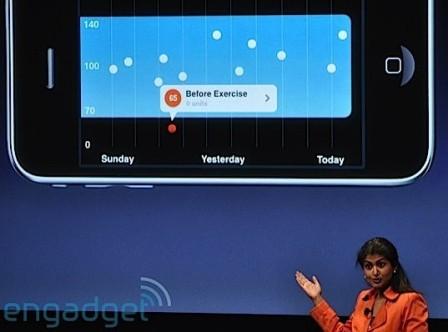 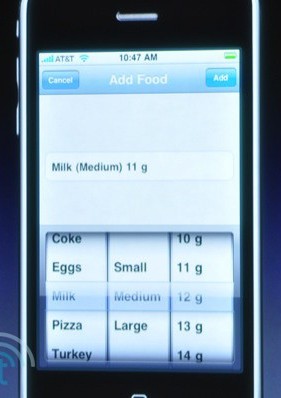 OK, we all know I’m gadget geek. But this looks amazingly cool and useful (love the roll-screen selections, shown above!). Certainly it’s going to be a lot more useful than most current iPhone apps for diabetes, like DiabetesLog, which require you to enter a bunch of numbers manually.  Not useful, sorry!

Of course you have to be a current OneTouch Ping system user to take advantage of this app, so that cuts out a lot of people. Still, kudos to Lifescan for moving in this direction. Looks like they’re the first, but certainly won’t be the last.  From Engadget’s live-blog: “A cool idea, but we’d like to see just a small dock connector that functions as the finger pricking device. Are we asking too much?“

Nope, if you ask me: it’s got to eventually be all-in-one for true utility…

Anyway, I’m delighted. This is the closest thing I’ve seen so far to Apple getting into diabetes.

btw, thanks for the tips, everyone!