In Search Of: The Highest Diabetes A1C in History

My most recent A1C was nothing to be proud of, but I consoled myself with the thought that it was hardly the worst in history. That got me wondering: What was the all-time worst A1C? Who holds this dubious record, and how high is it possible to go? I decided to pound the pavement and try to find out.

So where to start when looking for a diabetes record? Well, with the Guinness Book of World Records, of course. But oddly, the Guinness people don’t seem to have any listings related to A1Cs. They do, however, report that Michael Patrick Buonocore survived a blood sugar of 2,656 mg/dL upon admittance to the ER in East Stroudsburg, PA, on March 23, 2008. Michael was a T1 kiddo at the time, and that record-high sugar level was part of his diagnosis experience.

So does Michael also hold the record for top A1C? No. Because while he’s living (thankfully) proof that stratospheric blood sugar levels are possible, a sky-scraping A1C requires both altitude and time. Remember that A1Cs provide a three-month average of our blood sugars. Individual high BG readings, even crazy-high ones, don’t alter the test as much as you’d think if they last only a short time. Because type 1 in kids Michael’s age hit so quickly, I figured his A1C would have been rather middle of the road. It takes a slow burn to make an A1C boil.

The highest A1C turns out to be a tricky piece of data to ferret out. If you try Google, you find a gazillion people talking about their own personal highest A1Cs, and comparing notes with others, rather like prostitutes comparing bra sizes. And oddly, the scientific literature on the subject seems moot, too.

Of course labs can calculate higher A1Cs. I think the highest I’ve ever seen personally is something in the low 20s. If your A1C was, say, 21%, it would take a three-month average blood sugar of 556 mg/dL.

How is that possible? If your blood sugar were in the 500s, wouldn’t you go into a coma long before the three 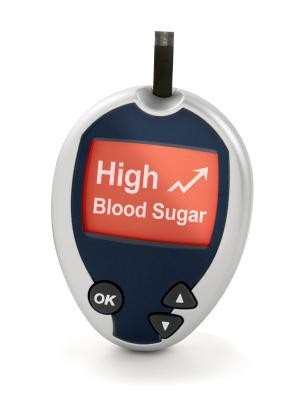 months were up? Well, I would. And if you are type 1 like me, yes, you would, too. But type 2s don’t generally go into comas because they have insulin in their bodies all the time, even if they can’t process it well enough to keep their BG at safe levels.

But that doesn’t answer the question of what unlucky sod holds the record for highest A1C ever. My wife’s ex-boss told her she had once seen a 27%, but that’s apocryphal, so I decided to talk to my own colleagues to see what they had to say. I spooled up LinkedIn and sent an email out to every endo I am linked to, plus a couple of diabetes educators.

I had my money on 35%. That would be a three-month blood sugar average of an even 1,000. But the answers I got will surprise you. They surprised me. No, actually, I was shocked by their answers, and I don’t shock easily. None of my esteemed colleagues have ever seen or heard of A1Cs as high as I commonly see.

Straight from the Endos

First up was Dr. Silvio Inzucchi of Yale, the diabetes guru who’s the author of my favorite go-to ebook for clinical facts: Diabetes Facts and Guidelines. (It’s dryly named, but still one of those wonderful little pocket books like my own Taming the Tiger.) Dr. Inzucchi tells me, “The highest we usually see is in the 12-14% range. I think I’ve seen an 18% a long time ago.”

In the same ballpark is Donna Tomky, a practicing CDE at Albuquerque Health Partners and past president of the AADE (American Association of Diabetes Educators). She tells me, “Over the years I’ve seen an A1C as high as 19% in a type 1 individual who purposely omitted insulin and was admitted for DKA.”

Another endo I reached out to is Dr. Shara Bialo, who’s actually a fellow type 1 and now practices at Brown University’s Hasbro Children’s Hospital. She has the same kind of clinical gear I do. She tells me, “When we see patients in clinic, we get the point-of-care A1C. If it is higher than 14%, it simply reads >14%, so you have no idea if it’s 14.1% or 19%.” However, when one of her patients lands in the hospital, a serum draw is done. “The highest I have seen personally is a 17%, but my colleague had a patient with a 19%.” She says both were “teenagers with established type 1, one of whom just found out she was pregnant—eesh!” (You can see why I love Dr. Shara.)

Dr. David Hite of Kaiser Permanente/HealthDoc reports: “I had a patient in the clinic with a 17%. That’s rare. I usually see new diabetics in the clinic under 14. They come in because they feel like crap and can’t tolerate conditions needed to get it higher.”

Huh. That makes sense, but I’m always amazed by how crappy people can tolerate feeling before seeking medical care. At least here where I practice…

Dr. Hassan Ibrahim of PAR Hospital in Iraq tells me, “I have came across a patient who had very poor glucose control. His HbA1c test result was 16.7%.”

Top of the pack, but still lower than I expected, and I’d bet well below the real record, whatever that is. So why are the pros seeing so much lower numbers than I had expected, or than I see myself? I think it might be because endos and diabetes specialty clinics usually see type 1s, who can’t survive long in the high-octane environment needed to clock impressive A1C scores. That honor has to go to our T2 cousins, who are typically seen by GPs (general practitioners). Maybe I was just asking the wrong docs. The problem is that GPs are generally too damn busy to answer emails from nosy health journalists.

And the Lab Results Show…

Next, I contacted some labs to see if they could tell me what the highest score they could theoretically measure would be. Sitting down? I started with the Mayo Clinic’s lab, by talking with Dr. Darci Block one of the bigwigs there in the Clinical Core Laboratory Services Division. Much to my surprise her gear, although no doubt more expensive and accurate than my pint-sized machine, gives the same answers. Higher than 14% just reads >14. Dr. Block also had a hard time understanding why it would matter, insisting that a reading “up to 14 is more than adequate” because, and I’m paraphrasing here, at that point the patient is in deep shit and how deep the shit is “not clinically important.”

I see her point, but I disagree. If someone were at an A1C of 22 and lowered it to 19, that would be clinically important to me. And to them. It’s certainly not out of the woods, but it would be on the right path. I would think any clinician would want to see that progress.

But Dr. Block also pointed out, quite correctly, that with crazy-high numbers interference needs to be considered, and that any system that would test higher would likely have a significant error range. For what it’s worth, she’s seen readings as high as 17% in her career, using a different type of gear than Mayo uses, and she’d never heard of one higher. 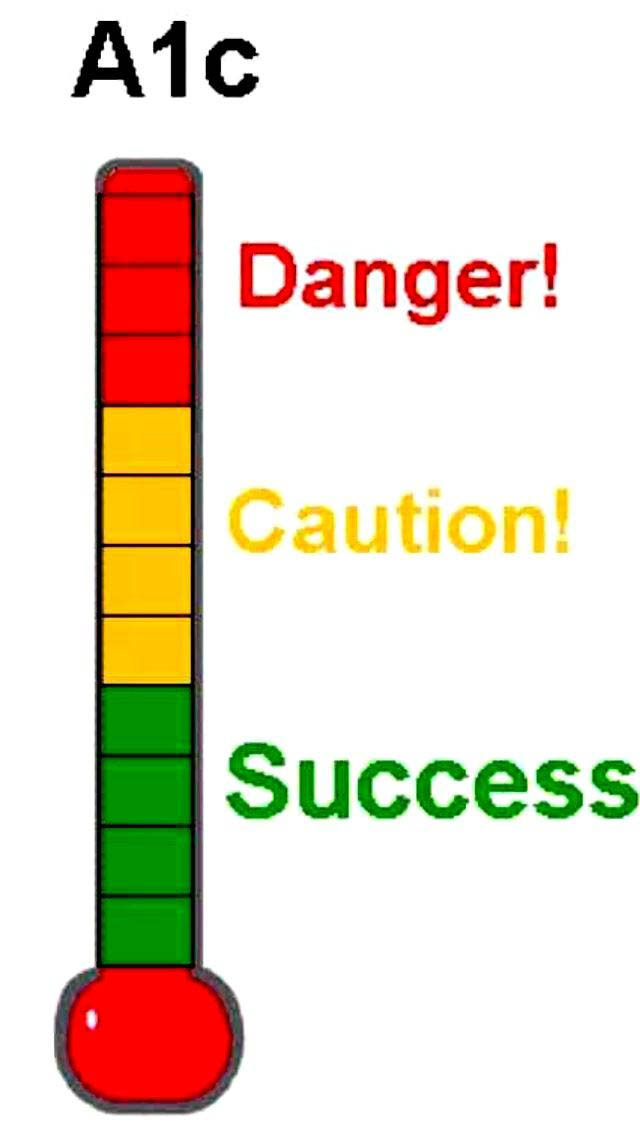 Next I touched base with Lab Tests Online, an outfit that ranks high in search engine results when it comes to all manner of lab questions. But they told me: “We are not a lab ourselves, so we do not perform any testing. Rather, we are a web resource to help patients better understand those lab tests that they do have performed.” Oops. Well, given that their logo is an image of an Asian woman in a lab coat, wearing a face mask, and holding a test tube, it’s a mistake anyone could have made.

Finally, David Goldstein the University of Missouri Health Sciences Center, Diabetes Diagnostic Laboratory told me, “I do not know anyone who keeps track of this, but as I recall, the highest level I have ever seen in a patient with diabetes was about 18%. That reflects a mean plasma glucose of about 400 mg/dL.  In newly-diagnosed children with type 1 diabetes, the average A1C is about 10-12%.” (Just like poor Michael in the Guinness Book of World Records!)

But Goldstein went on to point out an interesting fact that no one else did: “There is a practical limit to how high the A1C can get because the kidneys filter out and excrete glucose from the blood when the plasma glucose level gets over 180-200 mg/dL. This is called the renal threshold for glucose, and (it) differs among people. Only in people with kidney failure or with a high renal threshold can the plasma glucose level be sustained at a high enough level to result in a very high A1C.”

So that means that while I couldn’t discover who had the highest ever A1C, we now know that whomever holds that dubious honor also has trashed kidneys. Which brings me back to my straw poll of physicians, in which Dr. Block of Mayo felt that too high is just too high and the specific digits don’t matter.

Maybe she’s right there. And I like how über-diabetes educator and author Gary Scheiner of Integrated Diabetes Services put it, more colorfully:

He told me that beyond 12% A1C, “A little bird should pop up and just start humming Purple Haze.”