Today we’re at Stanford School of Medicine conducting the 2013 DiabetesMine Innovation Summit — a gathering of key stakeholders in which patients act as catalysts for change.

We’re excited to share with you all the results of our patient-views-on-diabetes-tech survey, being unveiled at the Summit today. Here’s the scoop:

The DiabetesMine 2013 Patient Voices Survey has found that according to patients, the factors that would most improve their quality of life are not being sufficiently met by diabetes technology currently in the market. The survey shows patients attribute this to two factors: one being the technology itself, and the other being limitations on access to the devices.

The DiabetesMine Patient Voices Survey includes data from nearly 800 patients and caregivers active online, and was conducted in the summer of 2013. It was promoted here at the patient news site DiabetesMine.com, and on TuDiabetes, Diabetes Daily and several other diabetes networking sites. Respondents are therefore a self-selected group of the most active and engaged patients and caregivers.

Participants overwhelmingly stated that the most important quality of life (QOL) improvements they seek are, in order of priority:

Interestingly, “fewer shots” and “fewer fingerpricks” (often touted by vendors and the mainstream media) rated toward the bottom of a list of seven QOL priorities. 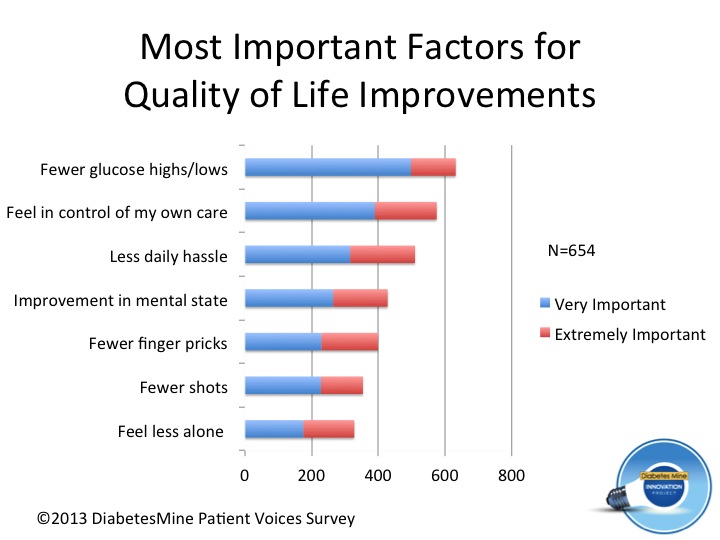 Among this group of highly engaged respondents, over 40% reported that they “never” download or view reports of the results from their fingerstick glucose meters, and 60% never do so with their continuous glucose monitors. At the same time, almost 35% said they do use software or mobile apps for diabetes data logging once a month or more.

Respondents indicated that the changes most needed to make diabetes logging data more valuable to patients, in order of priority are: 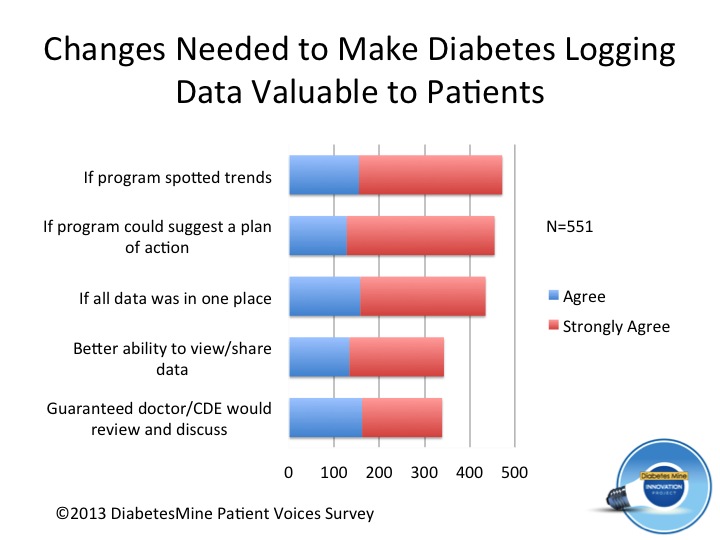 In addition, survey respondents entered more than 3,200 written comments in response to a number of open-ended questions; a consistent theme was frustration over lack of interoperability and integration (with other devices and with Mac/Apple iOs), and lack of data sharing capabilities. 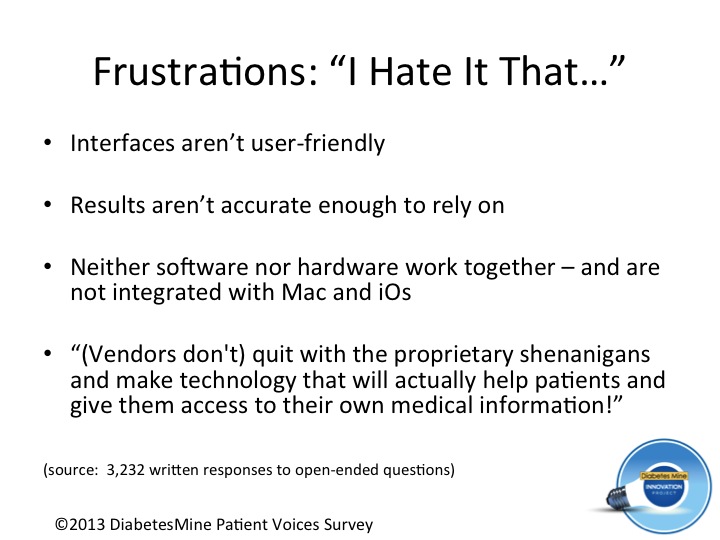 When asked about overall use of smartphone apps for diabetes purposes, less than one-quarter of these highly wired patients reported using them. Even among those who did, use of diet and food apps ranked first, followed by exercise tracking, and glucose logging apps ranked last, being used by only 19%. 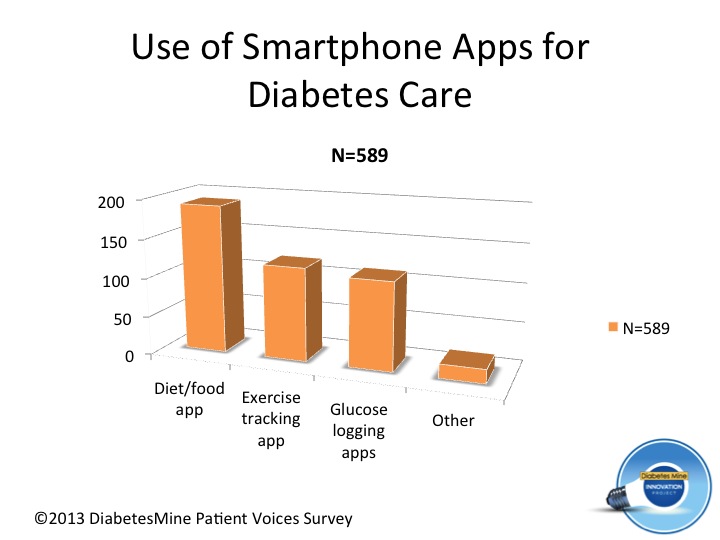 When asked to rate their biggest frustrations with current diabetes tools, respondents overwhelmingly chose “too expensive” over issues of design or ease of use. 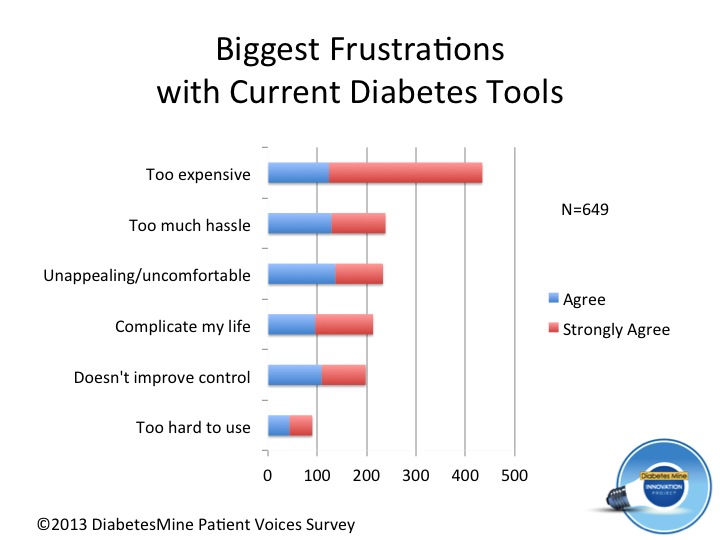 Two-thirds of respondents also stated that access via their insurance is “highly influential” in the diabetes tools they choose to obtain and use. 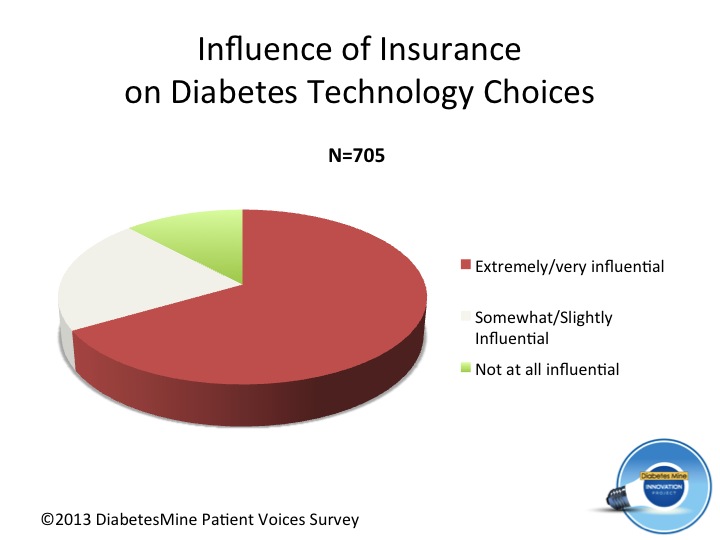 Emphasis on the financial burden was underscored in a question about use of continuous glucose monitors, powerful devices that have nevertheless been slow to gain mass adoption. When asked to rank the biggest drawbacks of these devices, 45% ranked “out of pocket costs too high” as a bigger issue than other common complaints, including “annoying alarms,” “uncomfortable to wear,” “too much time investment,” and “need easier way to analyze the data.” 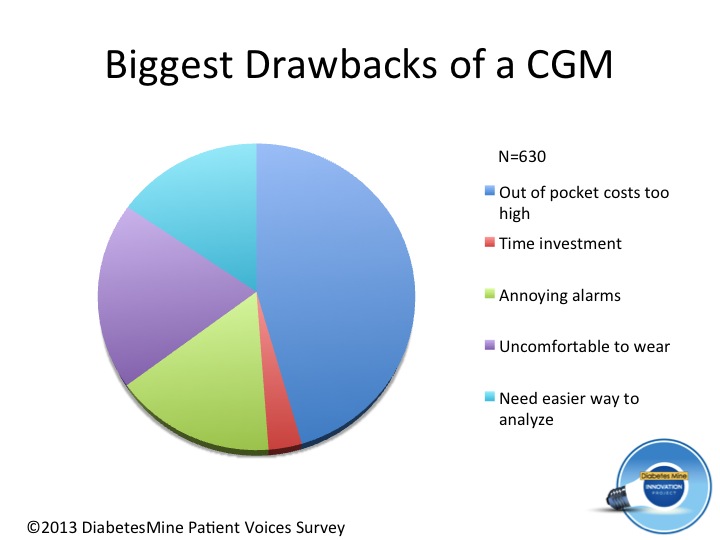 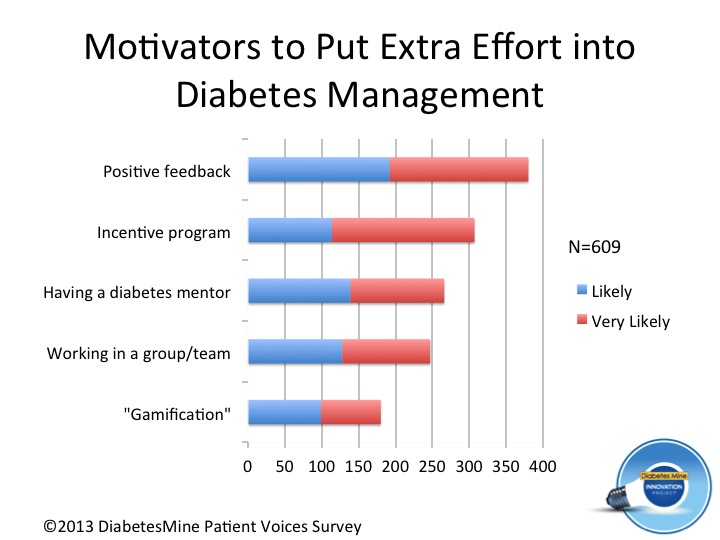 In the comments section, respondents consistently mentioned the desire to:

With the Healthcare Establishment’s current emphasis on Patient Compliance/ Medication Adherence, these responses appear to highlight a need to gain better understanding of patients’ real-world concerns and motivators.

When asked which outcome measures Insurers should focus on most in determining which diabetes tools to cover, respondents indicated that two factors are of nearly equal importance to the currently used A1C (test of three-month glucose level averages): 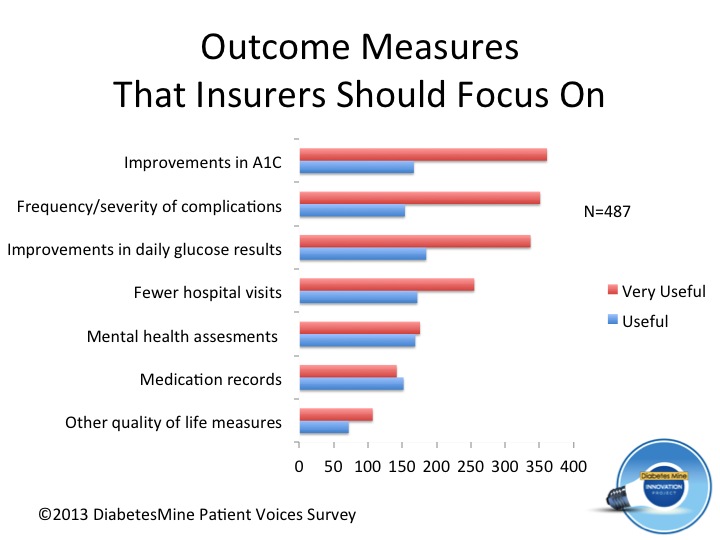 In the extensive comments section, survey participants called for Insurers to broaden their focus beyond the A1C test, which “does not sufficiently reflect the current or long-term well-being of patients with diabetes.” Respondents would like to see new measures of “patient satisfaction, better overall health and fewer complications.”

To this end, survey participants called for diabetes decision-makers to help them with the following:

We have a nifty infographic summing this all up, coming soon. Plus the full report of survey results will be posted on Slideshare shortly.

Our great hope here at ‘Mine is that the Powers That Be can use this information to better deliver on the promise of diabetes technology — the topic of today’s Summit, of course!