Ask D'Mine: Healthy TV Dinners + Exercise (with a Side of Diabetes)?

Got questions about life with diabetes? So do we! That’s why we offer our weekly diabetes advice column, Ask D’Mine, hosted by veteran type 1, diabetes author and community educator Wil Dubois.

This week, Wil’s chewing on the topic of TV dinners — you know, those ready-made meals that may not be the healthiest choices, or … ?

{Got your own questions? Email us at AskDMine@diabetesmine.com}

Ken, type 2 from the Alabama, asks: Is there such a thing as a healthy TV dinner? I’m 68 years old with a physical disability so I’m not getting any physical exercise and I do not cook so I eat TV dinners. I also have very little physical energy and a 43-year history of hypertension. Do you have any suggestions for what I could do to get in better condition and build my physical strength to a normal state for my age and condition?

No. There’s no there is no such thing as a healthy TV dinner. However, some are healthier than others. And to their credit, TV dinners have come a lonnnnnnng way since the aluminum-tray, sodium-packed Swanson’s quick meals of my youth.

Speaking of Swanson, they didn’t really invent the TV dinner, but they’re the ones who successfully commercialized them. And how. TV dinner sales boomed from the beginning in 1953 right up until 2008, when sales began to flatten, then drop. And while TV dinners seem to be losing their popularity, they are still nearly a $9 billion (yes, with a “B”) annual biz in the United States alone.

Let’s look at two different TV dinner brand’s approaches to the same meal to show you how much the “healthiness” can vary. We’ll compare a classic TV dinner to an alternate frozen meal that’s marketed as being the healthy choice. Literally.

For the classic, of course, I chose Swanson first, as they were first to market back in the day. btw, Swanson is now owned by Pinnacle Foods, whose corporate motto is “Reinvigorating Iconic Brands.” Pinnacle is some sort of corporate black hole that’s sucked up dozens of classic brand names from the golden age of the supermarket: Armour, Aunt Jemima, Birds Eye, Duncan Hines, Mrs. Paul’s, Vlasic, Wishbone, and more. The Pinnacle folks call Swanson “an American icon of convenience,” but rather inconveniently don’t include any nutrition data about their TV dinners online. They only seem to publish data on their potpies and mac n’ cheese.

Oh, wait. I was wrong. Never mind. It was hidden here. 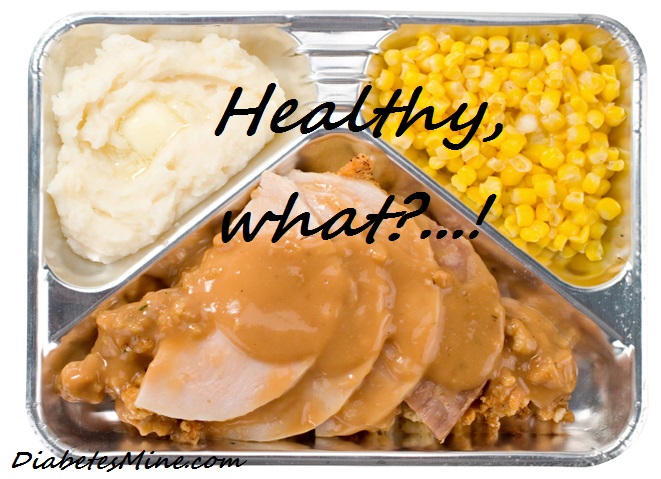 Let’s compare that to a “Healthy Choice” brand Salisbury steak dinner and see which is the, ah… healthier choice. Healthy Choice, btw, is owned by Con Agra, who also sells the low-end Banquet brand TV dinners, as well as Marie Callender’s TV dinners, and Reddi Whip, and Hunts, and Slim Jim, and Swiss Miss products. Oh, and Orville Redenbacher popcorn, too. The nutrition facts are blank at the Healthy Choice website, so I had to use a third-party fat and fact checker…

So the Healthy Choice is, technically, the healthier of the two, with fewer calories, a lot less fat, and a lot less sodium. Carbs, which will drive blood sugar impact, are about the same. Oh, and to be fair, the sides are a bit different. The Swanson meal comes with mashed potatoes, corn, and an apple-cranberry dessert. The Healthy Choice meal comes with with cubed potatoes, green beans, and a caramel-apple dessert.

Both manufactures described their deserts as “delicious.” I’ll have to ask the D’Mine Test Kitchen crew to eat one of each and report back.

Price? Well, oddly, TV dinner prices don’t seem to be posted on most websites, with both Walmart and Target telling me to see my local store for prices (probably because both chains sell the same products for different prices in different parts of the country). I’m on deadline here, so I can’t run out the local grocery store to check for you, but I’m guessing that Healthy Choice has a premium markup over Swanson. Still, they are TV dinners. That means they are heaps cheaper than eating out, while being heaps more expensive than cooking from scratch.

I won’t compare any other brands here today, but WebMD has a a list of the top “healthy” TV dinners; and The Daily Meal made up a list of both the top 15 Healthiest TV diners, and a list of the 10 unhealthiest TV dinners. But you get the idea: Not all TV dinners are created equal and you really need to spend some time comparing labels to see what you’re getting. In short, you need to get label savvy. And given your disability, diabetes, and hypertension, I think you should try to shoot for lower calorie and lower sodium choices.

But while some TV dinners are healthier than others, a TV dinner diet really isn’t all that healthy. You’d need to scarf down a lot of TV dinners every day to get the recommended daily 2½ cups of fruits and veggies for your age.

And I’m actually worried about your lack of energy, and wondering if poor nutrition might be playing a part in that. Still, I can see how the TV dinners make sense for your lifestyle, and I have an idea on a way to make your meals more nutritional without wearing you out further in the kitchen. Plus, it’s actually easier than cooking your TV dinner: “Health-up” your TV dinners by adding a serving of pre-packaged fresh bag-o-salad or fresh veggies for dipping to the meal. All you have to do is add the dressing, and you can get that ready to eat while the TV dinner nukes.

While it might sound like I’m down on TV dinners, nothing could be farther from the truth; there’s always a small inventory in my family’s freezer at home. I mean, really, what’s not to love? A ready-to-eat, break-glass-in-case-of-emergency meal that can sit in the freezer for months on end waiting for a Manic Monday?

Personally, I’m fond of the Annie’s brand, mainly because they have a gluten-free line, but I’ll warn you that they’re a pain in the ass to nuke, with variable steps at different power settings. They taste pretty good, too, but I don’t think any of the modern microwave TV dinners are as tasty as the old-school oven-baked ones of yesteryear. I think this is because despite much innovation and research, some foods just don’t come out of a microwave as well as they do out of an oven. I’ve never had microwave fried chicken (or French fries) that I thought were worth eating. I guess you can still put the modern cardboard tray TV dinners in the oven, but if I’m breaking out a TV dinner, I can guarantee you it isn’t on a day where I have 45 minutes to cook an “instant” dinner!

And while we’ll break out the TV dinners now and again, I do put my foot down on eating the damn things (or much of anything else, for that matter) in front of the TV. We do TV dinners at the kitchen table—my house doesn’t have a dining room—with wine and music and conversation. Eating in front of the TV is a recipe for overeating, as the TV has a way of shutting off the brain. The worst thing you can do is sit in front of the boob-tube with a quart of HÃ¤agen-Dazs and a spoon. Hey, who ate all the ice cream?!

Although… come to think of it… I guess if you are going to eat in front of a TV maybe you should eat a TV dinner. At least it’s a self-limiting portion.

Now, to your question of building up physical strength. For folks like you, I’m a big fan of chair exercises. Even if you can’t get up and get around easily, there are all kinds of things you can safely do to work your muscles while sitting down. Exactly what that would be for you would depend on the nature of your disability, so check in with your doc. But examples might include ankle weights or a pedal exerciser to work out the leg muscles, and mini dumbbells (or even commodity canned goods) to work out the arms.

So work out a little at a time as much as you can. Disabled doesn’t need to mean inactive. And when you shop for your TV dinners, spend some time with the labels to get the healthiest option and health it up further with a salad or maybe some fresh fruit.

Oh, damn. Speaking of food, I just remembered it’s my turn to cook tonight. Hmmmm…. Maybe tonight beef’s not what’s for dinner. Maybe it will be Saturday with Swanson.

And what the hell, I wonder what’s on TV tonight?

This is not a medical advice column. We are PWDs freely and openly sharing the wisdom of our collected experiences — our been-there-done-that knowledge from the trenches. But we are not MDs, RNs, NPs, PAs, CDEs, or partridges in pear trees. Bottom line: we are only a small part of your total prescription. You still need the professional advice, treatment, and care of a licensed medical professional.