All About the Fitbit (with Diabetes)

May is a busy-busy month. Among many other observances, it is national “Exercise is Medicine Month,” celebrating the role of fitness in keeping us healthy. Not surprisingly, there are many new apps and techy tools to help us with this, too. One of those is a popular little gadget called the Fitbit, featured just last week on the Dr. Oz show.

Turns out, our very own cartoonist and social media maven Mike Lawson has been testing this thing out from a PWD perspective for the last few months. Don’t miss his review of its usefulness:

Special to the ‘Mine by Mr. Mike Lawson

I’ve been known to bring incredibly spicy dishes to friendly game nights to distract my opponents.  And in kindergarten I used to complain about my duck to goose ratio.  So when I learned about the Fitbit — a fancy pedometer that tracks your daily activity and syncs it to a website where users can add friends and see one another’s activity — I knew that I had to get one (and have a higher activity rate than my challengers…I mean “friends”).

The Fitbit is a $99 small black plastic clip that looks much like a Bluetooth headset.  The simple design includes just one button that you push to cycle through the OLED display to see the number of steps you’ve taken, how far you’ve gone in miles, how many calories you’ve burned and your activity level (which is displayed as a flower…the taller the flower, the more active you’ve been).

The Fitbit can be carried around in your pocket, or hooked onto your belt or clothing.  It then uses a three-dimensional motion sensor (similar to the technology used in a Nintendo Wii remote) to track your movement.

Fitbit can also monitor sleeping habits.  The device comes with a cloth wrist strap so you can wear it to bed.  The Fitbit will track all of your movements in the night and report back to you on how “efficiently” you slept (by taking a percentage of how long you were in bed versus how long you were motionless — maybe a little “off” for deep sleepers who just roll around a lot). 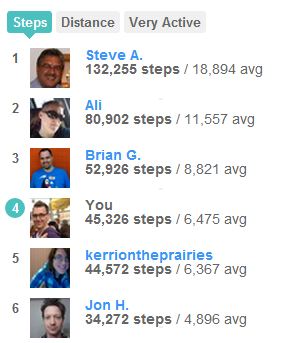 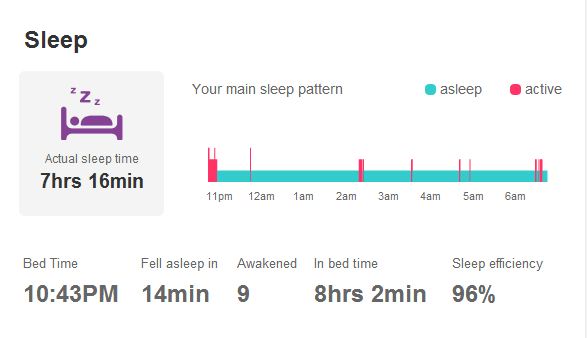 So as far as fitness, I knew that I needed to move more, but I wasn’t ready to start a gym routine or get a personal trainer.  My Fitbit did a great job of motivating me to add movement to my normal routine.  Immediately after I started wearing my Fitbit back in March, I found myself parking at the far end of parking lots, choosing the stairs over the elevator, and walking around the block before bed to boost my daily activity score and help me reach my goal of 10,000 steps per day — with the happy side effect of helping my glucose numbers stay in range.

In addition to activity logs, users can log calories and glucose measurements on the Fitbit website.  As a person with type 1 diabetes, I was originally excited by the idea of having my glucose and activity logs all in one place.  I soon found out, however, that the basic glucose logs do not support the traditional glucose testing regiment of a person with diabetes.  Basic members are given the ability to log three glucose measurements per day (morning, afternoon, evening).  And if you become a premium Fitbit.com member (for $49.95 per year) you can log unlimited glucose measurements, but the website does not give you the ability to make notes about the readings (“post meal” for example).  Grrr. Clearly, the developers need a better understanding of what PWD users need.

Aside from the incomplete glucose logging feature, the Fitbit fails short in a few other areas too.  It does not have the ability to track heart rate.  Without this feature, the “calories burned” report is based solely on height, weight and gender.  And it is possible to share your data (including calories eaten in a day and current weight) with your Fitbit friends, so users have to be aware of their privacy settings to avoid sharing “embarrassing” data accidentally.

If you aren’t the kind of person that obsesses over and analyzes data, or if you’re not interested in competing with, checking in on and socializing with your friends that are also using a Fitbit, you’d be much better off purchasing a cheaper pedometer (I’ve seen them as low as $10).

All of the extra features are fun, and have motivated me to add small amounts of activity into my normal life, but to be honest, I have found myself sneaking into the elevator more frequently now that the initial excitement has waned.

Yet I don’t see myself giving up on my Fitbit since it requires so little effort on my part to track activity.  Once I have the Fitbit in my pocket, I can forget about it.  My data syncs to the Fitbit.com website every time that I’m within 15 feet of my computer and the Fitbit base station that comes with every Fitbit.

Overall, the Fitbit has been a great motivator, and has helped me figure out the amount of activity I do every day.  The glucose logging feature still has major room for improvements, but nevertheless I believe that my friends in the DOC can benefit from the other features.

You can purchase a Fitbit directly from their website, or at many electronics stores.  The retail price is $99.95 (with free shipping if you buy it directly from the Fitbit site).  If you do buy one, find me on Fitbit.com and add me as a friend — and be prepared to be out-stepped!

Thank you, Mike, for piquing our curiosity!